Review: BANG! #1 is James Bond but Much, Much Weirder

One of the most notable things about Daniel Craig’s tenure as James Bond is the linear storytelling aspect of the films. While other Bond flicks would call back to each other (the recurring villain of Blofeld being the prime example), the stories were mostly one-off adventures. Stringing then along into one tale, took some serious plot examinations. You’d have to explain a lot of inconsistent plot elements, the biggest of which being: why does this one character keep entirely changing his appearance? Enter Dark Horse’s latest spy thriller, BANG!

BANG! uses James Bond lore as a plot device, stringing together a series of seemingly inconsistent adventures all about one appearance-altering, forever-young superspy. That spy is THOMAS CORD. Cord is an agent of MI-X, the hyper secret British Intelligence Community tasked with taking down Goldmaze, a cult turned globe-spanning spy ring. Goldmaze believes that the reality around them is fictional, and is willing to commit acts of terror and crime worldwide to discover the truth. Can Thomas Cord defeat Goldmaze while at the same time discovering the truth behind his own memories that seem to belong to someone else? What does speculative fiction writer PHILLIP VERVE have to do with the Goldmaze conspiracy? And most importantly, should you pick up the first issue of this weird spy thriller?

If you’re a massive fan of the James Bond franchise, as writer Matt Kindt clearly is, then you should absolutely add BANG! to your pull list. Kindt writes the trippy, conspiracy-ridden world of Thomas Cord to be action-packed and mysterious, breaking down all the best parts of the film franchise and reassembling them into a well-paced, meta sci-fi action-adventure. This book was just plain exciting to read, dragging nowhere and asking interesting questions that will keep the pages flying through your hands. Not every comic can pull off a title that’s just a loud onomatopoeia, but BANG! makes it look easy.

If there’s one piece of the pilot that could’ve been a bit better, it’s the main character. Thomas Cord begins the story questioning who he is, wrestling with memories that aren’t his and starting to doubt the reality around him. Of course, that’s a thrilling conflict to have in a story, but it requires a character that’s at least a little defined. It was hard to empathize with Cord’s struggle when we know so little about him. This said, there are plenty of other characters to carry the pilot to its explosive conclusion, including a writer who (may?) hop between realities and a brilliant Goldmaze double-agent, so it’s easy to forgive a protagonist who’s not 100% engaging. 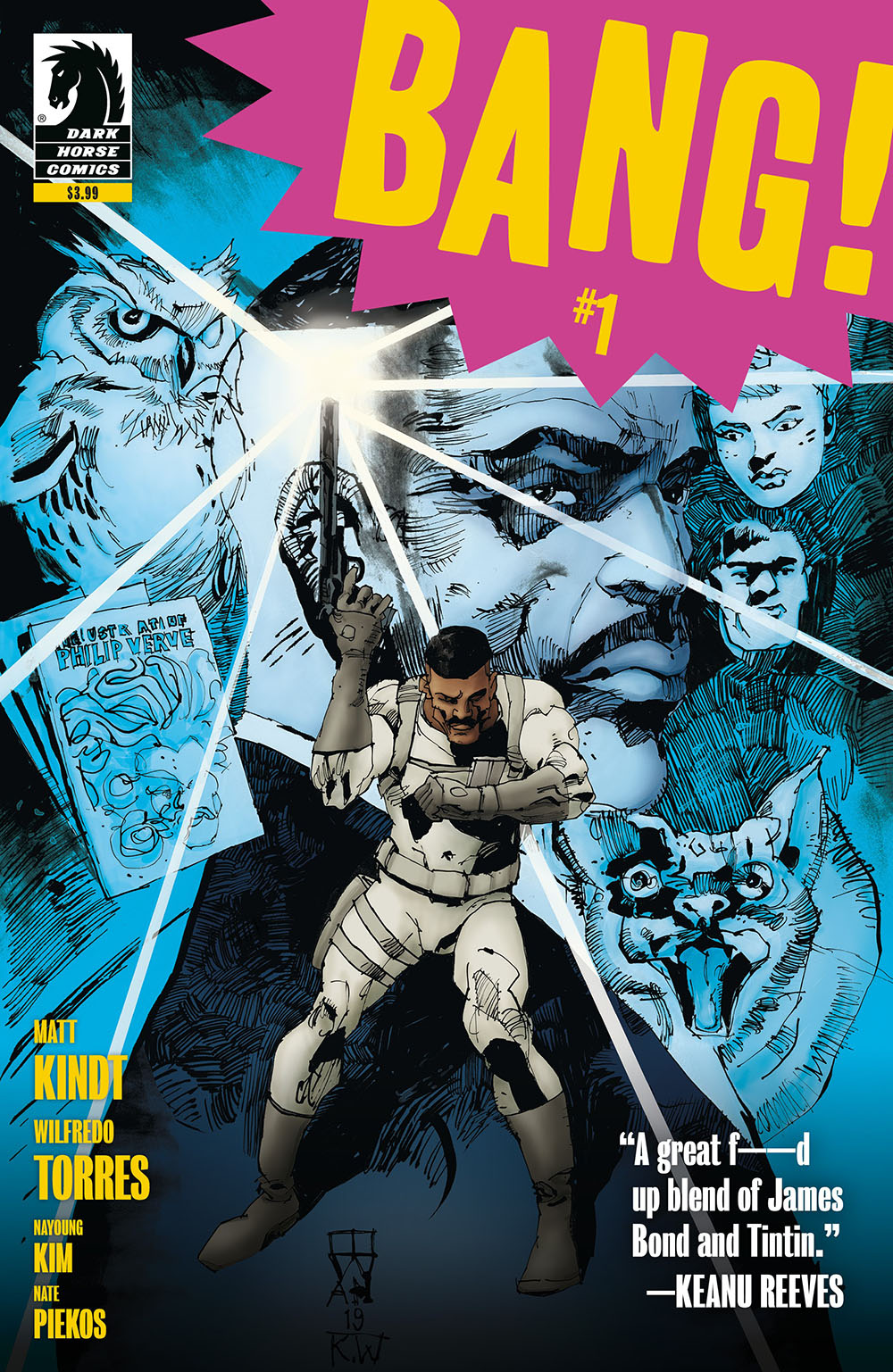 Even if you’re not a James Bond fan, you should pick this book up just for the team of artist Wilfredo Torres and colorist Nayoung Kim. Their imagery is psychedelic and fluid, like watching a John Wick fight scene on LSD. But don’t think that what they’re doing is just set dressing, some cool colors on an otherwise ordinary spy plot. Their work shakes the reader out of their own reality, making them question (in a good way!) what they’re looking at. In Torres and Kim’s art, we see the ideal way to build a great mystery in comics; they keep the reader’s focus on what really matters to get the plot details in, but throw in enough strangeness to point to larger secrets. If you’re a comic creator, pick up this book as a great lesson in the craft.

And in case you are the aforementioned James Bond devotee, don’t think that the art in this book will let you down. Torres and Kim have used the same tie-dye patterns that made the old James Bond posters so fun and woven them on top of a story that’s equally as mind-melting.  If you ever find yourself thinking of modern spy-fiction as a little too grim and gritty, let this book change your mind. 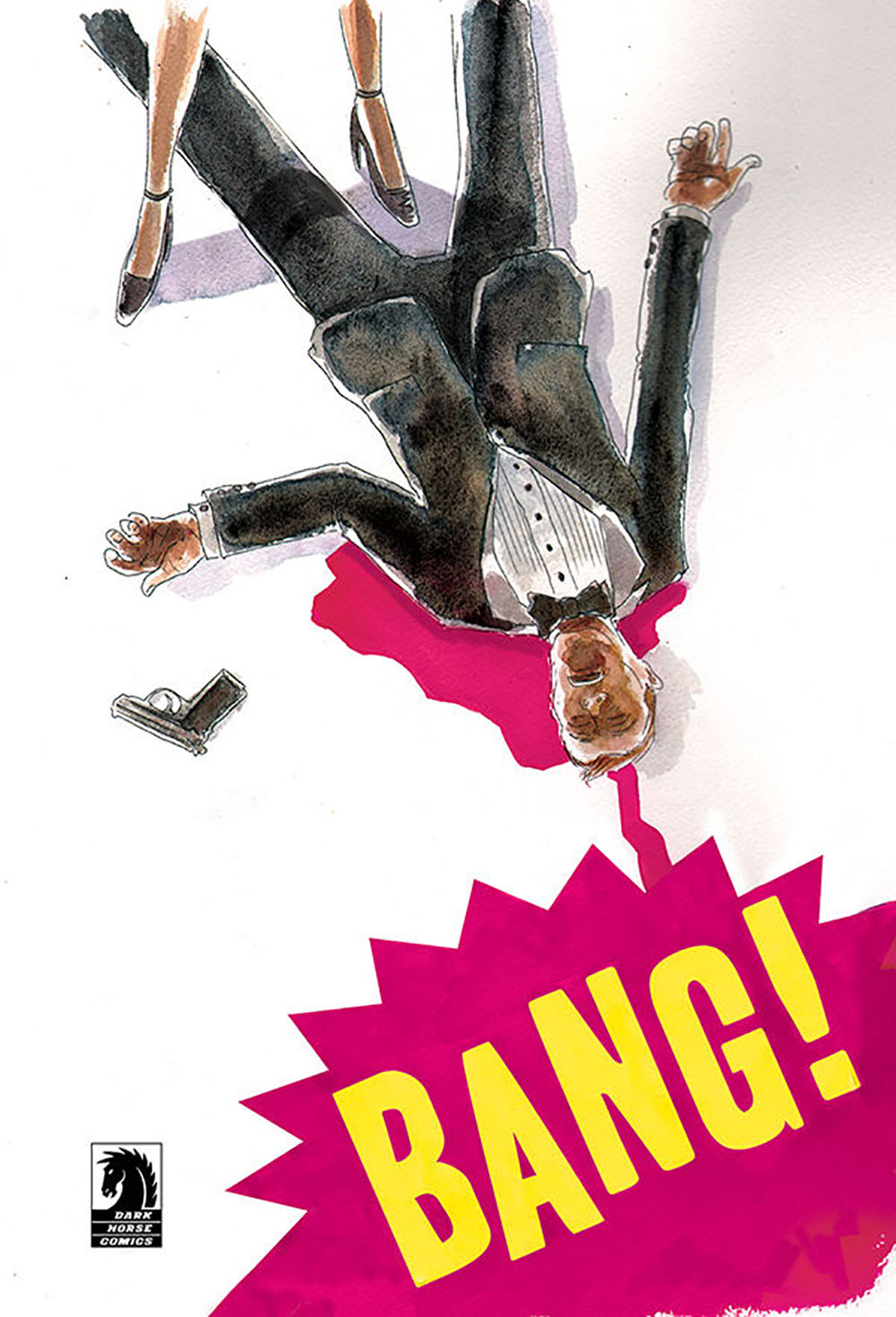 If we haven’t already convinced you, BANG! is kind of a head trip of a story. So, it’s important to have elements of the book ground you in what you’re reading. The lion’s share of that burden goes to letterer Nate Piekos. Piekos’s letters are clear and simple, a welcome contrast to the weird imagery swirling around it. At the same time, Piekos does an exemplary job of letting those images breathe, giving his speech bubbles positions that allow the viewer to be untroubled by the text, even on especially wordy pages.

BANG! #1 is an excellent pilot to what might be one of the best non-cape comics this year. It isn’t afraid to ask big questions or let the reader be in a place of not understanding for a while. With snappy pacing and artwork that will completely remove you from the real world, BANG! #1 is a smart buy for fans of weird fiction, artists like Mike Allred and Tradd Moore, and of course, the James Bond franchise. If that sounds like you, pick up a copy on February 19th, then let us know your thoughts by following us on Twitter. We’ll be back to talk about Issue #2, so be sure to keep your eye on Monkeys Fighting Robots.

Review: BANG! #1 is James Bond but Much, Much WeirderNot every comic can pull off a title that's just a loud onomatopoeia, but BANG! makes it look easy.