Black Hammer/Justice League #1 by Jeff Lemire, Michael Walsh and Nate Piekos sets up one of the most interesting, mysterious and unique company/character crossovers we have seen. It’s a superhero ‘event’ as only the Black Hammer family could do.

A strange man arrives simultaneously on Black Hammer Farm and in Metropolis, and both worlds are warped as Starro attacks! Batman, Green Lantern, Flash, Wonder Woman, Superman, and more crossover with Golden Gail, Colonel Weird, and the rest of the Black Hammer gang! 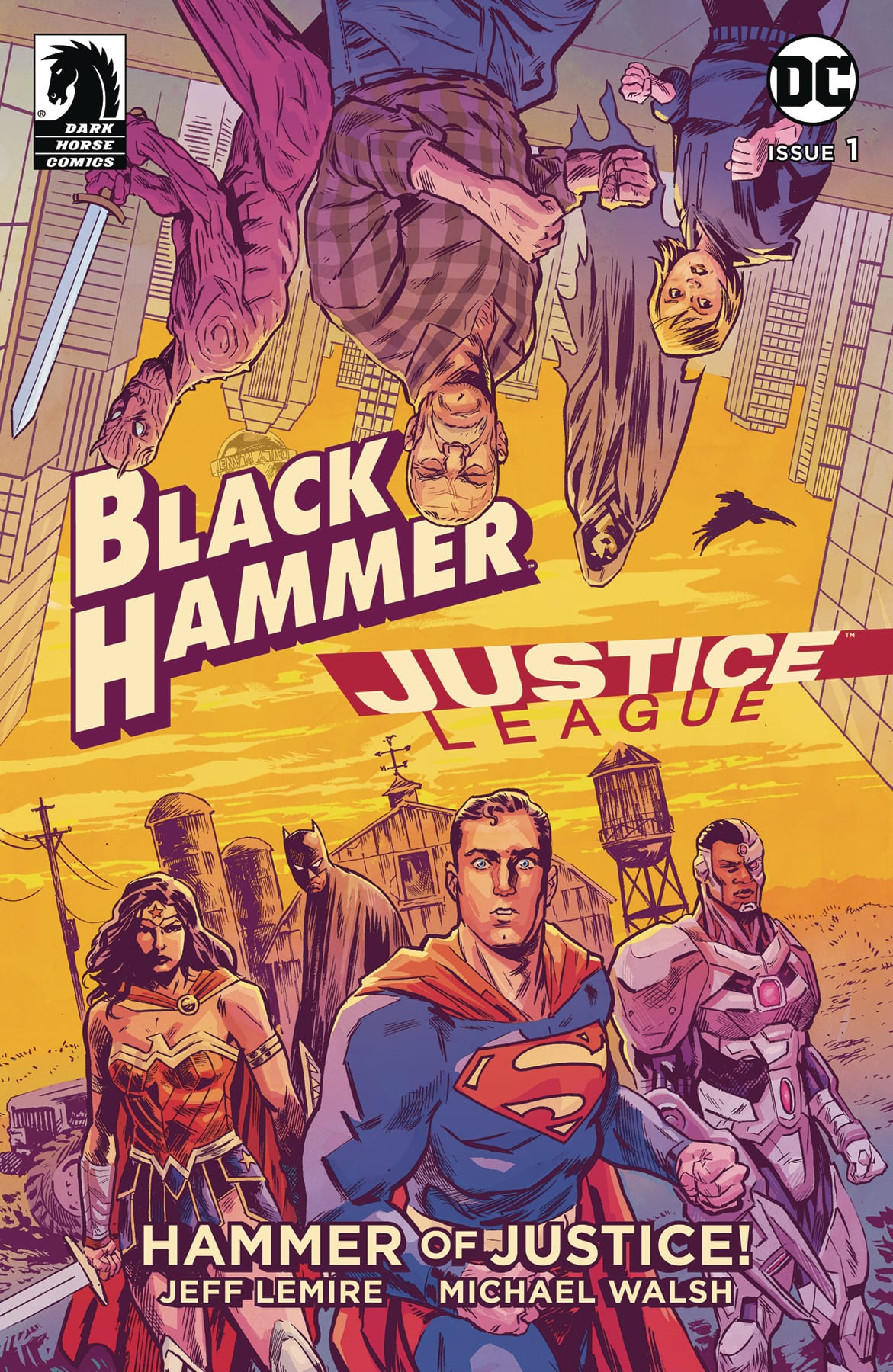 Black Hammer has always been a comic that is ABOUT comics. In telling his own unique superhero epic, Lemire and company have also been playing with genre tropes and expectations. So bringing in a well-known property like the Justice League opens up all kinds of possibilities. This initial issue is mostly set up and it’s simple (mild spoilers will follow): a strange man appears to both the Black Hammer characters and the Justice League; he switches the places of both. Oh, and the JL were fighting Starro when it happens. So now we have the JL characters living on the idyllic ‘farm’ and the BH dropped right into the middle of a fight with a giant space starfish. Either situation is now ripe for awesome possibilities.

Lemire also does a great job making this accessible to new readers that maybe aren’t very familiar with BH. Comic fans will, of course, recognize what the various BH characters are supposed to represent, but casual readers are given enough info to get a grasp as to who these characters are. The Justice League is well known enough, and Lemire (who has written the JL characters before in various comics) writes them a way that is very recognizable.

The story also seems to be very important to the overall ongoing Black Hammer mystery, so diehard fans this is not just a cash grab or throwaway ‘event’. It fits in with everything that has been going on.

All of the various Black Hammer books always have great and unique art. This one is no different. Michael Walsh falls in line with all the other BH family of artists. The linework here has one foot in the superhero world (especially in the JL scenes) with the layouts, dynamic poses and energetic panels. And the BH scenes perfectly match the more scratchy, muted and ‘eerie’ feeling the main title gives out. Walsh is handling pencils, inks and colors and just straight up doing a bang up job. Like all Black Hammer books, it’s very pretty to look at.

If you have or have not been reading Black Hammer, then Black Hammer/Justice League #1 is a must buy. It’s a perfect introduction to this world for new readers AND it’s thrown a wrench in the ongoing mystery for the longtime fans. It’s truly the best of both worlds.

If you have or have not been reading 'Black Hammer', then 'Black Hammer/Justice League' #1 is a must buy. It’s a perfect introduction to this world for new readers AND it’s thrown a wrench in the ongoing mystery for the longtime fans. It’s truly the best of both worlds. Advance Review: BLACK HAMMER/JUSTICE LEAGUE #1 Begins The Company Crossover We Need