The War of the Realms was fantastic and, of course, frost giants are quite scary. But with this tie-in, writer Clay McCleod Chapman grabs you and increasingly shakes you to the core.

When the story opens by focusing on a dysfunctional family that’s otherwise ordinary, cynical readers might think, “These characters don’t matter; where are the symbiotes?” But McCleod Chapman succeeds where a number of tie-ins fall short because he makes these (mostly) ordinary people dynamic characters. Sadie and her family have the misfortune of coming into contact with a symbiote reminiscent of Venom. In many ways, though, the subsequent infection is a secondary plot. McCleod Chapman focuses his energy on Sadie’s family that’s rapidly fracturing.

For readers who grew up in broken homes, this story will deeply resonate. But everyone can appreciate the power of Sadie’s heartbreak because we all know someone whose experienced a toxic upbringing. From the first page to the finale, the reader roots for Sadie because she’s an innocent little girl in a remarkably challenging situation before the symbiote even arrives. She deserves so much better than the anguish she experiences on a daily basis.

One of the scariest parts of Separation Anxiety, like any good demonic possession movie, is the balance between the ordinary and the macabre. In this case, it comes in the contrast between the monstrous symbiote and Sadie’s stereotypical parents. For every time that the symbiote-infected parents try to infect Sadie and her brother Billy, they talk about how much they want to be together again. In the context of a family that’s about to irrevocably fall apart, this dichotomy is gripping. McCleod Chapman weaves Sadie’s wish to have a happy family throughout the story and the results are devastating. There are no happy endings here, which makes Separation Anxiety feel ironically realistic; any other ending would have felt forced and phony.

In the original Texas Chainsaw Massacre, the dinner scene is physically and emotionally uncomfortable to watch. In an issue packed with stunning visuals and horrifying plot elements, a similar sequence of events in Separation Anxiety deserves to be recognized because it’s hard to stomach.

This scene also showcases some of the best artwork in the comic. On their own, the story beats are gruesome. Sadie’s symbiote-infected mom kills a neighbor, who innocently checks on the family when he hears screams. Later, after the parents chase Sadie and her brother for a while, Sadie stumbles into her mom, who has prepared dinner for the family. But the main course is the dead neighbor himself. The reveal feels like it’s ripped right out of a horror movie.

Level contrasts some normal dinner food (rolls, meat and vegetables) with the neighbor’s charred body. His face looks like that of a zombie or even a mummy but he’s only been dead for a few hours. The choice to show such a rapid decomposition makes Sadie’s infected mom seem even more powerful because she’s the one who killed the guy. Most disturbingly, the mom is in her human form but her dead smile, combined with letterer VC’s Travis Lantham red speech bubble, makes it clear that Sadie’s mom is long gone. Altogether, it’s a chilling sight. 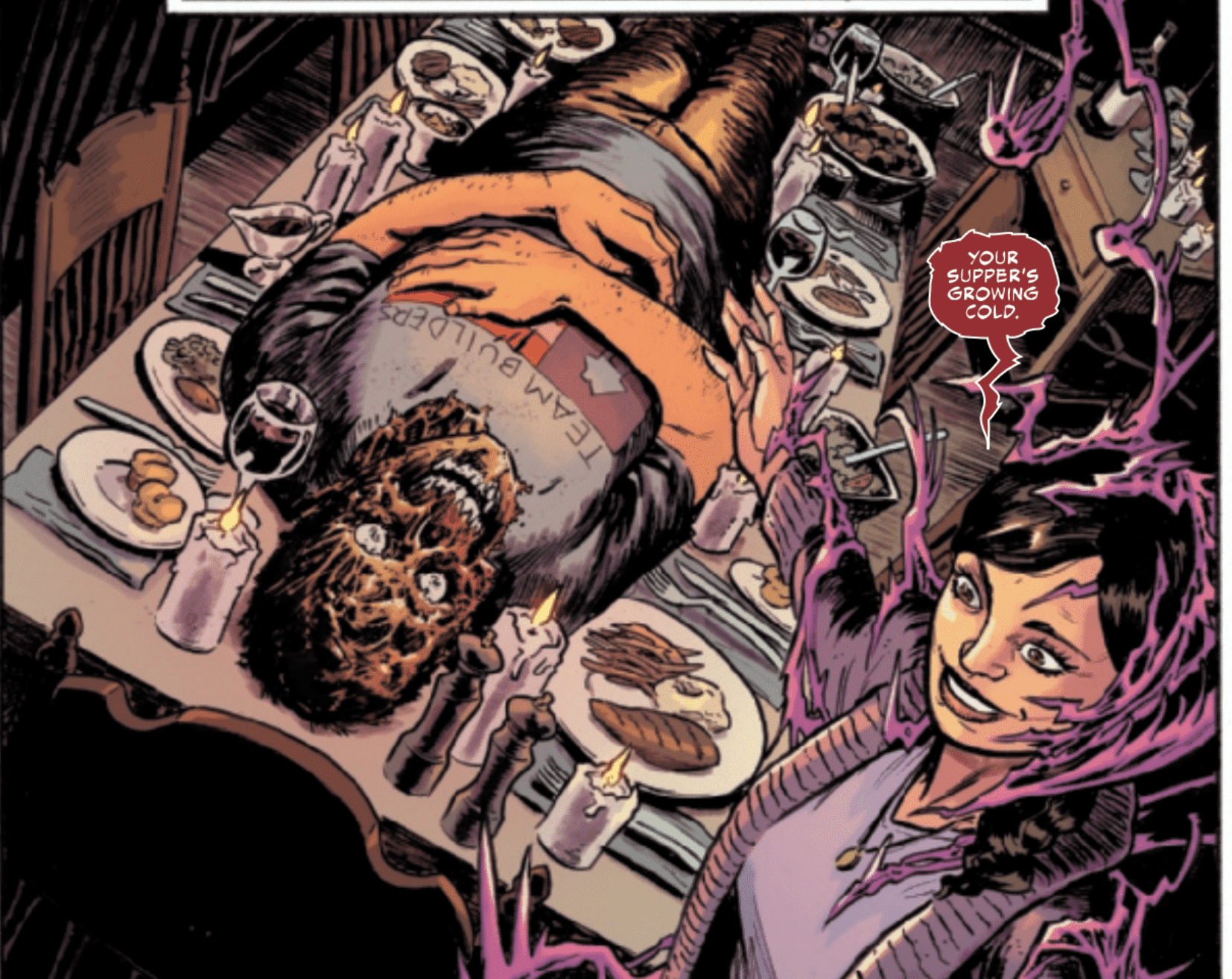 In one of the more shocking reveals, Sadie’s mom shows her daughter what’s for dinner.McCleod Chapman and artist Brian Level don’t leave anything to the imagination. They show the parents and the newly-infected Billy dining on the neighbor’s corpse. Here, the perspective shifts; the reader sees the body from a new angle that hides its eyes and teeth. As a result, the corpse looks even more mummified and it’s even more disturbing to see Sadie’s dad practically drooling over the body. The small artistic touch of having lit candles surround it makes the scene feel like a gruesome ceremony.

As if that wasn’t ghastly enough, the creative team continues to ratchet up the horror. The symbiote-infected family holds Sadie captive while they say grace before the horrid meal. The trio prays to Knull, the god of the symbiotes, before Level shows them munching away on the neighbor’s flesh. Level zooms in on these shots and color artist Jordan Boyd’s usage of browns and oranges shows the body’s decomposition. The image of Sadie, who’s trapped by the symbiote tentacles, crying out of wide-open eyes, drives home the scene’s frightening tone. In an uncomfortable combination, the monsters ravenously pick away at the body while they hold a typical weekday dinner discussion. (The dad asks his son, “Anything exciting happen at school today, bud?”)  Throughout the issue, the creative team masterfully inverts the reader’s expectations at every turn and that’s particularly evident in this scene.

Tie-in comics for major events usually don’t fall in the “can’t miss” category. Most of the time, they don’t feature significant characters or meaningfully progress the overall story. Two of those statements might apply to Absolute Carnage: Separation Anxiety. You won’t see Spider-Man or Venom here and the event is just starting to unfold. But anyone thinks about skipping this issue would miss the best horror comic of the year. If you’re a fan of Marvel or if you like scary stories, read Separation Anxiety. Just don’t do it before bed because it’ll make it impossible to fall asleep.

What’d you think of Absolute Carnage: Separation Anxiety #1? Do you want to see more tie-ins like this?