X OF SWORDS STASIS: Setting The Stage For Battle

To recap, X of Swords is an event within Jonathan Hickman’s Dawn of X Saga. The mutants of Krakoa and Arakko must fight in a tournament to determine the fate of the planet. Arakko, lead by Apocalypse’s first Horsemen (his own children no less), are causing trouble. So the tournament’s organizer, Opal Luna Saturnyne, put this together to deal with them and Krakoa. With ten swordbearers representing each land, the X-Men must fight for the survival of all. But the lengths they’ve gone to retrieve their weapons may already have dire consequences. 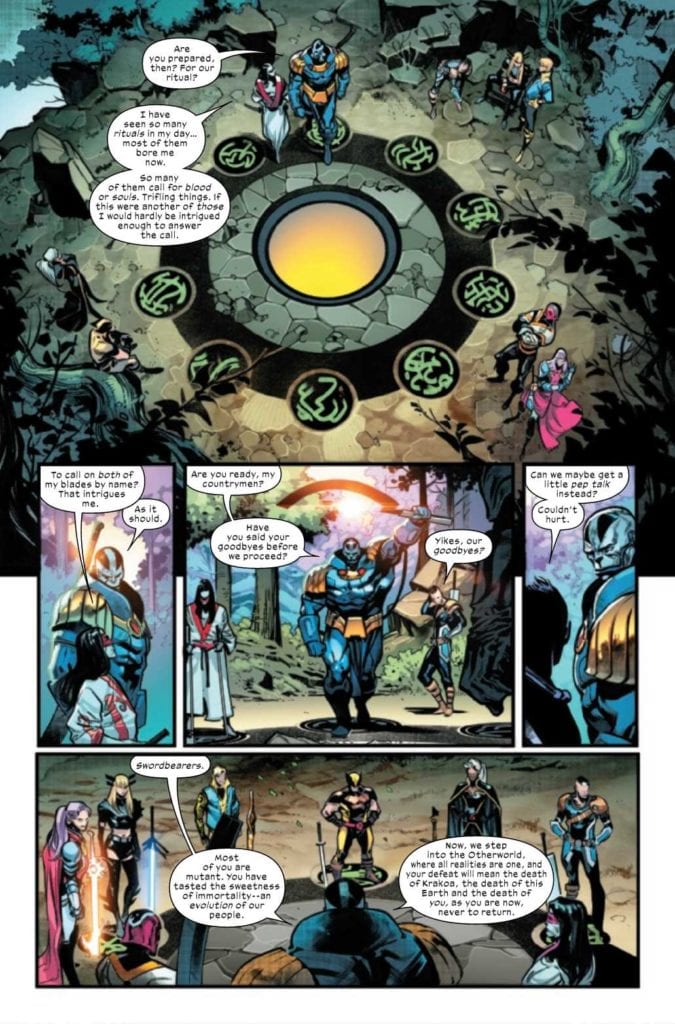 Between an overlapping plot by Hickman and Tini Howard, X of Swords Stasis will shake the X-Men to their core. While it might require a little backstory to get the whole picture, each swordbearer of Krakoa has something to gain and lose from this. Perhaps the one with the most at conflict is Apocalypse. Calling back to his motivations to reclaim parts of his past, he will now have to face the people he loves. You know the old saying, “be careful what you wish for.”

X of Swords Stasis: The Flux of Art 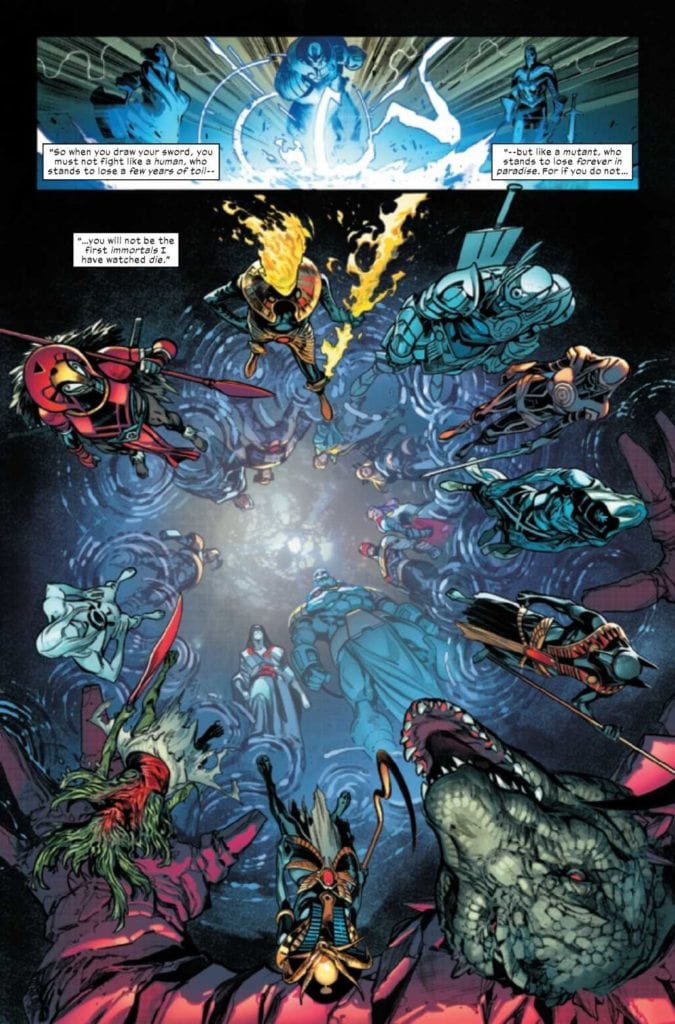 Between Pepe Larraz and Mahmud Asrar, their similar art styles allow them to play off each other. The designs of the swords and swordbearers of Arakko are genuinely creative and display their place in history. A gigantic crocodile man with extra limbs and a khopesh is certainly eye-catching enough for X of Swords Stasis. Especially with the coloring by Marte Garcia, which makes a color contrast in all of the costumes.

VC’s Clayton Cowles provides lettering that defines the actions and character of the person in question. The black word balloons of the Mask of Annihilation hide the identity of its hosts. But when recalling a flashback, the lack of decomposition suggests this host is powerful. So when the mask is removed, the change in word balloons is not just a display of will but also a danger the X-Men might not overcome.

On a smaller note, there is a reoccurring theme with tarot cards. For the ones less versed in the lore, Tom Muller’s infographics provide decent explanations along with the powers and weapons of the Swordbearers of Arakko. All of those tell the X-Men that they will be facing trials ahead that will push them to their limits. Storm’s card, in particular, foretells of something big coming her way.

Arm Yourself For X of Swords Stasis

X of Swords Stasis is best appreciated with a lot of background to see what everyone’s facing. Fortunately, the title shows how much is going into things before the real conflict begins. That way, everyone gets a general idea, and there’s only more to come.

X of Swords Stasis gives everybody a chance to catch up on what's at stake to fully appreciate the conflicts that go into the overall story.X OF SWORDS STASIS: Setting The Stage For Battle