Howard does a good job of bringing together a couple of threads from previous issues while setting up X of Swords. This is no easy task as Excalibur may be one of the most surprisingly complex X-titles. Thus far, Howard created a new Captain Britain in Betsy Braddock, addressed the discontent that both Britain and Otherworld feel for her, created a plot dealing with a bunch of alternate realities created by Jamie Braddock (that readers were in no way eased into), all while having Apocalypse lurking in the background setting, crafting his plans that will now come to fruition in X of Swords. It’s all been a bit difficult to follow at times from issue to issue, but as a trade, I’m sure it will flow more smoothly.

Also, while Apocalypse’s plans for opening a portal out of External bones are revealed in this issue, the full purpose of this portal is revealed in X-Men #12 (review coming soon).

The gem that Gambit grabbed in the last issue is revealed to contain the life force of Candra, one of the External’s, whose power Apocalypse needs to finish his gate. There is definitely a moment of tension in this issue. Readers know that they can’t trust the Externals, but trusting Apocalypse also seems out of the question and could potentially spell future ruin for Krakoa and Otherworld. 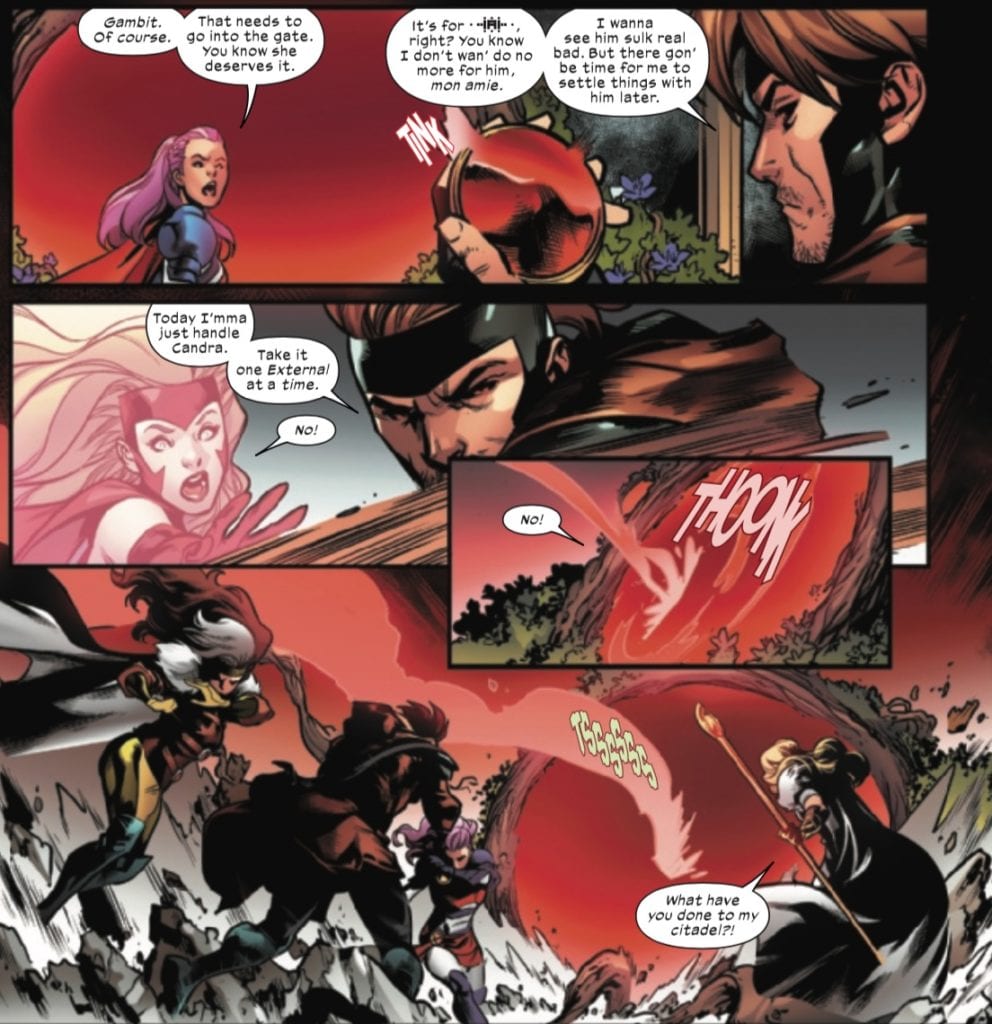 There was definitely a moment when I was rooting for Candra, knowing that Apocalypse’s plans will probably bring plenty of headaches to the X-Men, so there was building tension throughout the issue as Gambit decides what he’s going to do. With this page, drawn by To and Arciniega, as Gambit decides and everything looks like it starts going to hell, as there is a moment of pause before the ground violently shakes, the art team captures this moment very well.

As with most of the X-titles, this issue does rely on its prose sections to fill in readers about certain details that the comic doesn’t have room for. Honestly, these are growing on me. They do allow a brief explanation about, for instance, the Externals rather than making a reader go back and read hundreds of back issues to learn the complex history of all the X-lore.

Maher does have an opportunity to do some unique things with the lettering, particularly on the prose page that lays out and explains the design of Apocalypse’s portal gate and the different components it requires. The explanation, I think, needs explanation, but it still allows for some original design work on Maher’s part.

It’s here. The event that has been teased for months now. X of Swords has arrived, and a vital piece of the groundwork has been laid in this issue. It will be interesting to see if X of Swords will address any of the plot threads revolving around Betsy’s role as Captain Britain or if those will be put on pause. Either way, Howard, Hickman, and the entire X-office are setting up an all-encompassing epic that will be bigger than any of us expected.

What did you think of Excalibur #12? Tell us in the comments below!

Betsy confronts Lady Satyrne, Apocalypse's plans come to fruition, and Gambit makes a hard choice.Review: EXCALIBUR #12 Is Bigger Than Any Of Us Expected