Hopeless and his storytelling techniques stay on point throughout in terms of consistency. One of the best parts of X-O Manowar #3 comes from how it presents the issue’s main theme. Aric is out to find a dangerous warlord and bring him in. To do so without arrests, he agrees to work with tech billionaire Troy to spin the narrative positively. While it works to a degree, not everyone is on the same page. This exemplifies itself when Aric is at breakfast with his found family. Desmond and his mother appreciate Aric and the armor Shanharra’s company, especially when that can lead to Desmond doing better with his grades and a preview to a video game. Everybody is contributing, but no one seems to be connecting until Aric speaks up.

This all translates into Aric’s and Shanharra’s relationship with Troy. Troy certainly has the resources to help Aric out, but he has preferences on how it’s done. Like when he sends Aric to a wildfire zone, and his first thoughts are to save his friend’s mansion. Not only that, he happens to know about the nature of a goop monster that appears in it. Clearly, Troy knows more than he lets on; throughout X-O Manowar #3, he always prefers to have Aric’s consent on major decisions. Rather than work with Aric, Troy seems to be controlling him.

Art Is Always On Point

Laiso makes every scene stand out with impressive detail and line work. Everything from the wrinkles on characters, the architecture, and machinery looks impressive. So impressive, Laiso gives bold lines to everything, making the plot-driving elements more apparent. For example, X-O Manowar is in the background while a helicopter releases retardants on a wildfire. In this case, the helicopter gets the emboldening treatment echoing Aric’s earlier statement; there are things that local authorities can do without the aid of Aric, and he knows that. 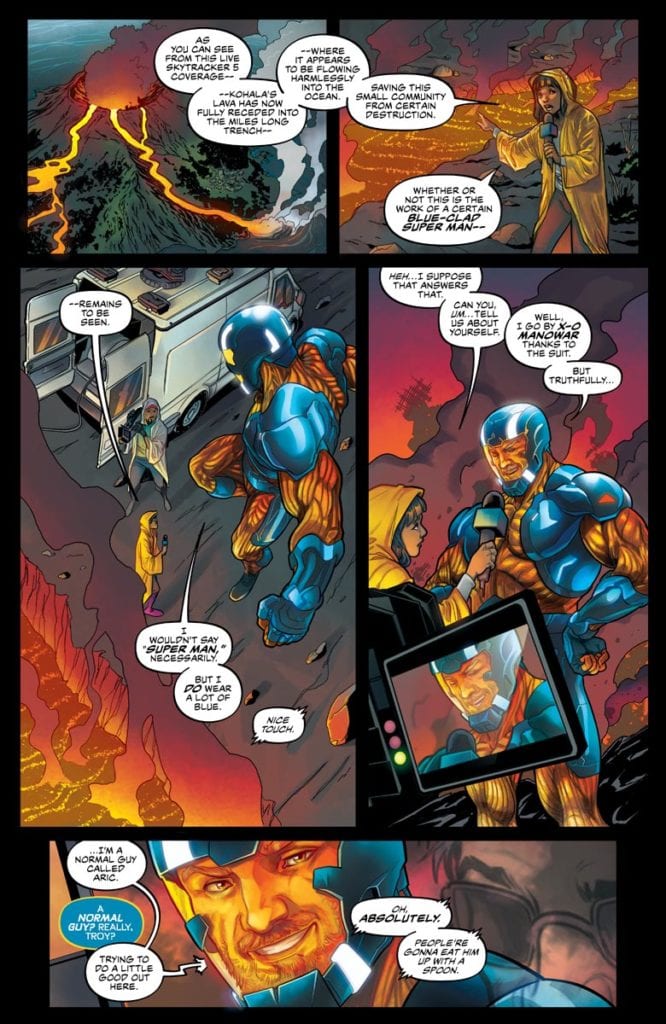 Redmond’s coloring tends to highlight much of the conflicts of X-O Manowar #3. Usually, the brighter colors stand out the most, including the green monster that appears out of nowhere. Among the flames of the wildfire, this demonstrates it as a more serious threat than a force of nature. Then there’s Otsmane-Elhaou’s lettering that feels like a natural extension of everything they highlight. Shanharra’s word balloons reflect the suit’s color, and its mechanical nature contrasts with humans whose words turn red in moments of intense emotion. Then there are the hand-drawn wordmarks for certain situations; the fire and monster are so notable that they culminate in a major development between Aric, Shanharra, and Troy. No specific spoilers but Shanharra’s blue word balloons turning red suggests she will be able to connect with Aric a little more emotionally.

X-O Manowar #3 Gets The Attention It Deserves

X-O Manowar continues to be a title that serves as some of the best Valiant Entertainment offers. This issue highlights the strengths in a one-issue story by staying on point in not just themes and art; it’s practically a meta-commentary on its concept. Because once everyone is on board and helping each other out, they create an experience where the reader wants more.

X-O Manowar #3 dives straight into the difficulties of compromises in a well written one issue story that makes clever usage of foreshadowing in plot outline.X-O MANOWAR #3: The Compromising Compromises