A Surprise Twist in WONDER WOMAN COME BACK TO ME #4

WONDER WOMAN COME BACK TO ME #4, out this Wednesday from DC Comics, brings us back to a strange world in which Diana has found herself trapped. The dramatic revelation in this one is set to make any comic book fan proud.

Once again, this is just a friendly reminder that Wonder Woman Come Back to Me has been published once before, in Justice League Giants. That being said, this collection is perfect for anybody that has missed an issue or two. Or all of it, for that matter.

Like the previous few issues, Wonder Woman Come Back to Me #4 is split into two parts. However, this issue’s break was almost unnoticeable, seamlessly flowing from one segment into the next. The only reason the transition is even noticeable is thanks to the change in artists.

The tale of this strange place continues, but it would seem that we’re finally due for some answers. So far, we’ve seen Diana and her friends thrown through a portal (found by the Bermuda Triangle, naturally), face off against giant mammals, fight dinosaurs and insects, and come across aliens and allies alike. To say it has been a busy few hours for them would be the understatement of the year. 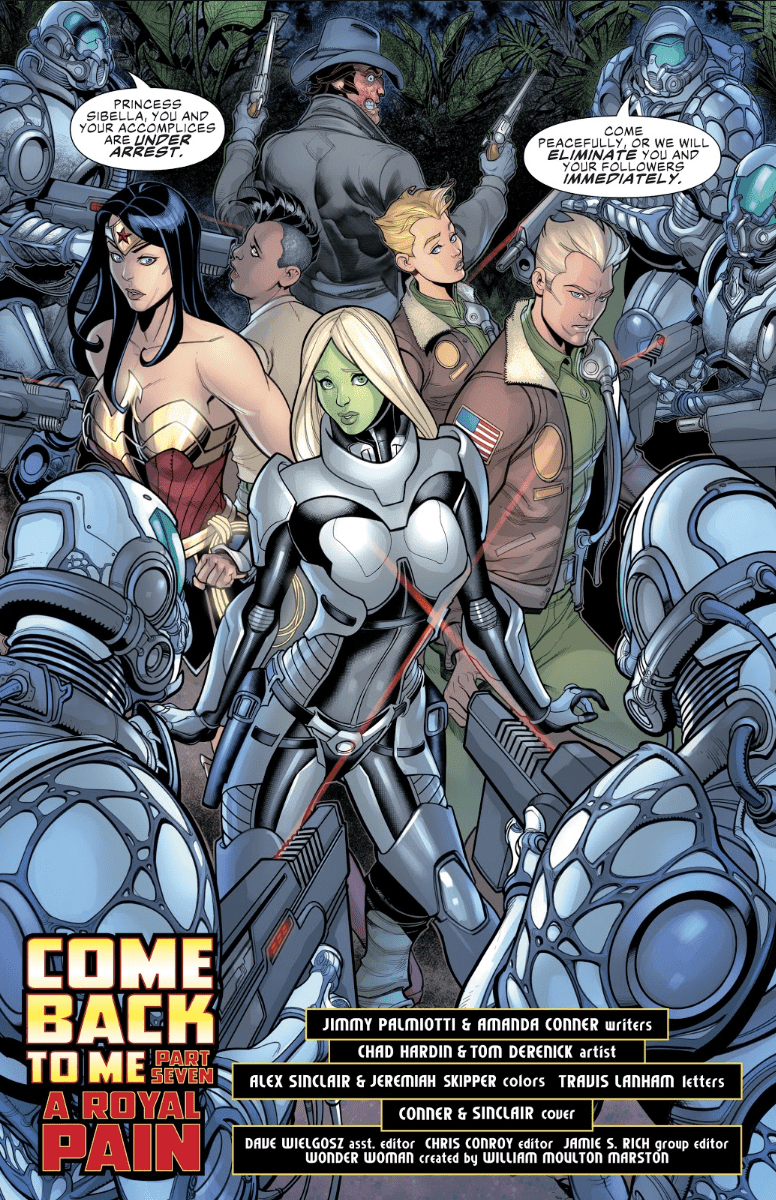 Jimmy Palmiotti and Amanda Conner return to write the fourth issue in this series, and it is extremely satisfying to see Wonder Woman start to work out what is truly going on here. There are still dozens of questions to be answered, of course. But it felt good seeing some forward movement in regards to solving the mystery.

There is an awful lot that happens in this issue. In fact, there’s even a change of scenery that occurs, hard as that might be to believe. Granted, the change only raises more questions. But that’s about par for the course with this tale.

The theory Diana came up with actually goes a long way in explaining the pacing for the entirety of the series up until this point. Meaning that it seemed like there was always something new coming up against our band of allies – and it usually wasn’t friendly. 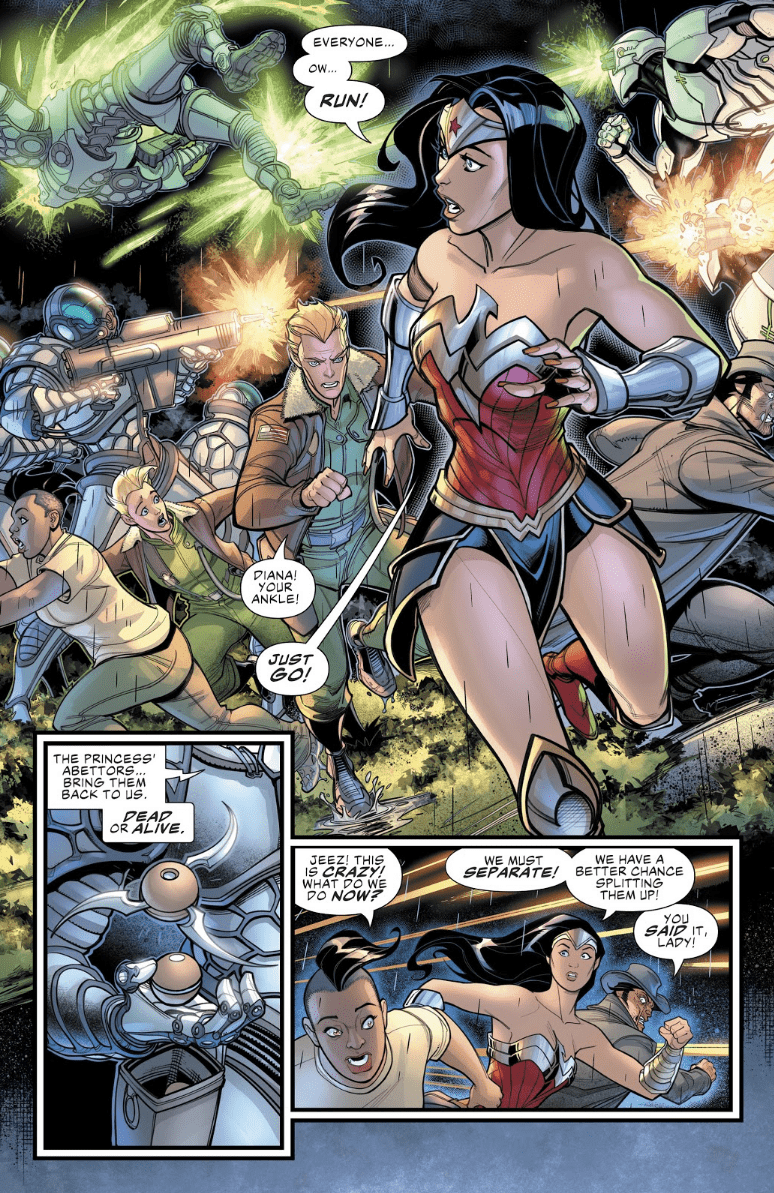 Running under the assumption that her theory is correct, we can only assume that the next issue will be spent explaining how this all happened – and what Diana and her friends can do to get out of it. And hopefully, we’ll get to see Steve kick some butt and get revenge while we’re at it.

As per usual, there was a large artistic team working on Wonder Woman Come Back to Me #4. Since the issue was split into two, that means that the artistic team swapped out for each segment. Chard Hardin (pencils and inks) and Alex Sinclair (colors) worked in the first half. And Tom Derenick (pencils and inks) and Jeremiah Skipper (colors) did the second half. Meanwhile, Travis Lanham was the letterer for both segments.

Perhaps the most jarring part of this issue was the sudden transition in art styles. A fact that might not have been so flagrant, had the same scene not been depicted back to back. Even the angles were nearly identical, yet the characters portrayed changed quite dramatically. If you’re not being careful, it might seem like a significant amount of time has passed between one panel and the next. 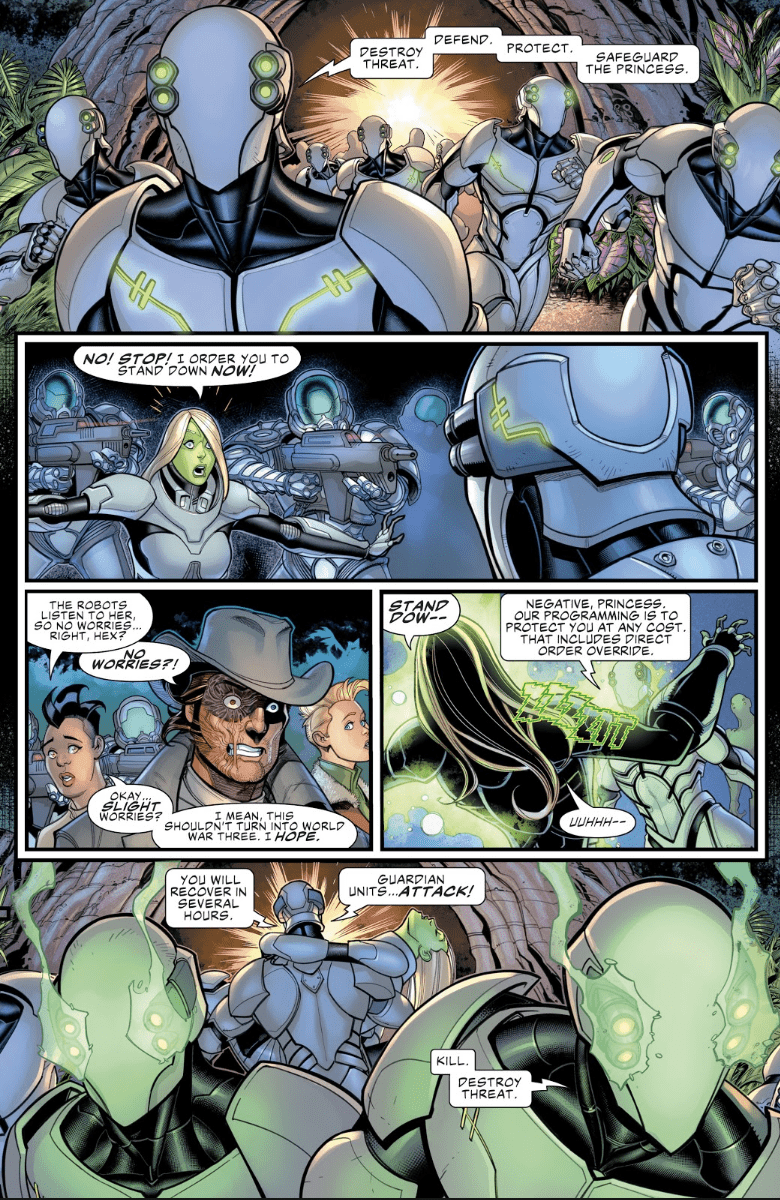 The artists in this issue did an excellent job of portraying the strange and weird events that constantly cropped up. And believe us, there was plenty of that. The expressions between the two halves change significantly, with one style leaning more towards a delicate side, and the other half going for strong determination.

Wonder Woman Come Back to Me #4 was perhaps the most satisfying issue in the series, if for no other reason than to finally give us some answers for what is happening. Though there’s no doubt that seeing Wonder Woman and Steve pummel those behind this whole mess will be even more gratifying.

Wonder Woman Come Back to Me #4 is satisfying in that it finally is giving us answers to what is happening. While the artwork transition in this issue was somewhat jarring, it was overall quite good. A Surprise Twist in WONDER WOMAN COME BACK TO ME #4