Horror is one of the most versatile genres in all of fiction. From slashers to psychological thrillers, and from creature features to supernatural terrors, its umbrella of subjects reaches far and wide. This is why it’s also such a subjective medium. The opinions and tastes of horror fans differ more from person to person than arguably any other genre. This is why Cullen Bunn and Tyler Crook’s Harrow County is such a rare treat. It’s an astonishing feat of storytelling that a horror story is able to hold such mass appeal while still maintaining genuine storytelling integrity. Bunn’s implementation of the southern rural setting and backwoods horror combined with heartfelt character-work makes the series a joy to read. This, along with Tyler Crook’s engrossing watercolors and charming detail makes Harrow County one of the most easily recommendable comic series of the past decade. 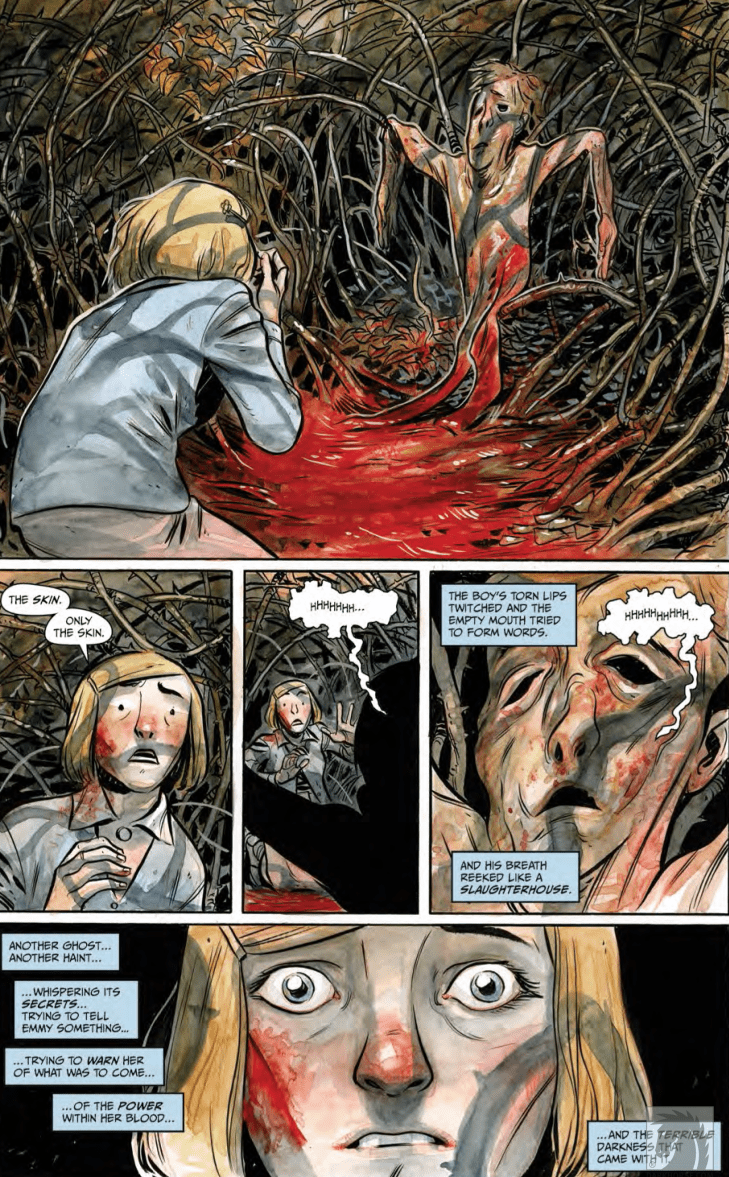 Emmy Crawford had always known that her quiet home of Harrow County had its share of strange secrets. The whispers of haints in the woods and old magics at work had kept her curious, but she never quite knew how close she was to all of this mystery. That is, just before her eighteenth birthday. Now with her understanding of who she is and how powerful she can become, it is her job to defend Harrow’s residents both human and haint from the dark magics that arrive in their quaint abode.

The humanity of Cullen Bunn‘s cast in Harrow is difficult to come across in any medium. There’s a sincerity in the convictions of the main characters that makes them instantly relatable, regardless if they’re human or not. Emmy is one of the most endearing protagonists of recent memory, a character with an almost inexhaustible amount of kindness coupled with a deep internal struggle. Watching her wrestle with the characteristics her kind-hearted father instilled within her and the immense power her bloodline gives her is always riveting. Her victories are earned in the eyes of the reader, and her sacrifices are understood and emotionally compelling. 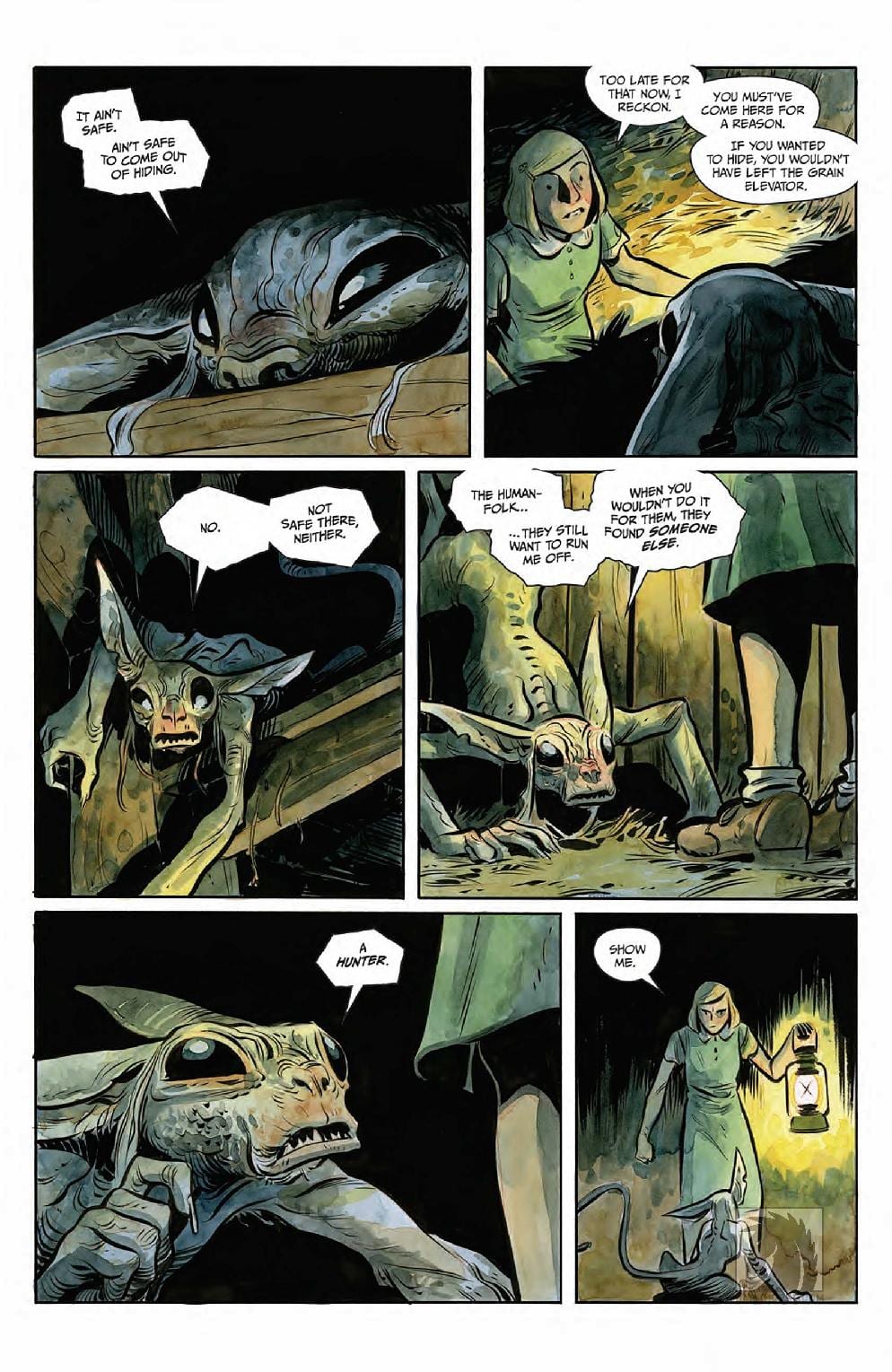 The supporting cast is also given great care in its development. Emmy’s closest friend Hattie has to struggle with her own teaching and superstitions about the “evils” of magic. The path the takes is an at times frustrating but always understandable one. The haints of Harrow County are sure to be favorites as well, from the tiny but courageous hobgoblin Priscilla to the massive and menacing, um, bull(?) in the woods (no spoilers). Even Emmy’s ever-loyal familiar the skinless boy, who never says a word, is a character that is sure to endear himself to any reader who embarks on this series. Even many of the series’ supporting antagonists have understandable views within their own treachery. The story deals with differing shades of good and bad, with Hester Beck as the representation of ultimate evil.

Another winning mark for Harrow is the development of its world and rules within its fiction. Harrow County itself appears frozen in time, with it being separated from the outside world just via isolation. This allows the quiet and charming yet haunting atmosphere to build freely. This is coupled with Cullen Bunn’s soft approach to lore and magic in the series. He doesn’t waste any time detracting from the natural progression of the plot by delving into the hard rules of Emmy’s magical abilities. Nor does he spend any time really explaining the hows and whys of Harrow’s hauntings and haints. They just “are.” The only real explanations the reader receives are ones that are necessary for understanding the characters themselves. Points such as backstories and revelations are brought in via conversation when the time is right. Even these small points of exposition are created in a naturalistic way that doesn’t detract from the story’s pace. This maintains the sense of wonder and engrossment in this neatly crafted horror-fantasy. 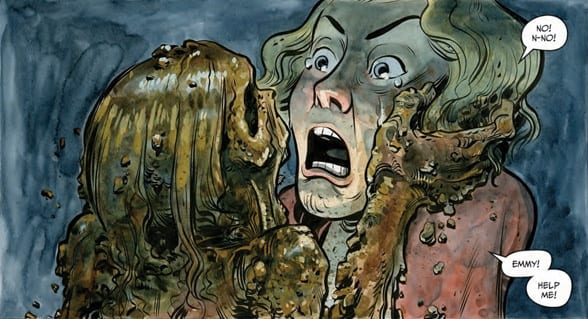 It is unlikely Harrow County would have either the reader reception or impeccable atmosphere it does without the iconic visual work of Tyler Crook. The mixture of quiet and quaint southern-woods and the eerieness of that same environment is captured in an art style unique to the Harrow co-creator. Crook’s watercolored textures fill the world with a softness that is warm and inviting in the sweeter moments but turns surprisingly sinister during the horror sequences. The linework is a neat mixture of excellent character design and that aforementioned mixture of “sweet & sinister” environments. As much thought as Cullen Bunn put into the cast in terms of personality, Crook put just as much in how to make them visibly relatable. Emmy is drawn to be every bit as kind and endearing as could be imagined.

The emotional range Crook demonstrates in his art with her alone of astounding. From happiness that radiates off the panel to rage or heartbreak, Crook is there to provide some of the most human art in the medium. This goes for every character, from the unusual haints to the shady lodge of witches and the terrifying Hester Beck. Crook’s range of talent comes in extra handy during the story’s creepiest and most harrowing moments. The horror in Harrow County doesn’t rely on jumps or gore, but purely on atmosphere. Crook makes this work with his murky darkness and unsettling woodland landscapes. When blood does pour however, it’s always a brutal and shocking display without ever feeling gross or over the top. Even the lettering has its own personality, often changing fonts or appearing in wavy sing-song lines. Crook’s creativity further encapsulates the wonder and charm of this series. 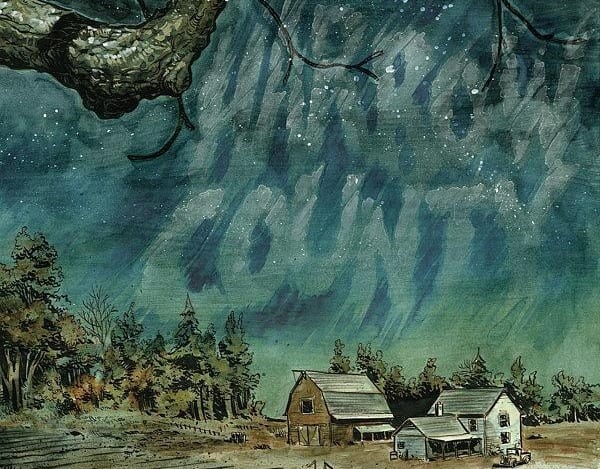 Cullen Bunn and Tyler Crook’s Harrow County is one of the most easily recommendable and widely enjoyable comics of the decade. The effortless mixture of fantasy and horror with character-focused storytelling makes for an endlessly compelling read. Bunn’s carefully constructed and original plot is gripping from the opening page of issue one to the final page of issue 32. Tyler Crook’s art and lettering wraps the reader in its dense atmosphere and fantastic design. With a new sequel-series just having started, now is the perfect time to grab the first volume of this spellbinding comic.