Why MARVEL KNIGHTS: PUNISHER Has Stood The Test Of Time

Punisher by Garth Ennis and Steve Dillon is getting a new collection this week to celebrate Marvel Knights’ 20th anniversary, so let’s discuss what made the series so seminal.

Marvel Knights Punisher: The Complete Collection Volume 1 collects Punisher (2000) #1-12, Punisher (2001) #1-5, and Punisher Kills the Marvel Universe. The collection is mostly by Ennis and Dillon, with inks by Knights co-founder Jimmy Palmiotti, colors by Chris Sotomayor, letters by Wes Abbott, and covers by Tim Bradstreet. Doug Braithwaite penciled PKTMU with a team of inkers and Shannon Blanchard and Tom Smith on colors.

The first twelve issues revolve around Frank Castle’s return to New York City and his quest to take down one of the top crime families. The following five issues, although renumbered, continue this story and follow Frank as he tries to take down an international terrorist. 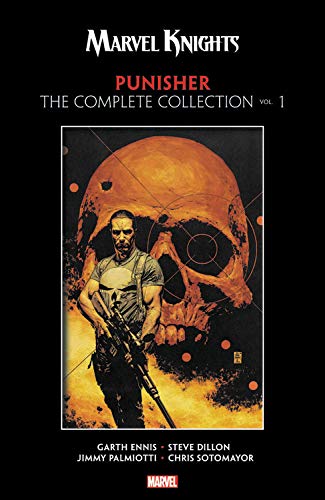 Ask any comics fan, “Where should I start reading the Punisher?” and 9 out of 10 times you’re going to hear “Garth Ennis and Steve Dillon.” This run has become so infamous and iconic that most everything you’ve seen and heard of the character has probably come from it. But why? Why has this run become the definitive run for Marvel’s (arguably) most controversial character?

Well, first off, it’s incredibly entertaining. As Ennis discusses in his “Defense of the Punisher” (available in the back of this collection):

“That’s what I’m going for with this series, folks. Entertainment. Plain and simple. Not a complex analysis of the causes of crime, not a portrait of one man’s tragic descent into murderous psychosis, not an in-depth examination of the vigilante down the ages. Not the recipe for Coca-Cola either, come to that. Just a laugh, a thrill and plenty of sustained automatic weapons fire for your buck.”

Ennis and Dillon just focus on having the most fun they can with Frank Castle, and they succeed. Their run is not a celebration or an endorsement of his actions. It’s simply entertainment for adults who know that murder is obviously not the answer to our world’s problems.

And “fun” might sound like a strange word to use in regards to the Punisher, but that’s what makes this series so entertaining. It’s total over-the-top fun that crosses over into surreal and absurd. The Punisher punches a polar bear in one issue. Ennis and Dillon never take themselves too seriously, and the dark comedy in both the writing and the art sets this run apart from any other Punisher series.

Dillon was the authority on simple, effective artwork. He showed you exactly what you needed to see, and his facial expressions told a story all on their own. Open this volume to any page and just look at the art – don’t read a single word. You’ll know exactly what’s going on. That’s how strong Dillon was at telling a story through his work. He could make you laugh and give you chills with just a static image (sometimes both at the same time). If you’re looking for a master class in visual storytelling, look no further than Dillon’s Punisher.

Plus, Tim Bradstreet’s covers are probably the Punisher images you’ve seen most often in the past 18 years. If you even have a passing interest in the character, you definitely know them. They’re forever burned into comic book history, and each one sets the tone for the dark, gritty story you’re about to read.

Now, although Ennis wanted to focus on entertaining instead of exploring the complexities of Frank Castle’s pscyhe, there’s still a little bit of the latter in this run. Part of what makes the first 12 issue series so appealing is this background story of three new vigilantes that pop up in New York. The Punisher doesn’t meet these fellas until the very end of issue 12, so for most of the series, we’ll just randomly see these three murdering people in cold blood for their various reasons. It’s clearly a commentary on violence begetting more violence, and the possible influence of characters like Frank Castle on already unstable individuals. This is a great addition to the story in itself, but the real kicker comes at the end in how Frank deals with this “Vigilante Squad.” It’ll leave you wondering about how the antihero actually views himself, and his true thoughts about his crusade.

Which brings us to the final thing that makes this Punisher run so enduring: its supporting cast. In addition to Punisher and the Vigilante Squad, Ennis and Dillon build their story around characters like Detective Soap and Frank’s neighbors Mr. Bumpo, Spacker Dave, and Joan the Mouse. By giving these side characters larger roles, Ennis and Dillon not only flesh out the world, but they give the reader characters that they can connect with. You really can’t relate to Frank Castle; you’re not supposed to. But you can relate to the people who are affected by the violence that surrounds Frank. These characters give the story sympathy; they establish the emotional connection with the audience. They also allow Frank to show his more human side, adding another layer to his character. Punisher stories are about over-the-top violence and destruction, but that can only carry a story so far. These side characters provide the story with the heart that it needs to become a perennial favorite.

So why are comics fans still recommending Marvel Knights Punisher as the gateway into Frank Castle? Because when you combine Garth Ennis’ absurd writing, Steve Dillon and Jimmy Palmiotti’s masterful art, Wes Abbot’s raw lettering, Tim Bradstreet’s iconic covers, and more, you get a uniquely entertaining story that’s different from any series that’s come before it or that’s come since.

Why MARVEL KNIGHTS: PUNISHER Has Stood The Test Of TimeMarvel Knights: Punisher is the definitive Frank Castle story for fans new or old. Definitely pick up the new Marvel Knights 20th Anniversary collection, especially if you've never read it before.