To say that Tom King’s Heroes in Crisis take on Wally West was controversial is an understatement. Speaking to CBR last month, King had this to say about the character:

“We took this character that I love — my first introduction to DC Comics was Wally West. He’s my favorite Flash, and he’s really the Peter Parker of the DCU. He’s our every man. And for over ten years he’s not had his own book and has been at the periphery of things. Basically, since before the New 52, he’s been gone. This story puts Wally back at the center of the DC Universe, where he belongs.”

Now, the former Kid Flash is about to embark on a mission to “find redemption” in the new series Flash Forward by writer Scott Lobdell and artists Brett Booth and Norm Rapmund. 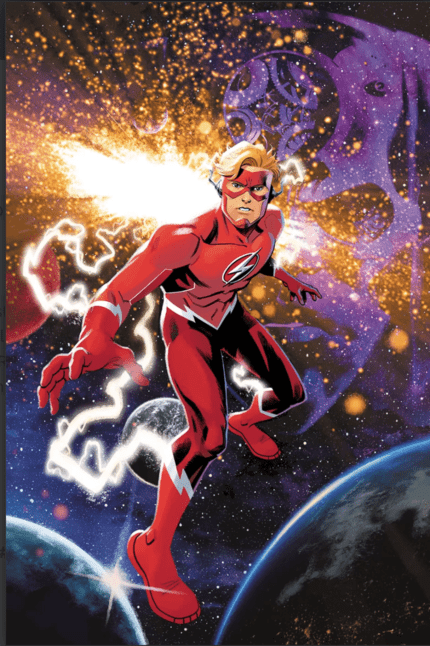 FLASH FORWARD #1
written by SCOTT LOBDELL
art by BRETT BOOTH and NORM RAPMUND
cover by EVAN “DOC” SHANER
variant cover by INHYUK LEE
blank variant cover
His name is Wally West—and he was the Fastest Man Alive. That is, until the Multiverse was rewritten without him or his family in it. Wally returned and tried to make it work, but the damage was done. Spinning out of the events of HEROES IN CRISIS, follow the man who called himself Flash on an adventure to find redemption in a cosmos that has fought so hard to destroy him.
ON SALE 09.18.19
$3.99 US | 1 OF 6 | 32 PAGES
FC | RATED T+

Note the “T+” rating, which implies this likely won’t have the lighthearted tone of Wally’s earliest adventures.

What did you think of Wally’s portrayal in Heroes in Crisis? Will you be picking up Flash Forward? Let us know in the comments!