"It’s not for me to say, but it might be my finest work. If it is my best comic, it’s because it’s built squarely on the shoulders of the giants of comics."

Tom Scioli’s Fantastic Four: Grand Design is one of Marvel Comics’ most exciting projects of 2019 (check out our review of issue one). In it, Scioli writes, pencils, inks, colors and letters an adaptation of the entire Lee/Kirby Fantastic Four run. Next Wednesday sees the release of Fantastic Four: Grand Design #2, the second and final issue. With that in mind, we at Monkeys Fighting Robots reached out to Tom and asked him a few questions about the book, his approach and the possibility of more Godland comics.

Monkeys Fighting Robots: Tom, Fantastic Four: Grand Design, is finally out. Can you tell us how this project came into fruition?
Tom Scioli: Ed Piskor created the whole Grand Design concept with his X-Men. They were looking to follow it up with other creators of a similar stripe. Chris Robinson the editor contacted me about potentially doing a Fantastic Four one and what that would look like. What issues would I want to cover.

MFR: As a Jack Kirby fanatic, what was your emotional spectrum while working on this book?
Tom Scioli: First I had to get over the initial jitters of interpreting one of the great works of my favorite cartoonist. It was like staring into the heart of the sun. Once I got comfortable with the task, it was so much fun. When I’d get to some of my favorite parts, it was pure bliss. The first time I got to draw Black Bolt, I was having the time of my life and it only got better as Silver Surfer and Galactus showed up.

MFR: What’s your process like? Like what’s a typical workday for you? How do you schedule your time for a project that will take so much of your time?
Tom Scioli: I’ve gotten to the point where it takes 1 day per page, start to finish. My record is 4 pages in a day, everything but color. I just did that last night.

MFR: Did you have a favorite FF moment you wanted to do in particular?
Tom Scioli: Doctor Doom stealing the Baxter Building. The arrival of the Silver Surfer and Galactus. Doctor Doom stealing the Surfer’s board. I wasn’t really looking forward to the later parts of the Kirby/Lee run, but I ended up having a lot of fun with Franklin Richards’s nanny Agatha Harkness.

MFR: You had to cram over 100 issues of storytelling into two books. What was the hardest part of doing this?
Tom Scioli: The subtractive part, having to make the hard decisions of “there’s just no room for this.”

MFR: Did you see anything new or different in those original Lee/Kirby books while you were working on FF:GD?
Tom Scioli: I got a new appreciation for the early, early issues. The surface was sometimes crude in those pre-Sinnott issues, but it still had that epic sci-fi feel, it was just a little more under the surface.

MFR: How long did it take you to create FF: Grand Design, from start to finish?Tom Scioli: 9 months. It’s my baby.

MFR: X-Men: Grand Design was the first ‘Grand Design project. Did Marvel give you any parameters to work with because of X-Men: Grand Design? Did it influence your approach in any way?
Tom Scioli: The one parameter is that they wanted a sense of roughly what issues I was going to cover. It’s focused around the Kirby era, but I was grabbing things from all over the place: 70s, 80s, 90s to today. 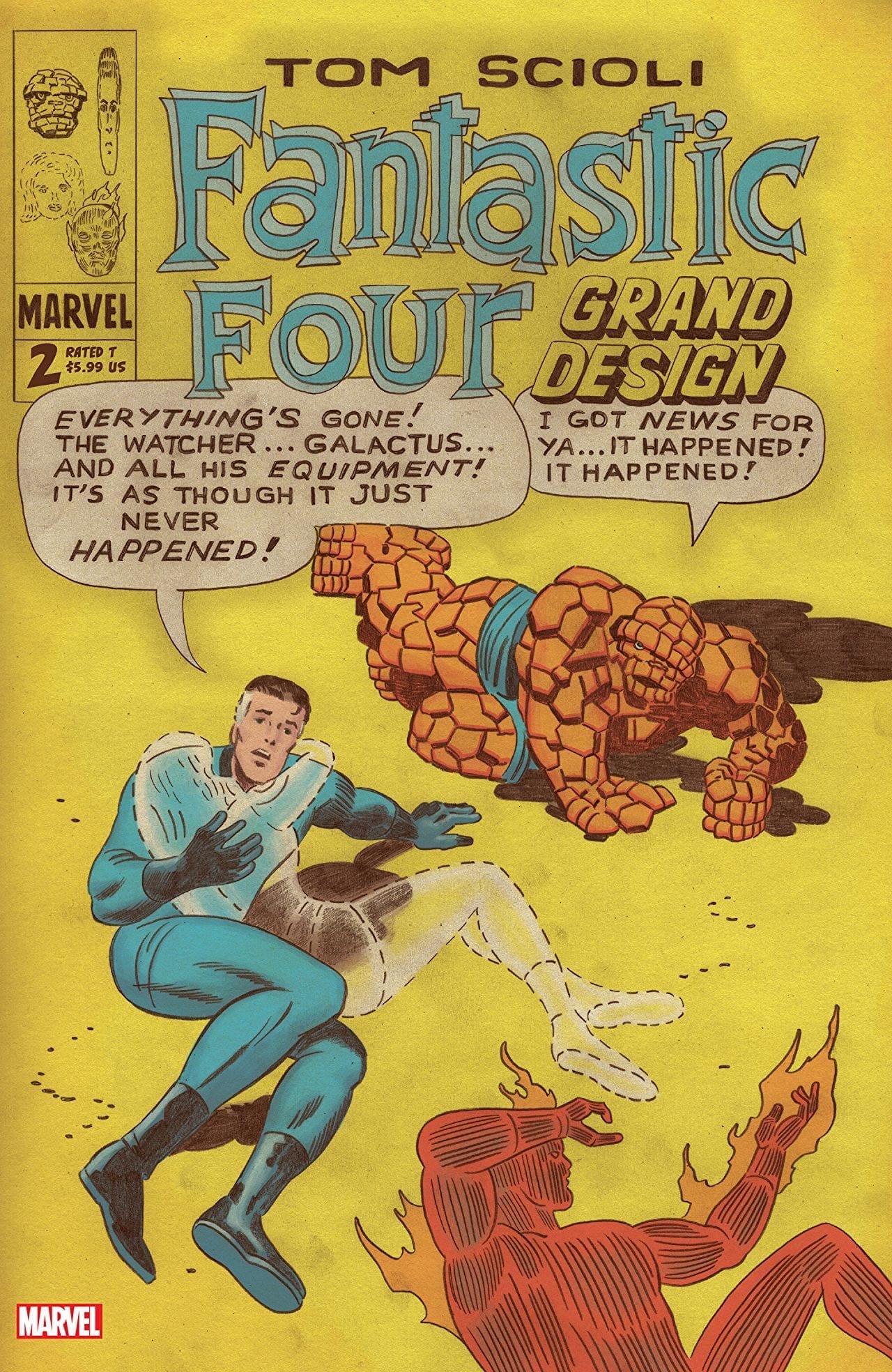 MFR: What other comics (or media for that matter) influenced Fantastic Four: Grand Design?
Tom Scioli: Movies, documentaries, Forrest Gump, games. Any incarnation of Fantastic Four: the cartoons and movies. And then the various other Marvel comics where bits and pieces might appear.

MFR: What’s your final feeling on FF: Grand Design now that you have finished it?Tom Scioli: I love it! It’s not for me to say, but it might be my finest work. If it is my best comic, it’s because it’s built squarely on the shoulders of the giants of comics.

MFR: Are there any current comics you are stoked on and reading?
Tom Scioli: I always enjoy Marvel’s Star Wars comics. I think everybody who works on them are such massive fans that they bring their A-game to it. Olympia is a new series from Image that I enjoyed. I stay up to date with Hama’s G.I. Joe and I recommend it highly as a comic that’s become brick by brick a life’s work for the author.

MFR: Gotta ask…any chance of more Godland comics in the future? Love that series!
Tom Scioli: You know, just the other day I had an idea for a new Godland story. I’ve done more Godland comics than anything else so I felt like I was done with it, but enough time has passed that I’m feeling like maybe there something more I can do there.

MFR: Is there going to be a Marvel Treasury Edition of Fantastic Four: Grand Design?
Tom Scioli: I don’t see why not.

MFR: Are you currently working on something you want to talk about?
Tom Scioli: Yes, but I think the publisher wants to wait to announce it.

MFR: Any final words for our readers?
Tom Scioli: Fantastic Four: Grand Design is in stores the day before Thanksgiving. Thanks for all the support and enthusiasm! I think you’ll be surprised and delighted by the finale.

Fantastic Four: Grand Design #2 is out on November 27, 2019, and is available at your local comic shop.