The Mask: The Renewing Face of Outrage Culture

The Mask, after twenty years, is back in comics and people’s minds. Unlike the Jim Carrey movie, which plays up the comedy factor, the comics tend to fall into cultural outrage. Even the initial title Masque was starting to become very political with commentary on the Vietnam war; so much so original creator Mike Richardson had to make it stop. Unfortunately for Richardson, after a while, political commentary seems too good to pass up. With today’s political climate, is it any wonder I Pledge Allegiance to the Mask comes out? Even then, what is the mask supposed to be if not outrage? Minor spoilers ahead!

Richardson might not be big into politics, but he doesn’t want his idea to go away either. The concept is, what would happen if people remove their inner inhibitions with the power to do whatever they want? That concept allows a revamp with a new design by Chris Warner. Series writer John Arcudi develops a story around the titular mask and how whoever has it wreaks havoc. Starting with the neurotic Stanley Ipkiss and his life in a bad town (Edge City), it shows how tragic the character’s fall is.

Stan starts sympathetic since he doesn’t have much to live for except his girlfriend, Kathy. The mask itself begins as a gift to Kathy, one that Kathy reveals is just a way of making up with her. Unfortunately, when Stan wears the mask and removes his inhibitions as Big Head, he slowly shows he’s another product of his environment. Stan becomes verbally abusive to Kathy and becomes addicted to the power of Big Head. Kathy later wears the mask to remove her inhibitions toward Stan and kill him. Does this mean the mask makes everyone evil? No, Arcudi reveals in later stories that this isn’t the case.

The Mask’s real power is to remove people’s limitations, physical or mental. Meaning that rather than let reality or feelings get in the way, Big Head allows people to cut loose. People are products of his or her environment, and depending on their settings, there are forces out of their control. When circumstances allow some unsavory people to flourish while others did nothing wrong, these others want to lash out. In the second half of the original run, police lieutenant Mitch Kellaway has some of these problems.

With mafias and drug dealers getting free thanks to a corrupt district attorney, Kellaway is up against a wall by his captain. The use of the mask allows Kellaway to work outside the law. Because it looks like the FBI wasn’t cracking down mobs in his city. Unfortunately, when the outrage threatens the people closest to you, there will be problems. Kellaway almost kills his only friend in the force (Lionel) but resists Big Head’s temptations. This ends up being a common theme in series runs after Arcudi.

Most runs after Arcudi follow the same formula of people who were oppressed by powerfully corrupt people. The Mask allowed the wearer to go on sprees that are intended to help the people closest to them. Because who doesn’t fantasize about raging against your worst enemy? When things get out of control, it’s the wearer’s ties to their loved ones that keep them from going insane. By this point, The Mask is mostly seen in small appearances or crossovers like with the Joker. To get on Richardson’s nerves, we can guess that the reason for this hiatus is due to people’s focus outside the US. After 9/11, people out of the borders seem to take more precedent than inside. That is until people start to outrage over political ideologies post-2016.

Return of the Mask… Through Politics

It looks like nobody’s going to get over how ugly the 2016 election was; when two presidential candidates prove to be untrustworthy, outrage sparks. Appearing in time for the 2020 elections, Big Head decides to parody power against the court of public opinion. The Big Head candidate (Abner) uses the persona’s infamy as a platform to get himself across. Not unlike how President Donald Trump uses controversy as a financially friendly means to spread his campaigns. Nobody even seems to care if the candidate could be an insane murderer. 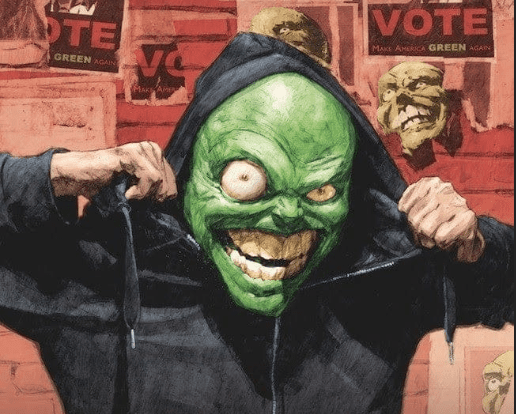 At the same time, Big Head doesn’t merely (and literally) kill his competition, he reveals their shady backing. Even Kathy, now Edge City’s mayor and presidential candidate is threatened by her backers. Naturally, it’s not enough to reveal people’s ulterior motives but to encourage the public to act more like him. Because when things aren’t going people’s way, the only thing they really listen to is their outrage. It’s no secret that movements like Three Percenters and Antifa rise in reaction to the presidential elections. Their policies for direct action over legal proceedings perfectly encapsulates The Mask’s goal to cause chaos. You can’t call this a comeback for Big Head, however, the outrage was always there.

People always have something to rage over; some people just know how to hold it in better. It’s just a matter of time before that tension explodes. As long as there is outrage in one form or another, there too will be a Big Head. That is the reason Death Battle hosts Wiz and Boomstick sick the Mask on Deadpool.

What do you all think? Is the Mask an embodiment for outrage, or are we just leaving targets for apolitical readers? Leave your thoughts in the comments.