Review: THE MASK: I PLEDGE ALLEGIANCE TO THE MASK #2 Presents America At Its Worst

I PLEDGE ALLEGIANCE TO THE MASK #2, available in comic book stores Wednesday, November 20th, gets more political than ever—with just a touch of blood. Mayor Kathy Matthews continues to push her campaign for the presidency despite a alarming number of murders among the candidates. Many speculate that a new person assuming The Mask persona is behind the killings; what’s peculiar is that they’re currently running for president as well. No one knows who this late-comer is, but it seems a large segment of the public have taken to his message—a message that embodies America at its worst.

The drama all starts when The Mask, dressed as Uncle Sam, pays a visit to Orville Willicker, leader of The Columbia Party and player in the current race. Willicker believes him to be nothing more than one of his aides and plays along with number of personal indictments. But the fun ends when The Mask proceeds to murder the man in cold blood. 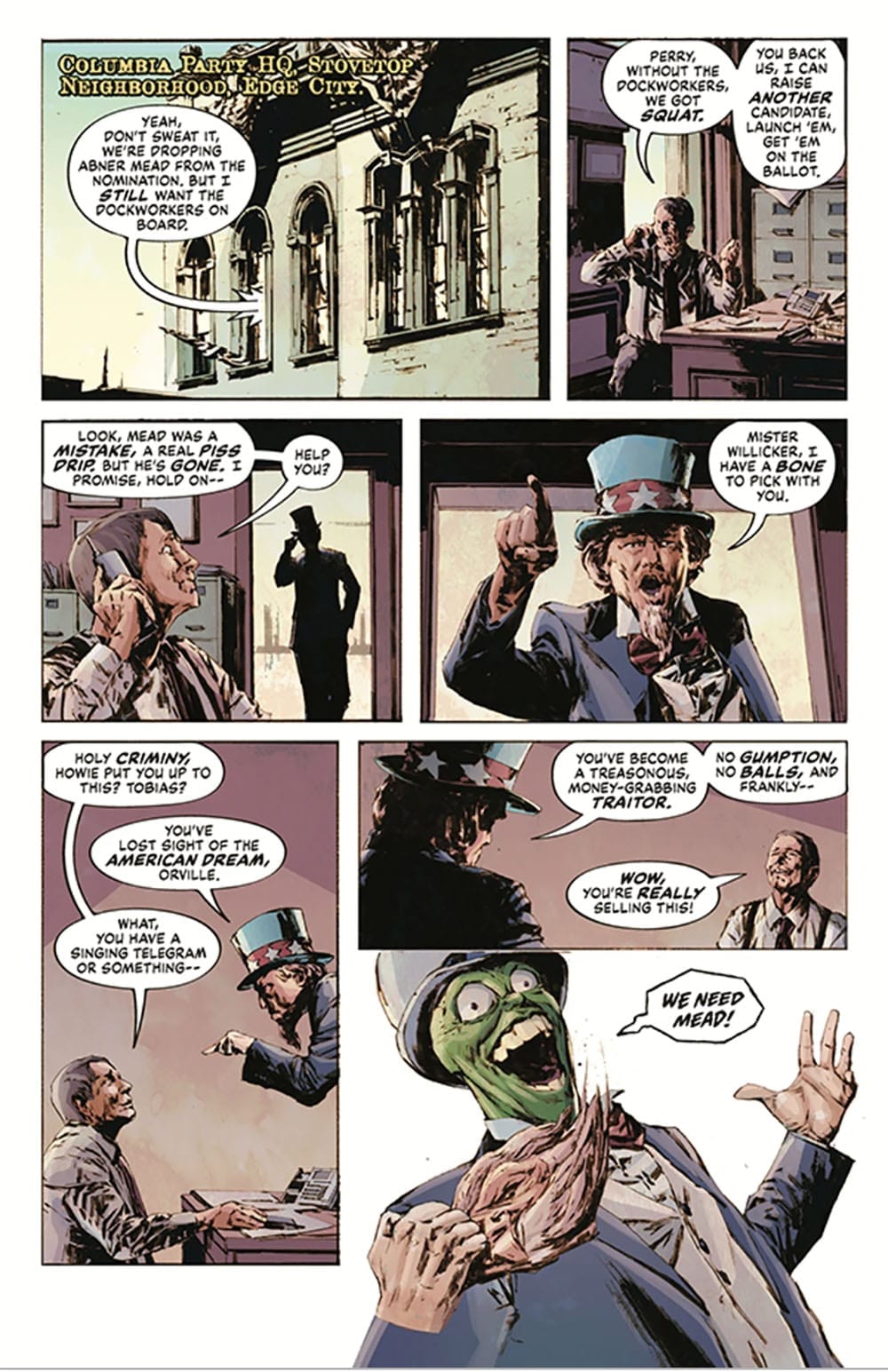 Following this horrific event, The Mask murders three other presidential candidates in quick succession, leaving the political landscape even more chaotic than before. Despite this atmosphere, Kathy remains committed to her campaign, though she does spend her free time sparring with boxing instructors to keep her physically and mentally sharp. However, The Mask wastes no time setting his sights on her, planting his agents at one of her public speeches and orders him to lob a bomb at her podium.

Fortunately, Kathy survives, and decides to beef up her security, enlisting long-time Mask chaser Detective Mitch Kellaway into her personal entourage. Though they’ve butted heads over the yeas, the duo know how to hold their own against The Mask.

Writer Christopher Cantwell adds a neat twist to this story by letting The Mask run for president. Outlandish as it seems, the vigilante’s own campaign promises of wealth and guns hits a disturbing cord in its similarities to America’s modern politics. Can Kathy find a way to stop the megalomaniac before he takes her life, wins the election, or both?

Patric Reynolds penciling and inking, along with Lee Loughridge’s coloring, provides a grungy and gritty vibe for the Edge City setting—a perfect fit for this story. The back alley meet-ups, the police chases—scenes employing dark shades and bold lines—give us just enough clarity while keeping much hidden in the darkness. The only brightness we see comes in the form of The Mask’s outlandish costumes and unforgettable green face. Nate Piekos of Blambot’s lettering reinforces this by using jagged borders on much of The Mask’s dialogue balloons—quite literally adding “edges” to this chaotic being who represents the degeneracy of Edge City itself.

Reynolds and Loughridge lend their expertise to the main cover, depicting “Big Head” in all his glory in the presidential seat at the White House—the worst nightmare for some and a dream come true for others. The burning U.S. capital behind him adds to the chaos this candidate wishes unleash.

James Harren’s artwork places Javier Antanasio, the mask user from issue #1, front and center, gazing ahead with a crooked smile while tormented faces of The Mask. This shows the many personalities that have worn the mask and the tormented existences they lead.

The twisted tale told in I PLEDGE ALLEGIANCE TO THE MASK #2 is uncannily relatable in its scope, seeking to draw in mature, politically savvy comic book fans. Readers will undoubtedly be on the edge of their seats watching the Edge City “hero” take the country into his own hands.

Do you think The Mask has a shot at winning the election? Let us know in the comments below!