Review: THE FLASH #80 Sees Threats On Multiple Fronts and Suffers from it

The Flash faces Death through a Familiar Foe!

The Black Flash is hunting the Force Avatars. Ever since the Strength, Sage, and Still Forces entered the prime earth reality, the Speed Force has been slowly dying. It sends Black Flash to eliminate the other Forces to save it. Barry was unable to save Psych of the Sage Force but was able to save Fuerza and Steadfast. While Fuerza goes into hiding with Commander Cold, Zoom reappears and takes Steadfast. He had taken the powers from the other forces to become more powerful than any speedster before him. What could the mad speedster want with the avatar of the Still Force? 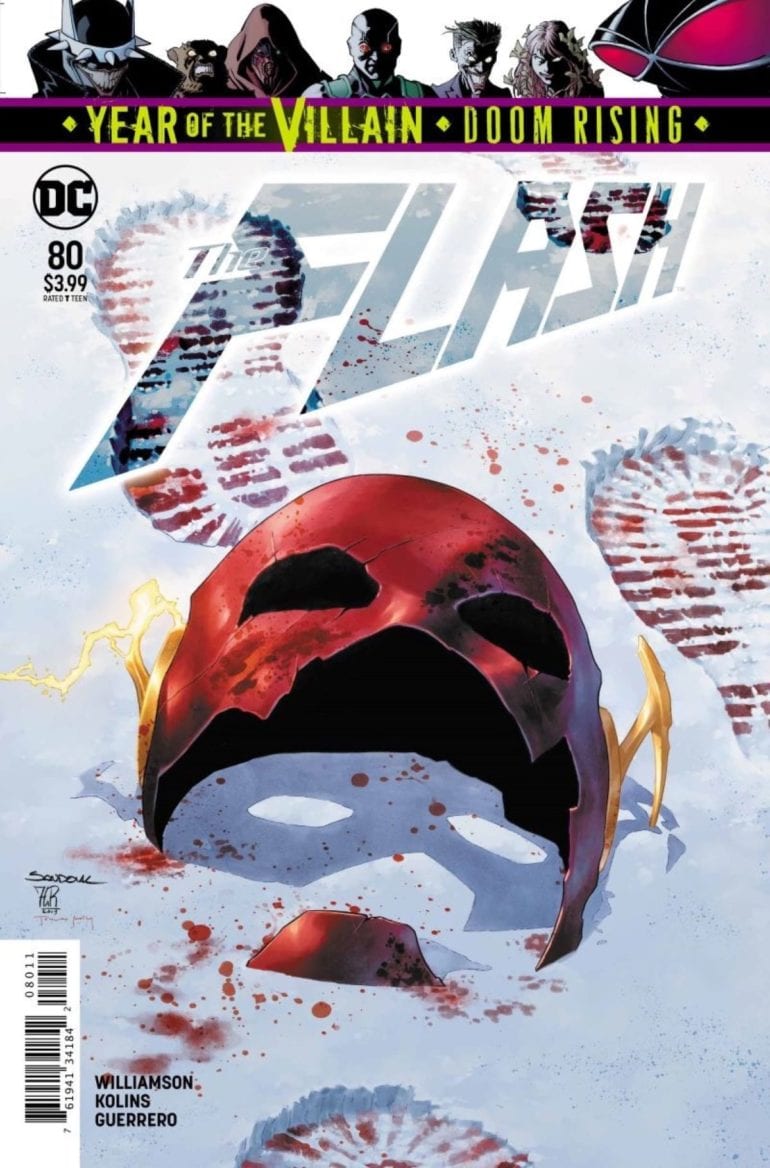 We open with a one-sided battle between Black Flash and Barry. Once the speedster of death had thrown our Scarlet Speedster around, he warns him to stay out of the way. Barry and Iris reconvene and begin trying to piece together where exactly Zoom went. Barry explains the history of Hunter Zolomon to Iris, telling her his tale of how one fatal mistake caused him to spiral down the path to become the Supervillain we know him as today. Meanwhile, Wallace and Avery have found the location of the new Rogues. Just as they are ready to take them down, however, the pair witness them swearing to take over with their new gear. 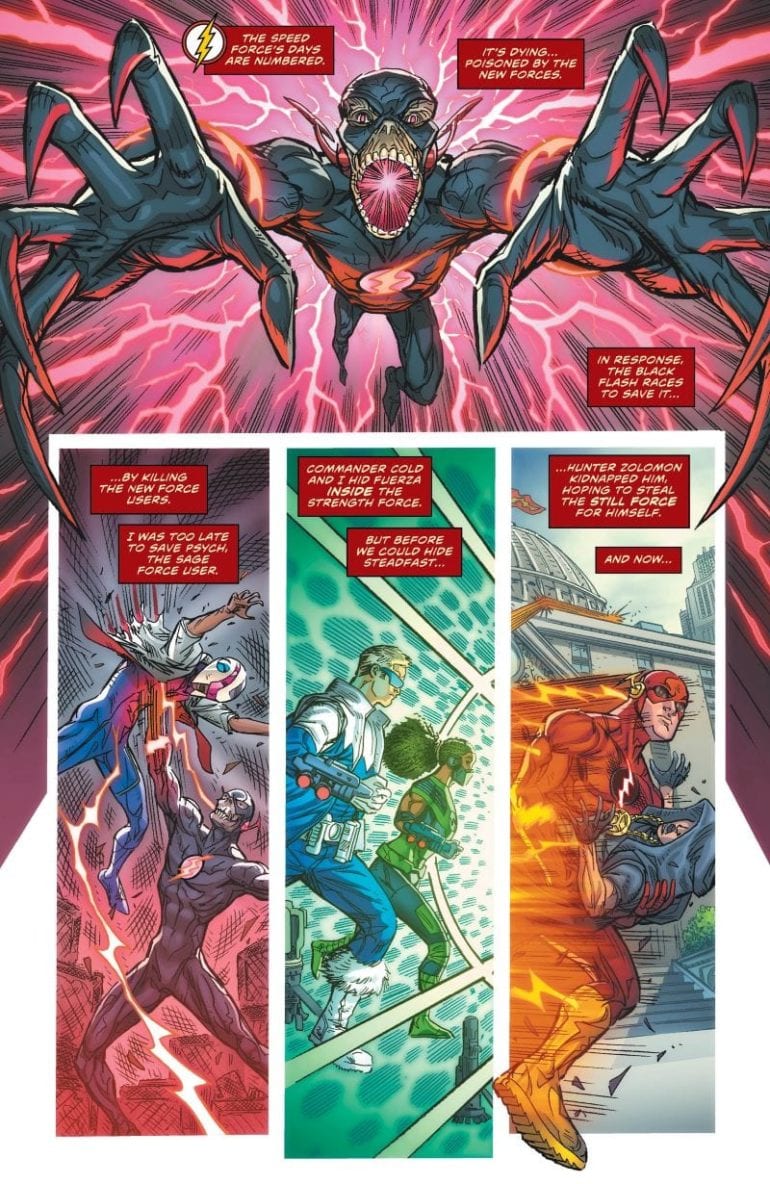 This issue has officially changed hands in terms of villain and their goal, and it was almost a smooth transition. The biggest problem I end up asking about is why we didn’t just start with Zoom’s return. Zoom had always been a looming threat, but he should have been given his own storyline. The Black Flash story was already getting sidelined by the Year of the Villain Rogues story, and Zoom pushes him out the rest of the way. I understand this was going to try and be a big shocking twist, but it just feels forced.

That being said, Zoom’s master plan is actually surprisingly interesting now. He explains that instead of trying to beat Barry, he would use his powers he gained from the other Forces to face off against the Black Flash. Considering how he noted that death had been apart of his life at every turn, he had to take down death itself. 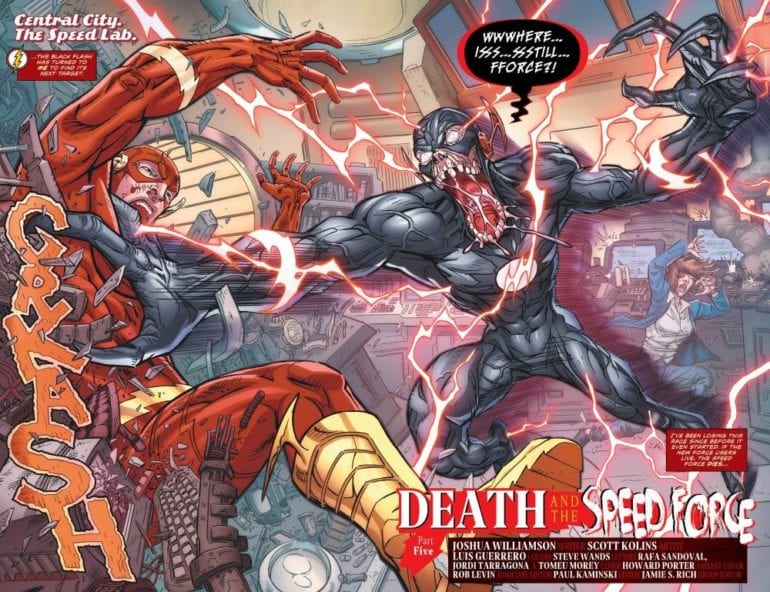 We sadly don’t get Rafa Sandoval’s art style this time around. Instead, we get the return of Scott Kolins, and I am honestly disappointed. I’ve never been the biggest fan of this style. While Rafa Sandoval’s style was more slick, Kolins goes for an edgier style with sharper lines. It causes some of our heroes to feel flat or look completely ridiculous. One example of this is Iris’ hair, as it always stands up as if there was static in the air.

There are a few designs that actually stand out and benefit from Kolins’ style. The Rogues and Black Flash look menacing in his style, especially in the two-page spread of the Death Speedster tearing through Barry. Luis Guerrero helps out as well with expert colorwork, causing every character to pop off the page. This style would be perfect for a Halloween story, but not this one.

Overall, this issue was a bit of a letdown. While initially excited for the return of the Black Flash, the Year of the Villain and Zoom’s return has completely sidetracked it. Kolins’ style isn’t doing the story many favors either but has a few moments where it shines. There is certainly potential here, but the creative team really needs to knock it out of the park with the conclusion.

As the plot races towards its conclusion, the large assortment of Flash villains muddies it despite a few glimpses of intrigue.Review: THE FLASH #80 Sees Threats On Multiple Fronts and Suffers from it