The Boys is creator Garth Ennis’ gigantic middle finger to mainstream comics and its reliance on superheroes. With supes all but dominating the big screen and many smaller ones, it was only natural for an adaptation of The Boys to appear. However, with the changes come the need to make scenarios more compelling, distilled, and sensational. That last part is what makes the overall themes of either series so divisive. Below is the research from the gutters. Spoilers ahead for both series. 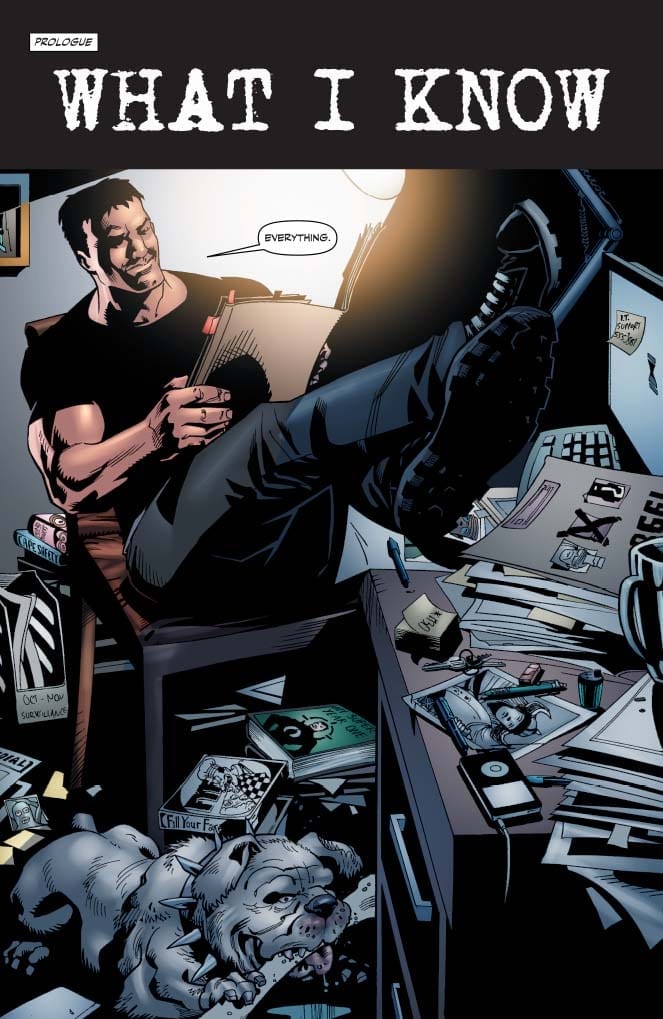 In either series, a team of somewhat ordinary people wages an espionage style war against superheroes. The team’s newest recruit Wee Hughie gets drawn into the conflict after his girlfriend is accidentally killed by Flash pastiche A-Train. The superheroes have the backing of the megacorporation, Vought, to be both above the law and indulge hedonistic lifestyles. A-Train’s team, The Seven, also get a recruit in Annie January (Starlight). After a hazing, she encounters Hughie and begins a relationship with him. Meanwhile, both teams’ leaders Billy Butcher and Superman pastiche the Homelander engage in a personal war over the memory of Butcher’s wife.

The comic, however, presents a very different story in comparison to the show. As such, the themes that Ennis wanted to convey seem to clash at certain points. Where does one series succeed, and where does the other fail?

Integral Setting of The Boys

In the Amazon show, The Boys are a thrown-together group of vigilantes who have, in some way, been wronged by Vought. Utilizing whatever connections they have, the team wages war against the Seven. Unfortunately, without any backing or formal training, the Boys are easily overwhelmed. A good number of their wins are accomplished by plans made by the seat of their pants. In effect, the show presents a thrilling departure from the comic book.

In the comic series, The Boys are a black ops team with official backing from the CIA. With years of experience under their belt, they’re able to give Hughie better time to adjust. They also avoid unnecessary fights whenever possible. Unlike what most spy franchises like James Bond would display, the point of being a spy is to gather information and sabotage. In essence, the comics reveal a world that believes in the necessary means of keeping superheroes under control — especially one that makes 9/11 look even worse through a botched plane rescue.

Character Motivations in The Boys

Ennis’ main strengths lie in emotional realism, giving the audience a reason to care about or follow his characters. While half of The Boys’ comics involve making mainstream superheroes look like tools, the better parts of the series come from meaningful character interaction. The Amazon show also goes out of its way to utilize those emotional interactions but in more sensational methods. In a way, however, this betrays the point of the comic.

Hughie, for example, is portrayed as an avenger who slowly becomes a side-kick of Butcher. Everything from the death of his girlfriend Robin to his relationship with Annie becomes a means to an end for him. While the audience still supports him for his quick thinking and plans, Hughie becomes less sympathetic under Butcher’s influence.

This is in contrast to the comics version of Hughie, who never wanted revenge. The only reason he is even in the Boys is that Butcher manipulated him. Despite every horrible situation, Hughie never got used to the violence and horrors. In the end, Hughie retains his innocence with more maturity. Even Butcher admits that’s what makes him admirable.

On a side note, Comic Hughie’s appearance was based on Simon Pegg. The actor, in turn, plays Hugh Campbell Sr., TV Hughie’s dad. Strangely, this is the comic Hughie trying to tell his counterpart not to lose himself, which is what makes TV Hughie’s descent much worse.

Annie, much like Hughie, goes through a couple of changes in the Amazon show. Most of them are in reference and reaction to social movements. For example, at the “Believe Expo,” Annie uses the opportunity to tell everyone about her sexual hazing. She is also portrayed as less dependent on outside forces even before breaking off with Hughie. In effect, she takes over comic Hughie’s role.

Annie, in the comics meanwhile, doesn’t have much portrayal outside of her appearances as Starlight. The only time she can be herself is with Hughie, especially after everything in her life turns upside down. But even Hughie lets Annie down a couple of times. He didn’t use her to spy on the Seven like TV Hughie, but he did snap at Annie after seeing the footage of her hazing. So Annie goes on an unseen journey of self-reflection where she becomes more independent. While she and Hughie get back together, it’s on their respective merits. Merits that drive home the overall message of the series.

The Themes of The Boys

The Boys’ central theme is the perspective of heroes. Superheroes are undoubtedly fun to look at, but behind the scenes, they are just as messy as regular people. This includes being lazy and entitled after having their needs covered. Giving supes celebrity all but gives them an excuse to be statically flawed as long as it makes their corporate overlords money.

On the other hand, violent anti-heroes like the Boys are not viable either. Traumas haunt characters like Butcher and act on their bloodlust on targets they deem necessary. In other words, they’re psychopaths, bigots, or just plain insane. Unlike supes who tend to still have a choice in what they do; these people are driven by their nature and thus have little self-control.

So what makes a hero? Not tragedy, the comic series displays that this is just a gimmick. Starlight was to be given a very revealing costume as part of a grim and gritty persona as a former rape victim. However, she refuses, after nearly being raped by A-Train before this but not becoming darker. Anyone who does fit this mold is (again) likely insane. Ennis’ central message is that real heroes are the people who serve and take personal responsibility. This is something the Amazon series fails to show.

Sensationalism Is Nothing But a Gimmick

Aside from the changes in characters, the Amazon show makes the plot more similar to an action movie. The use of explosives and guns bring this home. The world is so bleak in comparison to the comic; it almost feels like a parody. Vought International, for example, is an all-around evil corporation, unlike Vought-American, where it just does whatever works. Why? Because conspiracies like on the show are a waste of resources! Then there comes what little action there is in the comic. 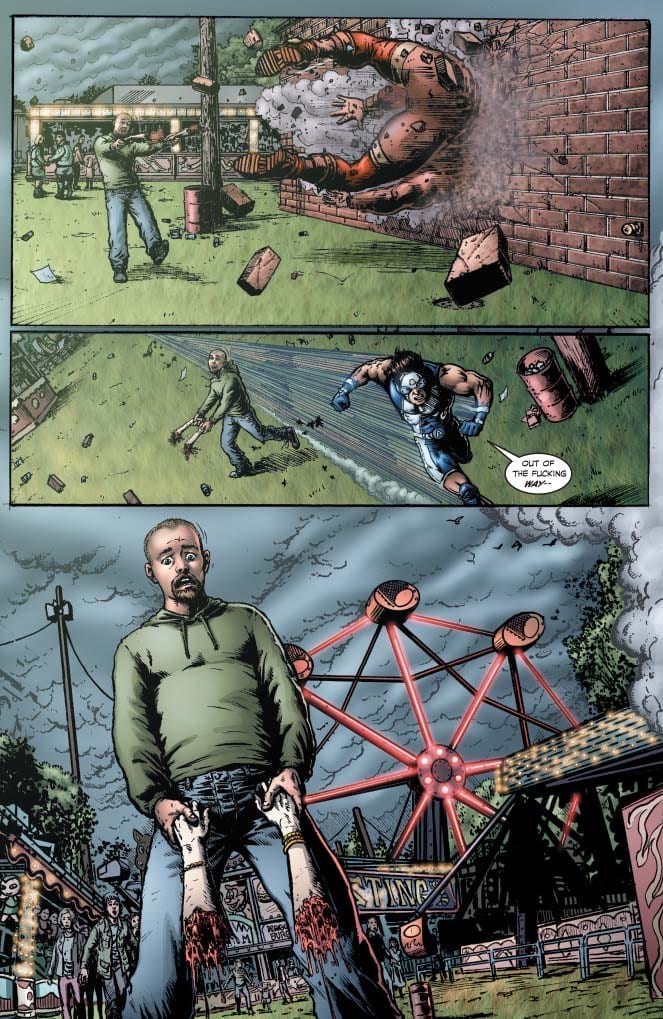 The comic’s opening conflict with Teenage Kix, for example, is the most action the comic gets on-screen. It’s an act to send a message both in series and for the reader to get an idea of what the cast faces. Hughie, in particular, is scared and overwhelmed when he accidentally kills one hero. But that’s the point, fights are ugly, and it’s best to avoid them whenever possible. Any time violence does occur; it’s usually from a distance, out-of-view, or en-media res. That’s the ideal way of using sensationalism, unlike the show where violence occurs every other period to keep audiences engaged.

As such, Amazon delivers a ham-fisted narrative down the audience’s throat. io9 journalist Charles Pulliam-Moore even calls this hypocritical on Amazon’s part. But does that mean the comic is better?

Both of The Boys Have Faults

The comic has its fair share of flaws. For one, most of the supes in the comic feel like caricatures, with only a few of them getting fleshed out. Most of the time, whenever supes do appear, it’s to mock the major comic companies. So, the series drags by a little in the middle arcs like with the G-Men. The show, however, makes the supes look more human while mocking celebrity lifestyles. Aside from the Seven, D-list supes need income but only get recognition from past exploits. But this is arguably the only vast improvement the show has over the comic.

The show’s main flaw is that instead of deconstructing the two sides, it just makes the Boys look like caricatures in season 1 — the themes of knowing when to stop and walk away feel wasted here.

What do you think of the first season of THE BOYS? Leave your comments below.