In the 1990’s, Dark Horse’s licensed Aliens comics were in full creative swing. The publisher allowed creators to give their own unique and varied takes on the iconic sci-fi/horror series. From tongue-in-cheek action parody, to the claustrophobic horror of the original film, Dark Horse’s Aliens covered all-manner of styles and approaches – admittedly, with mixed results. One story that stuck out was David Lloyd’s Aliens: Glass Corridor. The V for Vendetta artist creates an intense space-thriller and morality play that utilizes the comics medium to its absolute fullest. With a simplistic yet compelling script, moody, atmospheric visuals, and tension-fraught sequential direction, this one-shot is an overlooked gem from the height of Dark Horse’s time with the Aliens license.

“Frank is a hired killer with a problem. His conscience has caught up with him and now he’s running from himself and his past. In his effort to escape, he encounters a band of stowaways who may provide him with the means for his redemption. When the freighter they are traveling on is threatened by an Alien, it appears that Frank is their only hope for survival.” 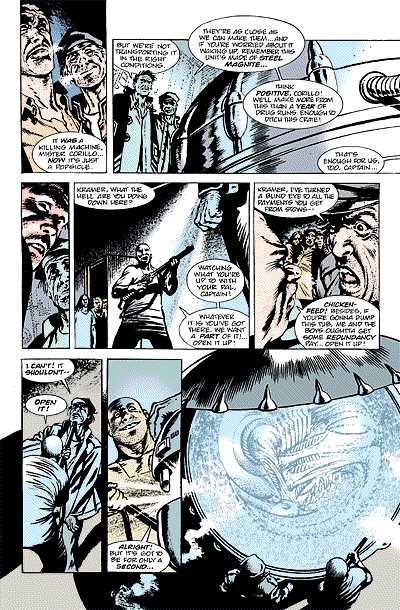 Lloyd’s story with Aliens: Glass Corridor starts off with an assassination going wrong. Frank, a hired gun, has a crisis of morality during a job and needs to hide from both witnesses and his employers. While on the lam he finds his way aboard a passenger ship that just so happens to have a payload of destitute stowaways – and a xenomorph on its way to the highest bidder. Naturally, things go awry and the beast gets loose on the ship, free to hunt down and slaughter the craft’s passengers. Now, Frank finds himself in a position to redeem himself for his past deeds by defending this group of poor refugees from the galaxy’s perfect killing machine. Imagine if Richard Stark’s Parker were a contract killer instead of just a thief, and he were stuck on a ship with an Alien, and that’s about what Frank’s characterization is like. Seeing this group of refugees – one with a newborn baby – triggers a sense of nobility in him; even if that nobility is just a byproduct of guilt.

Much of Lloyd’s work here lies in the unspoken. Like any great cartoonist, he uses his sequential direction and the actual visuals to do the deeper storytelling. Frank’s demeanor is captured in how he looks at people, and how he silently reacts to situations. There’s a page not long after Frank gets aboard the cargo ship where he sees the young woman with a child and focuses in on her. Lloyd structures the sequence with a block of small panels that cut back and forth between Frank and the young woman. He closes up on Frank, and even though there is no dialogue, we can see the gears turning as he weighs his past against this girl’s life – and the possibility of being the only thing standing between her and a brutal end. Frank’s solo fight against the iconic monster feels like one of atonement, running through the labyrinthine corridors of a cargo ship in hopes of sparing innocents after a lifetime of paid cruelty. David Lloyd’s thick lines and dense inks give the figures and setting a sense of deep dimension. His choice of color is exceptionally unique – every image is filled with a mottled single tone, filled with the dust and grime of a used future. The low light and shadow is perfect for the tone of this comic, and easily makes Glass Corridor one of – if not the – coolest looking Aliens comics from the Dark Horse era. 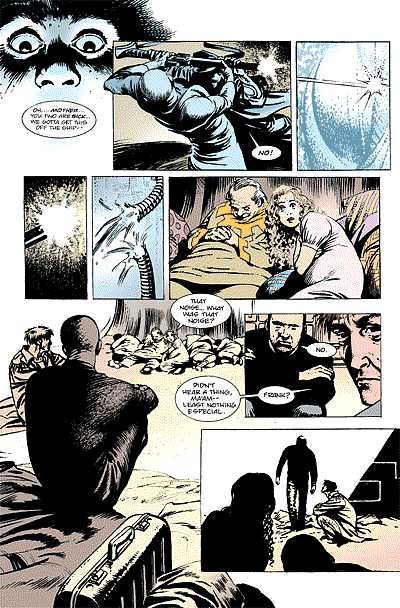 David Lloyd’s Aliens: Glass Corridor is a hidden gem of licensed comics storytelling. Lloyd’s protagonist here in Frank the hired killer is a deceptively complex protagonist with a rather simple inner conflict – which then manifests in his decision to deal with the Alien. The V for Vendetta artist uses his understanding of the comics medium to create a dark, contemplative, and intense horror one-shot with an unforgettable visual aesthetic. Aliens: Glass Corridor is one of the best stories from Dark Horse’s publishing history with the iconic franchise.