Review: SUPERMAN’S PAL JIMMY OLSEN #1 is a weird yet intriguing start to the series

The Life and Times of Jimmy Olsen!

Almost every comic book character has a human sidekick. Batman has Alfred, Wonder Woman has Etta Candy, and Superman has the most famous sidekick of all, Jimmy Olsen. The young redhead has been appearing in Superman media since 1940 and has become one of his most iconic staples.

The reason for this iconic status is still up for debate. While Alfred and Etta are a big help to each of their respective heroes, Jimmy is more of a nuisance than anything. Each new story for the paper ends up getting him into trouble or transform him into a super being for a little while. With how much Superman saves him, I’m shocked no one puts him under the damsel in distress category. Maybe there is a hero underneath the bumbling, and this series by Matt Fraction is going to show it. How could this possibly go wrong? 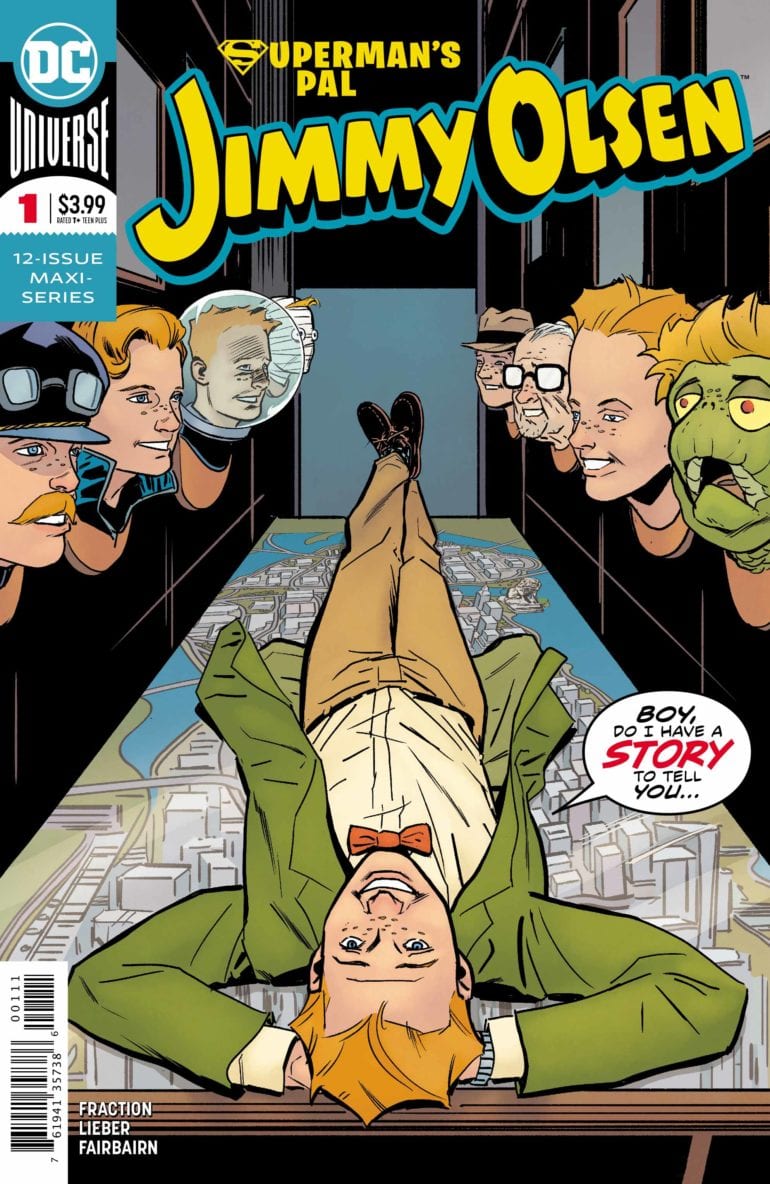 We open our story with a history lesson of Metropolis. While the Luthors have made a significant impact on the city, there was one family that had been thorns in their side for centuries: The Olsens. Since it started as New Oberstad, the Olsens are said to be one of the original Metropolis families and refuse to give in to a Luthor. Even Jimmy’s brother, Julian, constantly butts heads with Lex over cases in the city. Jimmy, however, continues to be the bumbling fool of the family, with his most recent stunt for press involving a space jump and a turtle man serum. The whole thing causes create mass hysteria and cause damage fees to skyrocket for the Daily Planet. 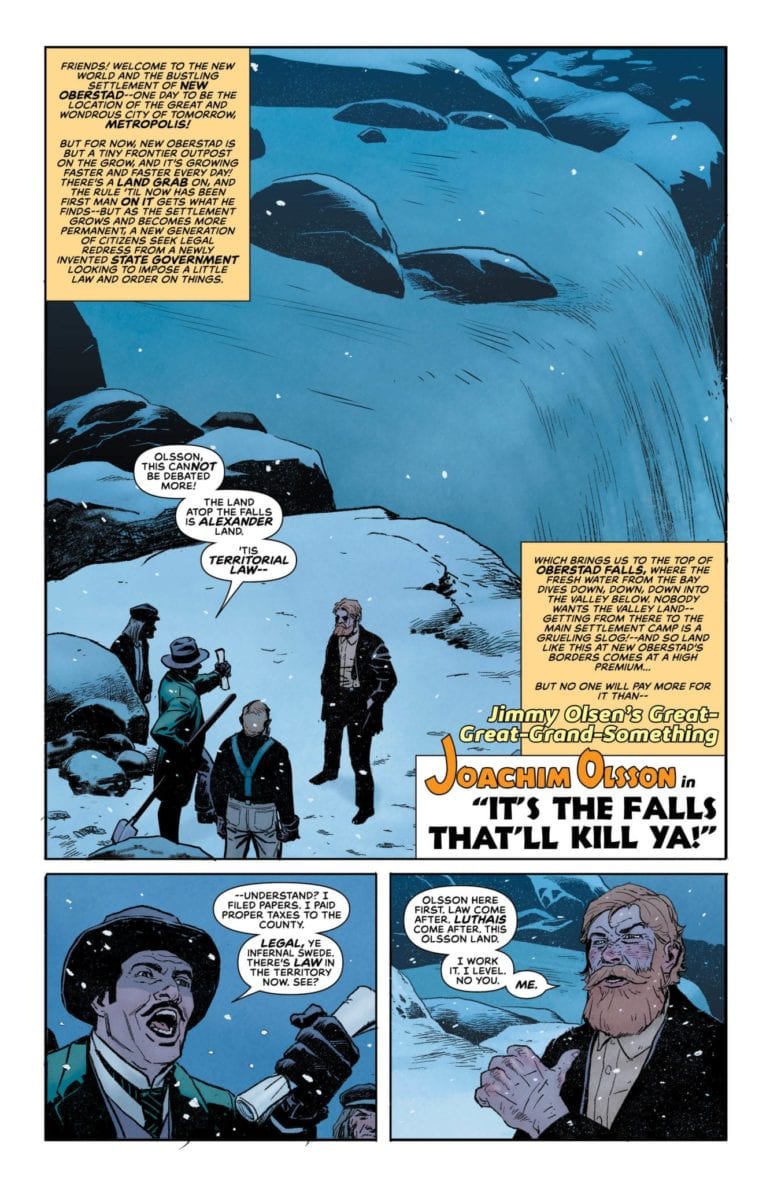 If it wasn’t made evident by the bizarre summary, this story is kind of all over the place. There isn’t much of a major narrative until the last page cliffhanger, which raises so many questions. Before that, however, we get a brief history of the Olsens and a reminder that Jimmy is a screw-up. While I do find the history of Olsens interesting, there is nothing new brought to our main character. There are a few little easter eggs of Jimmy’s past sprinkled in, including the several names he took whenever he got superpowers, but it isn’t enough to make the story interesting. It’s not bad, but the second issue has its work cut out for it.

The art for this issue is a bit of a mixed bag, at least for this reader. Steve Lieber is the illustrator, and his style has its high and low points. He tries to go for a realistic mixed with a cartoonish style, capturing the bizarreness of Jimmy’s life. Sometimes it works, mainly when focused on Olsen himself. Turtle Boy Jimmy looks incredible as well as his many misadventures retold by Perry White. 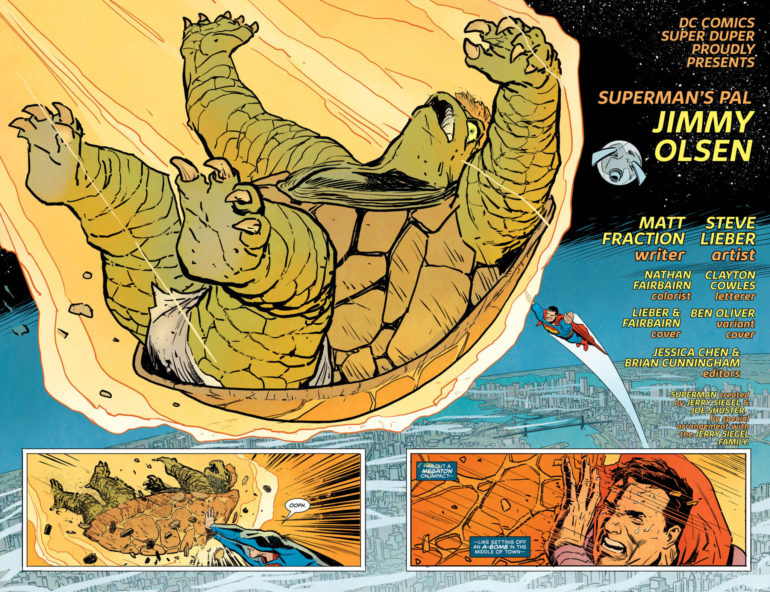 The editor for the Daily Planet is also an example of the downside of the art. Perry looks terrifying, almost monster-like. I understand that it is supposed to be exaggerated since Jimmy had caused another massive bill, but he’s also supposed to be one of the most human characters in the Superman mythos. Other examples of these hiccups are Joachim Olsson, and Lex Luthor looks more than happy to watch his family monument got destroyed. This art style might be suited for other readers, but not this reviewer.

Overall, this first outing of Jimmy Olsen was middling. While the story seems to be all over the place, it promises an adventure of strangeness with Superman’s best pal. While some of the art isn’t my cup of tea, there is potential to make this series look fantastic as well. It definitely has enough pull to bring a reader back in for the next issue, but the team has a lot of work to do if he wants to keep them.

Review: SUPERMAN'S PAL JIMMY OLSEN #1 is a weird yet intriguing start to the seriesWhile the first issue shows promise, this look into Jimmy Olsen's life is certainly a weird one.