Author Jason Inman explores the relationship between the American Armed Services and superhero comic books, and breaks down different comic book service members with the goal of deciding whether or not they are a “good soldier” by realistic, contemporary military standards.

Super Soldiers is out June 18th, and thanks to author Jason Inman, Monkeys Fighting Robots has an exclusive excerpt to share with you.

The book is an exploration of the correlations between the real-life American Armed Services and superhero comic books, and how the former influences the latter. Each chapter breaks down a different comic book service member – such as Captain America, Batwoman, and even Beetle Bailey – with the goal of deciding whether or not they are a “good soldier” by realistic, contemporary military standards. Inman also shares never-before-told stories about his time in the Army, deployed as a soldier in Iraq.

In addition to serving in the military, Inman has written the creator-owned comic book series Jupiter Jet, and has appeared on DC All-Access, Collider, Nerd Alert, and Screen Junkies. Super Soldiers is his first prose novel.

Pre-order Super Soldiers on Amazon by clicking here, and keep scrolling to read an exclusive excerpt from the chapter on Marvel’s War Machine. 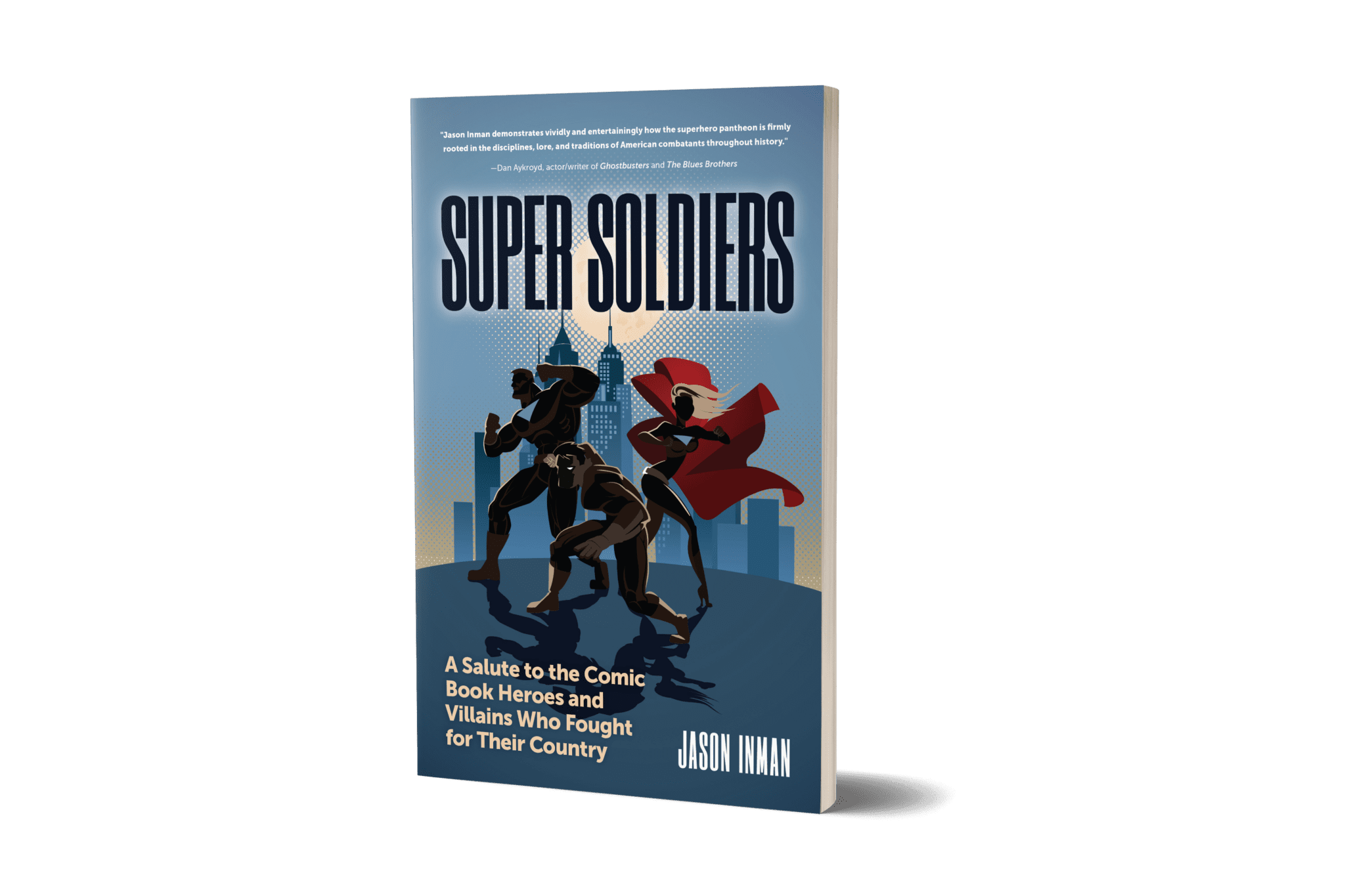 When Tony came across Rhodey in the steamy jungle, the billionaire philanthropist was clad in the very first Iron Man suit he ever designed. (We’ll not mention why Tony is also wearing a trench coat and hat on top of the armor. That subject could fill another three-hundred-page book.) Rhodey was desperately trying to fix his helicopter to get back in the air when the newly minted “Iron Man” loudly lumbered through the trees. Rhodey did what any decently trained airman would do—he pointed his M16 at the monstrosity and fired! When the bullets had no effect on the Iron Man, Rhodey remarked, “Oh mama, looks like I’ve stepped in the bad stuff this time.” Iron Man assured Rhodey he would not harm him, but he needed the batteries from Rhodey’s downed helicopter to recharge his suit. If he couldn’t get a boost soon, the suit would fail and Tony Stark’s heart would stop. (This was during the time in Tony Stark’s career when he still needed the Iron Man suit to survive.) The two men barely had a moment to consider their next moves when a Viet Cong patrol attacked their position. The two were forced to unite against a common enemy. There’s no quicker way to forge a bond than that! Iron Man saved Rhodey’s life, which ultimately convinced James Rhodes to allow Iron Man to drain his helicopter’s batteries. As a result, the helicopter was permanently down for the count. Not only that, but Rhodey’s leg had been injured during the surprise attack. Determined not to leave behind the brave soldier who had helped him, Iron Man carried Rhodey on foot until they reached the American perimeter and safety. After being released from the hospital, Tony Stark appeared to Rhodey and thanked him for helping his Iron Man reach safety; he then offered Rhodey a job after the hostilities in Vietnam ended.

(Readers’ note: Iron Man kept his real identity secret from Rhodey and made him believe Iron Man was Tony’s bodyguard. One can only imagine the conversations they must have had, jaunting through the jungle. “Hey, Iron Man, what movies do you like?” This was a ruse that Tony Stark perpetrated on several people in the comics over the years, not just Rhodey.)

This brief encounter proves Rhodey was ready to think outside the box. He wasn’t—and is not—limited to the rules and standard procedures of the Air Force. Rhodey is willing to critically think about the situation and use the available means to accomplish his goal. You don’t look a gift iron robot man in the mouth. After a series of other jobs, Rhodey left the military and finally accepted Stark’s offer. He became Tony’s personal pilot and aviation engineer.

Many people like to put service members in a box—typecasting them, if you will. If you join the Air Force, then the only career fields for you after your service are flying jumbo jets for airlines, or NASA. Rhodey took a job that was a little of both. If not for his acceptance of the strange, he would never have found himself working for a multibillionaire superhero, a job which would eventually lead him to his own true destiny: becoming a superhero.

When my time in the service was over, I considered many jobs connected to my old life. I had just come back from a year in Iraq, and many of the civilian contractors who staff bases in the combat zone are always looking for experienced former soldiers. Since you’ve already seen the combat theatre up close, you know exactly what to expect. There would be no surprises. (In retrospect, I can’t imagine any full civilian non-veteran who would accept a job in a combat zone. No job pays that well.) There is one employer whose pay is woefully poor—the US armed forces. Join any of the branches and, unless you quickly move up the ranks to captain or major, you’re going to find your paycheck lacking. Now, there are plenty of other benefits that sometimes make up the difference when you are serving, but not many. Our fighting men and women are severely underpaid for the job we expect them to do. Civilian contractors in a combat zone, on the other hand, are paid handsomely. I remember asking the civilian who managed our fuel base on Tallil Air Force Base (the post I was stationed at in Iraq) how much he made. He simply laughed and said, “It’ll make your head spin, kid.” It’s the only reason I ever considered going back to the dusty lands of the Middle East, because maybe, just maybe, the pay would make it worth my time. I obviously never made that choice, since I now sit here writing this book. However, this exact choice was made by James Rhodes, and I like to think his Stark paycheck was very handsome. It’s a choice I think many combat veterans would have also made.

Rhodey is also a character who values loyalty. Perhaps it was his many years serving in the Air Force, perhaps Rhodey always had a loyal bent, but this trait has come to define his relationship to Tony Stark. While many people in the world do not trust Tony, Rhodey always sticks by him. This essentially makes Tony his civilian battle buddy. That’s a term for when you are partnered to another soldier in combat; it’s your duty to look out for each other and ensure you both make it through the mission unscathed—no matter what. I believe this is Rhodey’s mechanism for coping with civilian life and the strangeness of working for (and later with) Tony Stark. Think about it: most days on the job at Stark Enterprises, the Living Laser or Spymaster will come crashing through your windows, then try to steal the newest technological invention built by your boss. Only by focusing on his loyalty to Tony, a person who gave him a shot—a friend who took a chance on him—can Rhodey deal with the insanity destined to occur in the same building as Iron Man’s exploits.

Super Soldiers is out June 18th; you can pre-order it on Amazon by clicking here. And keep it tuned to MFR for our review in the coming weeks.

See what others are saying about Super Soldiers:

“Jason Inman provides a manual which utilizes and analyzes subtext to offer psychological profiles of our favorite superheroes viewed in the context of their fictional experiences as warriors and veterans in the US Armed Forces. He demonstrates vividly and entertainingly how the superhero pantheon is firmly rooted in the disciplines, lore, and traditions of American combatants throughout history. The creators of all these characters took a good look at real-life military heroes for their inspirations and now Mr. Inman makes this link clear.” ―Dan Aykroyd, actor/writer of Ghostbusters and The Blues Brothers

“Finally, someone takes a deep dive into two of our best American institutions. From Captain America to the rest of this elite unit, get ready to salute.” ―Brad Meltzer, bestselling author of The First Conspiracy

“Super Soldiers is a hell of a fun book. Jason Inman has written a love story to soldiers, to comic book heroes, and to his country. Witty, fast-paced, and nerdy (I mean learned) on his subject, Inman is a perfect guide for a deep dive into the interwoven historiographies and mythologies of American warriors and pop culture.” ―Anthony Swofford, former US Marine and author of Jarhead