Who’s the better pilot and can Han take down the entire Imperial Fleet by himself? This certainly isn’t pod racing anymore. Let’s speed in and find out who wins and who dies!

Since issue 38, Kieron Gillen has been flirting with the idea of the original heroes in the rebellion, as well as the first Death Star testing area in ROGUE ONE. What has remained and what’s the legacy left by those fallen heroes? Well, this story continues on that same path. It may not appear that way at first glance but if we look a bit deeper, readers will see what I mean.

Gillen opens the issue with Han trying his darnedest to escape Vader and unlock the fleet doors. With one last ditch effort, Chewie shoots Threepio directly into Luke’s Star Ship to deliver the message that the fighters need to fly directly at the bay doors initiating a fail safe that should open them before impact. Luke takes the lead and proves the theory true to the Rebellion. Gillen ends the issue showing readers that our heroes still have a fighting chance.

I’m a sucker for continuity and interconnected universes. To a diehard comic book/science fiction fan, and especially a Star Wars fan, seeing the movies, cartoons, and the comics weave together in such an amazing tapestry is pretty interstellar. In this issue, Gillen gives readers the origination of Luke Skywalker’s fighter squadron name from non-other than Jyn Erso herself! Luke’s exact words are, “I guess this is what Jyn Erso felt like.”

Gillen’s idea of interconnecting this was fabulous and Kieron has been sprinkling these ideas in since issue 38. Now, once EMPIRE STRIKES BACK hits and fans see Luke as Rogue Leader, it makes more sense than just a simple name someone decided to pick at one point. Gillen gives one of the coolest fighter squadrons in the galaxy a name after some of the most courageous and fearless groups of individuals in the entire STAR WARS universe.

Salvador Larroca’s art isn’t for everyone. I’ve seen many online with mixed opinions of the art style and photo rendering, as well as line work. Personally, I love the fresh, realistic, almost photographic images and likeness he gives readers and fans. There are times when the panels and images can look a bit weird. But overall, I think Larocca’s style leans more to throwing me into the universe and makes me feel like I’m truly reading an extension of the STAR WARS mythos.  Plus, I love Larroca’s take on the Star ships, Star cruisers, and space battles. ln addition, Guru-eFX’s colors are so bright, vibrant, and pop right off the page, especially the laser battles. Furthermore, I love the deepness of space that both Larocca and Guru-eFX portray through each and every issue. I’m totally in on their art.

Definitely! Larroca’s art is totally realistic and resembles the characters exactly while  Gillen‘s banter between Han, Threepio, and Chewie was spot on throughout this issue. It was a fast read filled with space explosions, Vader chasing down Han, and the only ship that can do the Kessel Run under 12 parsecs. Overal. it was a fun read that adds something pretty cool to the STAR WARS mythos. Pick this issue up!

You bet! And, this issue is the exact reason why EVERY fan of STAR WARS should be reading not only this issue, but STAR WARS comics in general. They expand the universe weekly in such a way that is so impressive, creative, and thoughtful that holds true to the mythos and is something the diehard fans can be proud of. If you’re a fan of STAR WARS, add this series, as well as the others to your pull list. Let’s face it, this was issue 52. You’re already about 52 months late to the party. Don’t be 53 months late. 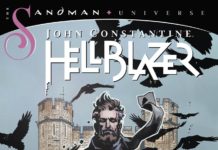