Shang-Chi #1 is this week’s beginning of a new series from Marvel Comics. Under fan-favorite writer, Gene Luen Yang, numerous artists like Dike Ruan, Philip Tan, and Sebastian Cheng provide several sides of the conflict. All while letterer Travis Lanham ties everything together.

Shang-Chi is a character whose creation comes from a reaction to the 1970s kung-fu movie craze. Originally planned to be an adaptation of 1972’s Kung Fu TV show, Marvel instead adapts elements from the pulp villain Fu Manchu. Under Steve Englehart and Thanos creator Jim Starlin, Shang-Chi combines those previous elements with the late Bruce Lee to capture the kung-fu trend. Shang-Chi would face his father, the Fu Manchu stand-in Zheng Zu in rejection of becoming an assassin. With a movie featuring the character scheduled to appear in February 2021, now is probably a good time to acquaint with the character. But after some guest appearances, people should know Shang-Chi as a character more than the legend.

Shang-Chi #1 The Burden of Family Legacy

Shang-Chi #1 pulls the reader into the life of the title character. People who are unfamiliar with Shang-Chi probably only see surface-level details like his impressive martial arts skills. It’s something that indeed defines his life, even at his attempts to live an everyday life. At the same time, this background is also what isolates him. He is so used to people trying to kill him that just a handshake from a pretty woman with no ill intent surprises him. But nothing seems to keep Shang-Chi away from his family past. Both when his boss brings it up and when his father’s cult is out for him again. It’s hard not to feel bad for the guy after all of this.

This time, things are just a little bit different. A new head of this cult, Sister Hammer, is out for blood to claim total control of this “Five Weapons Society.” But the only way she can do that is by eliminating Shang-Chi. By the end of Shang-Chi #1, however, Shang-Chi does get a personal stake in this story through his relationship with Sister Hammer. One that could be hopeful or outright devastating. Anything specific would spoil the tale.

How Art Creates The Legend 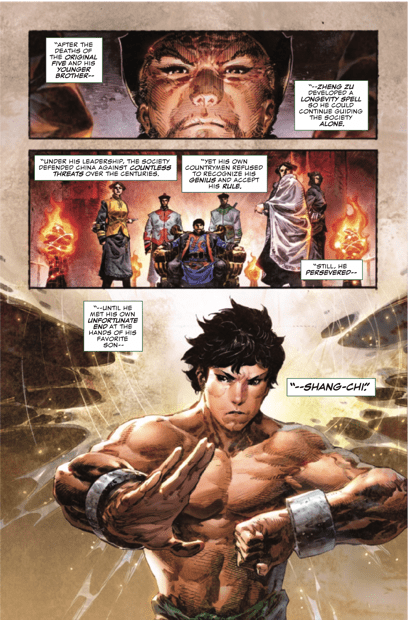 Shang-Chi #1 features several artists to illustrate the different aspects surrounding the title character. Philip Tan creates a very detailed that make what he draws look larger than life. The moments frozen in time look like portraits with Sebastian Cheng’s colors displaying the characters in all of their glory. Something the captions from Travis Lanham enhances through slowing down the reader’s gaze so that the reader witnesses them. 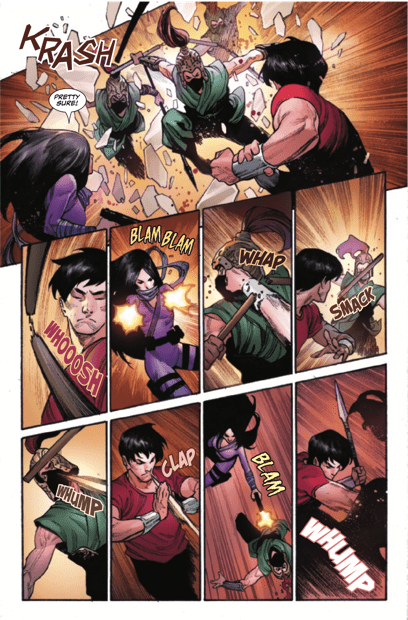 Compare this to Dike Ruan’s more relaxed art style. By separating Shang-Chi from his legend, readers find a normal man. Not that it takes away his ability to handle himself in a chaotic fight. The movements through some dynamic panels showcase not just the speed at which Shang-Chi moves but how he can cover multiple enemies more than a few bullets could.

See The Legend of Shang-Chi #1

Shang-Chi #1 is off to a great start by introducing readers to a character with legendary influences. But also by trying to show that despite this origin, Shang-Chi is still just trying to live his life to the best of his ability. What can we expect when the Five Weapons Society goes at him with full force? We’ll have to wait and see.

Shang-Chi #1 starts the series off by playing the legend surrounding him. It looks and sounds great on paper but to Shang-Chi himself, it's a burden he takes in stride.SHANG-CHI #1: The Opposing Parallel Sides Of Family Life