NEW AGENTS OF ATLAS Enter WAR OF THE REALMS

Amidst all the chaos and insanity of War Of The Realms, a new team emerges. Greg Pak brings us the New Agents Of Atlas in the latest tie-in to Marvel’s extremely fun event. 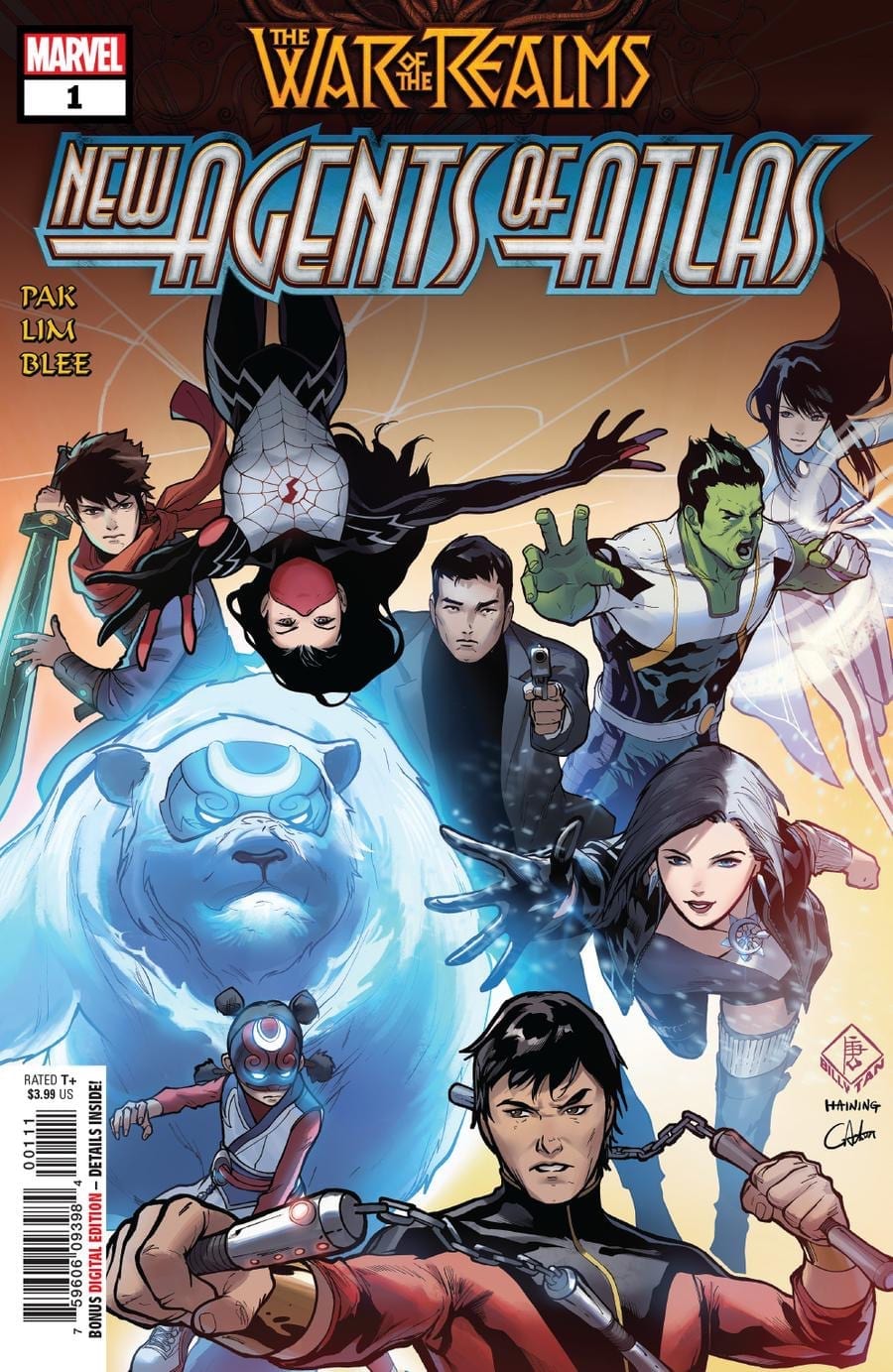 Our old friend Jimmy Woo is back within the pages of Marvel Comics to bring us the New Agents Of Atlas. This time he’s recruiting some of the up and coming heroes from the 616 before Malekith’s crusade forces them to band together.

War Of The Realms has been a wonderful crossover event hearkening back to when these huge stories were at their peak. It’s very fitting that now would be the time to resurrect a dormant title with an all-new team rising to face this universal threat.

The team’s lineup consists of a few faces you’ll recognize (Amadeus Cho, Cindy Moon, Shang-Chi) along with a handful of bad-ass women you may not be familiar with. War Of The Realms: New Agents Of Atlas #1 also marks the first appearance of Luna Show, a K-Pop superstar crime fighter. Crescent and Io make their comic book debut, coming over from the Marvel Future Fight mobile game.

Greg Pak is a veteran and absolute pro, this introductory issue is a very easy pill to swallow. We’re quickly introduced to a lot of characters but they all get their proper due enough to get the point across to the reader. There’s no fat in this issue, it’s straight to business and right into the action. 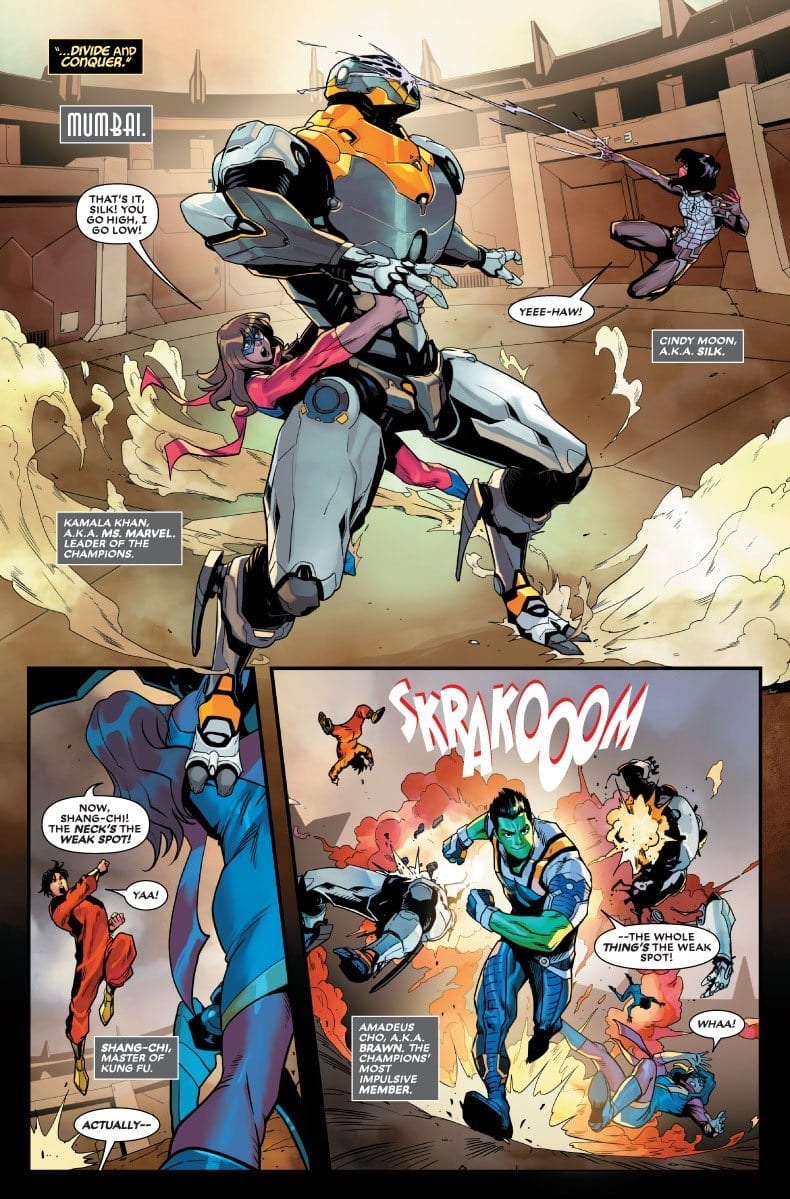 Gang-Hyuk-Lim also displays veteran talent, giving us an easily digestible and explosive first issue. Lim gives each new agent of Atlas distinctive characteristics and personality. The more this group develops into a team, there’s sure to be some wonderful looking action.

Colorist Federico Blee delivers a bright and upbeat display of color. Sindr and her forces specifically stand out with the color making the difference.

Kamala Khan is becoming like Spider-Man, appearing in title launches to get things off to a good start. Ms. Marvel is an absolute joy whenever she appears, her presence is the proper way to bridge the gap between Amadeus Cho’s tenure with the Champions into becoming an Agent of Atlas.

The only knock against the time each character gets is that we don’t get nearly enough Shang-Chi, but it’s for the purpose of getting a crash course in all the lesser known players. One of the biggest bad-asses in Marvel’s 616 is Shang-Chi, any time he gets a spotlight we’re likely in for a treat.

Shang-Chi’s relationship with Amadeus Cho could be an interesting one. After Cho’s recent Hulk rage episode he’s not as confident as we’ve come to know him. Shang-Chi telling him his worst nightmare is being charge makes for some juicy drama coming our way. 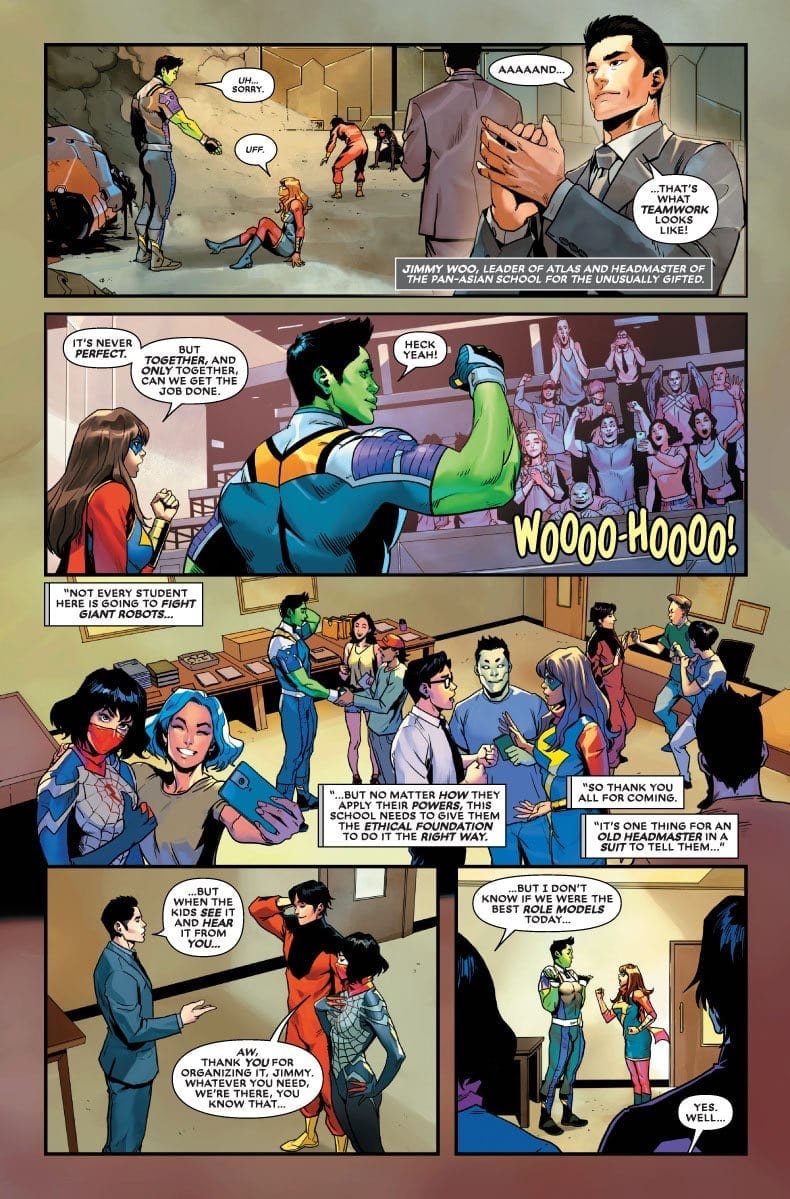 Pak chooses the forces of Sindr to square off against our Atlas heroes, a formidable foe. It’s revealed that Sindr actually tricked these elemental heroes into appearing in order to serve her evil agenda. The fact that this isn’t just a random collection of heroes facing a random horde of enemies bodes well for New Agents Of Atlas.

Cindy Moon (Silk) is an underrated character in her own right, it’s exciting to see Greg Pak plucking her from the unused character void and breathing new life into her. Silk has so much story left to tell after her brief involvement in both Dan Slott’s Amazing Spider-Man and Spider-Verse.

War Of The Realms: New Agents Of Atlas #1 properly resurrects and re-purposes a Marvel property that has been dormant too long. Greg Pak immediately proves he has a voice for a handful of underrated characters that deserve to be taken off the shelf (as well as some new ones).