Self-Published Spotlight: A GAME OF DOUBLES with Writer Jonathan Thompson

Welcome to Self-Published Spotlight, a regular interview column where I will be highlighting self-published comics and the cretors and small print publishers who make them.

Last week I had the pleasure to talk to the artist on A Game of Doubles, Ryan Tavarez (you can check out that interview here). This week, I’m talking to Jonathan Thompson, the writer of the series. Check out what he has to say about A Game of Doubles and then make sure to support the Kickstarter and get in the game with this book!

Monkeys Fighting Robots: Jonathan, as always thanks for the time to talk to us. So let’ get right to it. A Game of Doubles is your latest Kickstarter project. Can you serve us some details? Both on the book and your Kickstarter campaign?
Jonathathan Thompson: A GAMES OF DOUBLES is about Jackson and Franklin Teach, identical twin brothers celebrating their 50th birthday with friends and family at a nice country club. Jackson used to be number one in the world as a tennis pro but one game 18 years ago brought that to an end. Now, staring at his brother across the party hall he grips two vials in his pocket. One with cocaine, the other rat poison.

You can back the campaign really in 3 different ways…First is you pick a random ending. Being doubles there are two ways this story can play out. You can then get (my preferred artistic way) the 48-page flipbook version. This way you get both endings and you just flip the book around to read it. Finally, there is the Director’s Cut TPB which I plan on making really special…adding process and development of the book, so a ton of back-matter. MFR: Was A Game of Doubles seen as a Kickstarter project from the get-go, or did you have any other publishing plans for it as well?
JT: Kickstarter was the go-to place for this project. It’s an odd little book for a publisher, especially in its 48-page flipbook form. Honestly, there is just more power doing it yourself through KS. I don’t take a paycheck. Everything in the KS budget goes right to paying Ryan and paying for the printing/shipping. You know, it’s amazing how people from everywhere can see your project and bet on you as a creator. I really love it.

MFR: And how has the response to the campaign been so far?
JT: The campaign has been great so far. People really seem to be enjoying the concept of the alternate endings and Ryan’s magnificent art. I mean when you look at those pages how could you not love it?

MFR: The first two books I read from you were deeply rooted in genre, Tales of The Dead Astronaut was sci-fi, and the currently running Burn Residue is gritty crime/noir.  A Game of Doubles more ambiguous. Where did the concept for it emerge from? Did you approach this book any differently than your others?
JT: That’s a good question. I kind of think of this as a crime story as well…there’s definitely a dead person at the end whichever ending you pick. But, this whole story has been spinning in my mind for years now. It started just being in a country club bathroom for some event and thinking about a story that could take place there. Then I came up with the brothers. I started thinking of a little Hitchcock-style story of two brothers doing cocaine and knowing that there was poison mixed in. I wanted to play with the idea of the double or doppelganger and this all kind of came together for me perfectly. And in terms of my approach. When I was scripting I knew that I wanted to use that 8-panel grid but I knew that I wanted to use it to play with pacing and the doubling between the brothers.

MFR: Would you cite any specific artist or work as having an influence on A Game of Doubles?
JT: The first would be STRAY BULLETS by David Lapham. For the past year, I’ve been going through that gigantic UBER ALLIS edition taking my time and really letting the stories sit with me. Midway through the series, there are these wonderful one-off stories of these oddball characters going through life. Telling a perfect story in about 24 pages became my goal. Then I turned to this story that was sitting at the back of my mind for years and applied it to that STRAY BULLETS style. I think we nailed it. 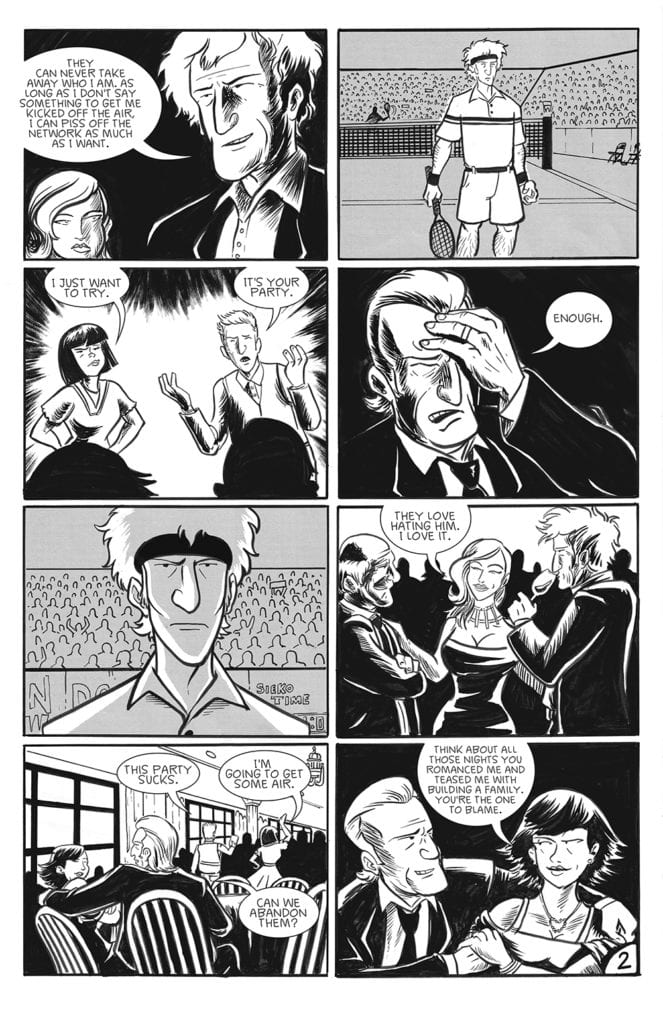 MFR: How did you find artist Ryan Tavarez?
JT: I found Ryan on Instagram through his work with NOMADS. I was a huge fan, to say the least. For the past year, I’ve been trying to find a project that would fit us both (and see if he was interested). After he read Burn Residue I think he was pretty game to see what I could come up with. So of course I sent him a tennis comic about twins doing cocaine in a bathroom to follow up his CONAN-like fantasy book…he turned out to be the perfect fit.

MFR: How do you two work together? What’s the creative process between the two of you? What are the logistics?
JT: We’ve been working insanely well together. I learned a long time ago to just let myself go to the creative journey that is making comics. All I knew was that it needed to have the 8-panel pages for rhythm and that I wanted Ryan to stick with just ink. No digital tricks. Just raw black ink. Once I got the thumbnails from him we were ready to run because he just nailed it. Now, I just have to sit back and wait for it to be done.

MFR: Tennis and the tennis world seem to be a big part of A Game of Doubles. Is the sport something you have always been interested in? Was the sport always part of the story?
JT: Tennis came from the Hitchcock influence. In the late British and early American films of Hitchcock, he used sports players a lot. I think of THE MAN WHO KNEW TOO MUCH and STRANGERS ON A TRAIN. I liked that element. It gave me something to bounce off of. It provided dramatic action as well while the brothers talked and partied. Then I watched IN THE REALM OF PERFECTION, a documentary on John McEnroe and really that was it. The book kind of emptied itself out onto the page after that.

MFR: So when does the Kickstarter end? And do you have any stretch goals or surprises in mind?
JT: Let’s focus on funding first, Manny! If we get lucky to pass our goal…I’ll definitely set a stretch goal for the sequel… and I have one more pin-up that might be coming in that is very on-brand for the STRAY BULLETS influence.

MFR: Anything final you would like to add?
JT: Check out the campaign and see if you dig it. My whole back catalog of work from TALES FROM THE DEAD ASTRONAUT to BURN RESIDUE along with Ryan’s NOMADS are on the add-ons section. You can get the full package for what I’ve been up to for the past year. I’m all about good comics…I hope you all enjoy them. And I have a newsletter…