Second Coming, the new book by Mark Russell, is going to offend a lot of people. The concept alone had rattled some cages when it was announced last year, forcing DC Comics to cancel the series less than a month before it was scheduled to be released through their Vertigo imprint (RIP). Thankfully, newcomer publishing house AHOY Comics scooped the book up shortly thereafter.

If you were curious as to how Second Coming came to fruition, as well as learning more about the controversy surrounding the book, you can read the Monkeys Fighting Robots interview with writer Mark Russell. But without delving further into the preemptive hate that this book received, does Second Coming #1 deliver from a comic book storytelling perspective? In short – hell yes. 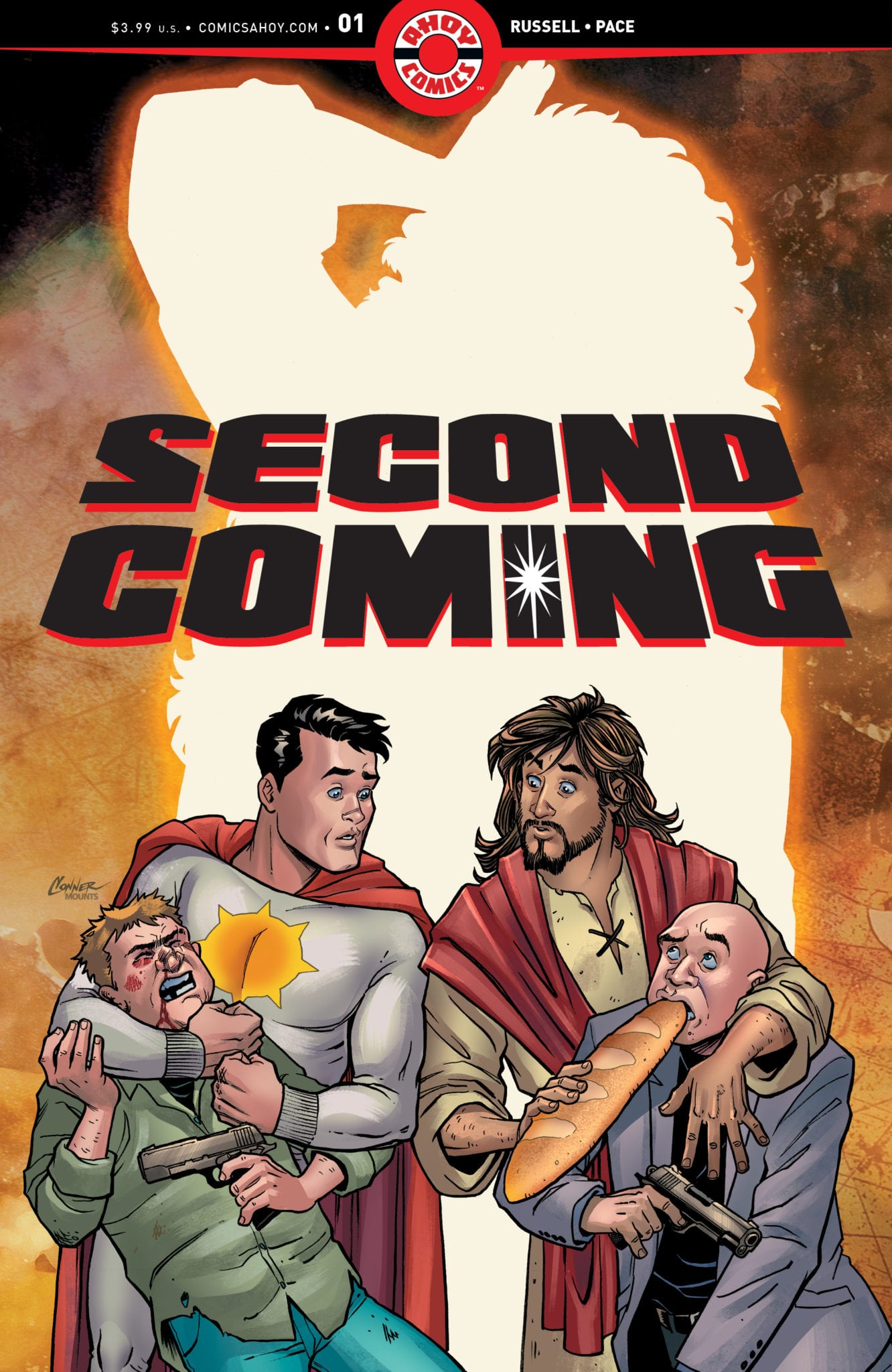 Second Coming follows Jesus Christ as he returns to Earth and discovers that his teachings have been distorted. To rediscover his inner messiah, Jesus becomes roommates with humanity’s superhero savior, Sun-Man, the Last Son of Krispex.

One’s a superpowered hero from another planet. One’s the righteous son of God sent to Earth. Can you smell the divine comedy that ensues? Actually, the pairing of Jesus and Sun-Man doesn’t actually happen until about two-thirds of the way through the first issue of Second Coming.

In the beginning, rather, writer Mark Russell takes readers through his brief and crude bible lesson. Russell really doesn’t hold back on any punches, particularly with his not-so-subtle interpretation of the sacred fruit from the Garden of Eden. His take on God might ruffle a few feathers. The Almighty is a wise-cracking, wine-swilling, loud-mouthed, somewhat selfish deity who has lost his faith in humanity. This is a great counterbalance to Jesus Christ, who is presented as kind and optimistic, looking for a way to bring mankind back in the good graces of his father.

When God wants to “toughen up” his son, he sends him to Sun-Man. This faux-Superman is, in classic biblical fashion, unable to have a child with his human wife. Sun-Man also has a knack for kicking ass first, asking questions later. This offers a unique dynamic between the super hero and super son, who offer opposing views on how criminals should be dealt with. If the first issue of Second Coming is any indicator, Russell’s exploration of the duo’s relationship, along with his hilarious observational comedy, will make this book one of the most important series on shelves today.

There were two slightly different styles of artistry in Second Coming to offer a distinctness between the biblical era scenes on heaven and earth, and the scenes in the modern world. Artist Richard Pace uses a rougher, etched style for the biblical times, as if scratched onto a cave wall thousands of years ago. Leonard Kirk stepped in as the finisher on the modern scenes, which give off a much more traditional, comic book feel. Colorist Andy Troy offered a vibrant, bright palette, reminiscent of something right out of Action Comics. It’s a nice contrast to Pace’s darker, oil painting style.

There is so much humor packed in its pages, but the true spirit of Second Coming is within the moral dilemma presented, a profound message that will ring true for anyone of any background.

What did you think of Second Coming #1? Let us know in the comments!

Review: SECOND COMING #1 is a Divine ComedyThere is so much humor packed in its pages, but the true spirit of Second Coming is within the moral dilemma presented, a profound message that will ring true for anyone of any background.