Review: YOU LOOK LIKE DEATH #2 Is Strange And Normal All At Once

Dark Horse’s Tales from the Umbrella Academy: You Look Like Death #2 — written by Gerard Way and Shaun Simon, with art and colors by I.N.J. Culbard, and letters by Blambot’s Nate Piekos — balances its weirdness with a shot of normal life. For every vampire-chimpanzee-crime lord, there’s a baby crying on a plane. This series makes time for the little moments, in the midst of unadulterated strangeness.

Way and Simon create a charming rhythm in this series. They seamlessly blend small moments with big, strange ones. As the Shivers follows Klaus to Los Angeles, we don’t skip to the big comic booky moment of their confrontation. Instead, we see Shivers being fitted for a suit. You Look Like Death #2 is interested in the stuff that usually gets glossed over. So while some of this issue is about vampires, hard drug use and ghosts, we also get to see people take their blood pressure medication and talk about the books they’re working on. It creates an exciting unpredictability. Are we going to see Klaus fight a giant robot, or is he just going to order another cup of coffee? Either way, Way and Simon know how to keep you glued to the page. 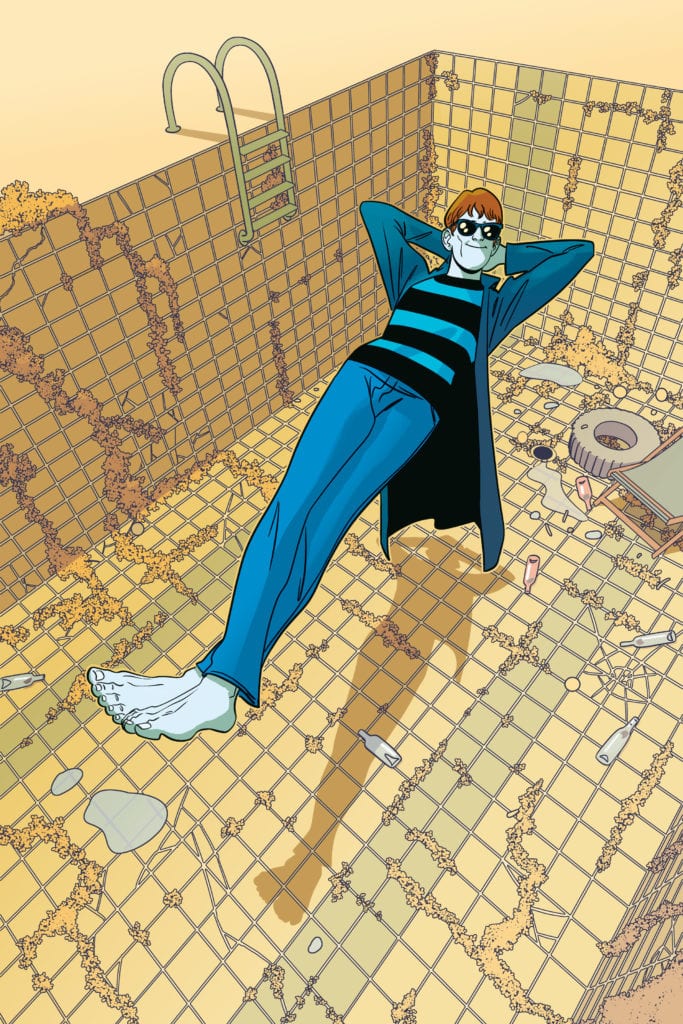 Culbard shows us the world as Klaus sees it. As Klaus hovers above a party, we see the faces of all of the guests looking up at him and smiling. For the most part, they look almost identical. They’re smiling, that’s what matters. Klaus doesn’t care who these people are, he just cares that he’s entertaining them. And later, as Klaus is trying to put traumatic memories out of his mind, Culbard makes it so that his flashbacks interrupt the rest of the page. These flashback panels are superimposed over other panels so that they actually get in the way of some of the art. Culbard makes it so these memories are literally getting in the way of Klaus living in the moment. The only way he can escape them is by escaping reality altogether.

So much of You Look Like Death #2  is shown in vibrant colors. We get the bright green ghosts, an almost neon shade of pink for Viv’s wallpaper, and the haunting blues of Klaus’s past. Sometimes it feels so bright you almost have to shield your eyes. But that’s Klaus’s life — a kaleidoscope of colors. So when he enters “the void,” Culbard’s palette feels comforting and toned down. Nothing but light blues, warm oranges and dark browns. It feels like walking into a dim room after straining your eyes at the sun. And just as it feels like a welcome change of color palette, Klaus feels like he too can finally put his feet up. 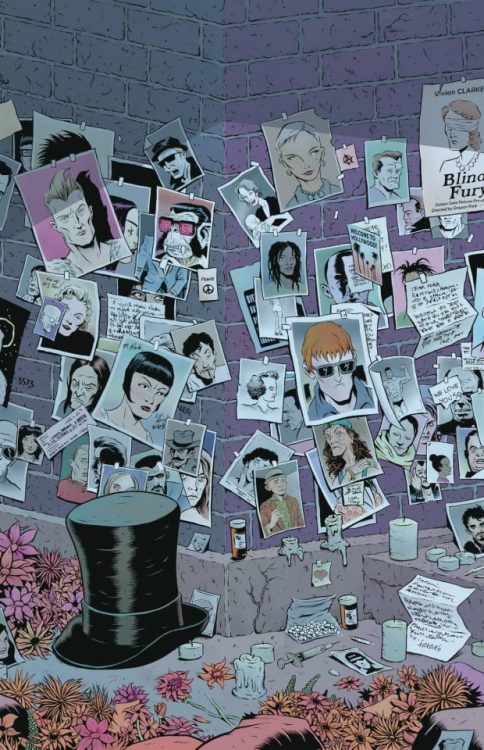 Piekos tells us some subtle things about these characters with his lettering. At one point, the vampire crime lord named Sage is yelling at the Shivers for coming in and trying to take his territory. One of Sage’s men yells at him and slaps Sage across the face. Piekos writes this as him yelling “Snap out of it, man!” connected to another balloon that’s more calmly saying “The hell is wrong with you!?!” The first moment is yelled, and the second is spoken, with the “WAP” noise of Sage being slapped in the middle. This shows us how Sage’s men keep him in line. They yell some sense into him and then make sure their words got through.

Piekos also shows us an interesting relationship between Klaus and his channeling of ghosts. The tail of each balloon when he’s channeling someone is curved and wavy. It, in and of itself, kind of looks like a ghost. But when Klaus is injecting himself with drugs, his dialogue looks the same. It makes us wonder, does Klaus get some kind of high channeling the dead? And if he does, does that begin to explain some of his complicated relationship with his powers?