Review: X DEATHS OF WOLVERINE #4 Reveals the End for Mutants

Moira X is trying to eradicate the X gene

The fun thing about this series is that it takes place immediately after Inferno. Benjamin Percy has been writing Wolverine since X-Force #1, so he has a good grasp on who the character is. This book is a little different though since it uses alternate versions of Wolverine. This future version of Wolverine is different, but still has a lot of the same priorities. Wolverine still values his family and kids. We see this as Logan confronts Arnab. One of the reasons Wolverine has come back is to stop his family from dying horribly. He discusses this with Arnab and uses it as motivation to complete his mission. Percy has done a great job of villainizing Moira throughout this series. This issue she does something so despicable that she can never go back to being a decent person. This behavior feels like a natural progression for a character that feels betrayed and abandoned by everyone she loved. 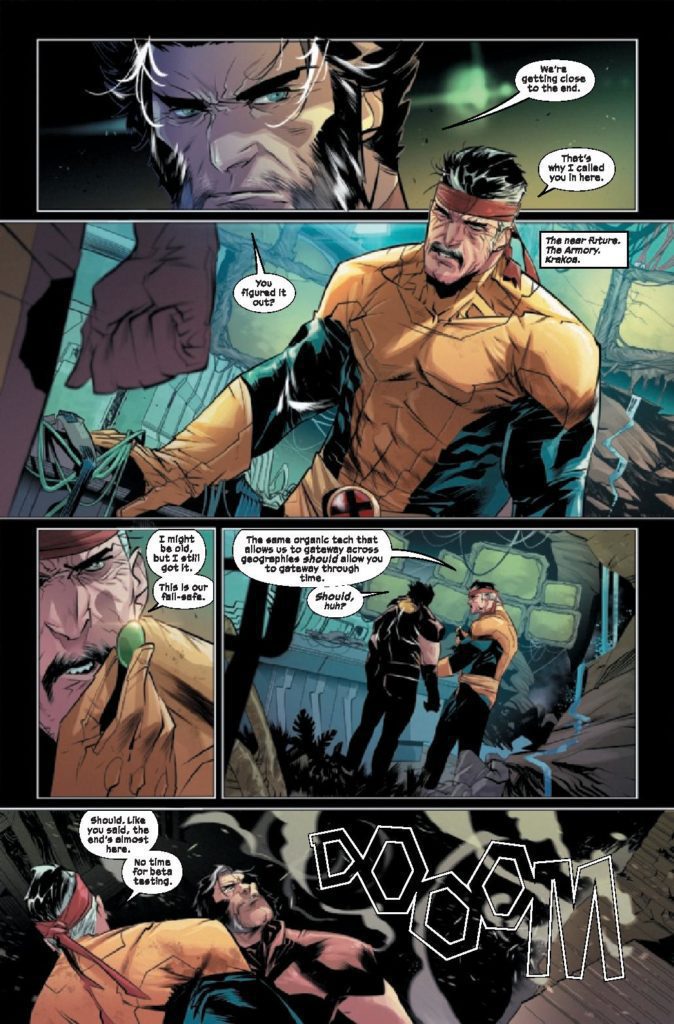 The pencils by Federico Vicentini offer a good art style to go along with Percy’s script. Vicentini doesn’t overcomplicate the backgrounds on many panels. Sometimes things can get too messy and too detailed, but Vicentini allows the panels room to breathe by not bogging everything down. There is a panel that will most likely stick with you after reading this issue. As Moira does an unspeakable act, she disregards any care she had for mutant kind. Vicentini draws this panel very creepily. The look on Moira’s face afterward shows us that she’s dead inside.

Dijjo Lima steps up and takes on the coloring duties for this book. The color palette is lighter for this issue with lots of pastel like blues and reds. The gold on the future Wolverine really sticks out. The Phalanx gold is a good contrast to the dark colors on the rest of Wolverine’s costume. As Moira faces off against an astral Professor X, Lima uses a texture on Xavier to blur his form. This blurred and faded image breaks up the colors used in the rest of the issue. It makes thing visually more interesting for a couple of pages.

The letters by Cory Petit work well with this style of art. In the beginning of the issue, as sentinels come for Logan and Forge, Petit uses a transparent “DOOOM.” No Wolverine book would be complete without the infamous “SNIKT” as Logan unleashes his claws. The sound effects for this issue really enhance the reading experience and that is, by and large, thanks to Petit.

This may be a different Wolverine, but his love for his family is still strongReview: X DEATHS OF WOLVERINE #4 Reveals the End for Mutants