Review: When the Cat’s Away in THE GHOST IN YOU

Ethan Reckless is out of town on a case. His assistant, Anna – a pink haired, bespectacled punk rocker – is more than capable of holding down the fort. Trouble is, she’s got her boss’s knack for attracting mountains of trouble. Image Comics’ The Ghost in You, the fourth book in the Reckless series, is a fresh, satisfying new chapter in this already brilliant run. Writer Ed Brubaker, artist Sean Phillips – the creative team behind classics like Fatale, Kill or Be Killed, Criminal, and Pulp – and colorist Jacob Phillips, take us through haunted houses and family trauma in their new Reckless book.

Though the stories in this series are narrated by Ethan Reckless – our grizzled private eye with a name that matches his lifestyle – Reckless doesn’t show up much in The Ghost in You. Instead, his assistant Anna runs the show. It changes everything about this comic. Even Ethan’s tone in his narrations has a lighter, funnier feel to it. Anna is a breath of fresh air, so naturally the book where she’s pulling the strings would feel the same way. This book is easygoing and fun. But Anna is also more complicated than that, and so is Brubaker’s script. She’s the kind of character who isn’t sure if she believes in ghosts, but knows she no longer believes in people. She’s quick to smile but quicker to scowl. The Ghost in You, like Anna, looks like a mosaic at first. It’s full of scenes, themes, and storylines that feel disconnected. But when you back up, you see it’s all part of the same complex picture. Brubaker will make you laugh, wince, and cry all within a single page, for vastly different reasons. He’ll make you feel scattered and confused by the emotional rollercoaster he has you on. But in the end, you’ll be brought back to the beating heart at the center of his story, and it will suddenly all seem simple again. 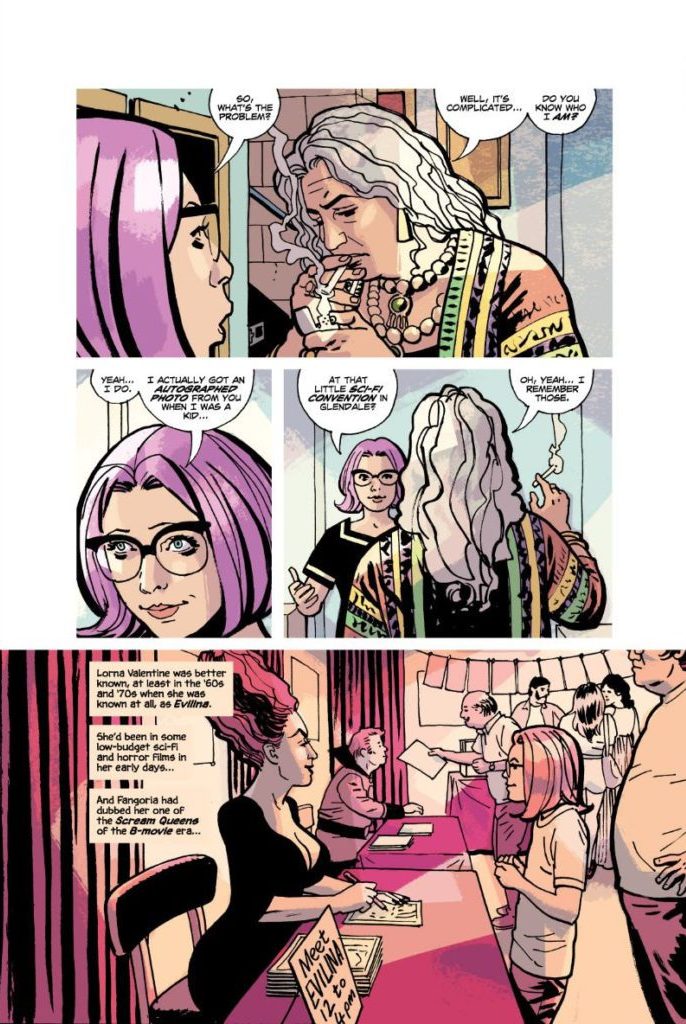 One thing that sets Anna and Ethan apart is their relationship to the rest of the world. Ethan has a huge presence. He’s often pictured looking down at the people he’s getting information from. Anna looks up at people. You could chock it up to a difference in height, but there are a few telling moments in The Ghost in You where Sean Phillips shows there’s more going on. For one thing, Anna’s placement in each scene communicates an uneasiness in the job. She’s not as confident as Ethan is with other people. But when she’s doing research, something that she loves and feels good at, she’s always looking down at her work with a collected and self-assured look on her face. Even when she calls an old boyfriend for some help, she gets lost in some blueprints and is shown eye-to-eye with him, on his level. The same is true when Ethan’s old handler, Frank, hands Anna some findings on someone he looked into for her. She stands above him, engrossed by the papers he’s handed her, while he sits in a chair nearby. She comes alive with factfinding and analysis. You see it in how she holds herself in each panel where she’s doing research. But put her in a room full of people and her wry smile becomes a determined grimace. She shrinks under the presences of other people. She’ll do the work, but she sure as hell won’t enjoy it.

Jacob Phillips’ coloring is succinct, yet full of texture and stylistic flare. He gives you a keen sense of the lighting in each scene, while ensuring that everything still has a painted look to it. Streams of light pour over buildings and streets, flowing in beautiful, uneven brushstrokes across each setting. Trees and backgrounds are shown in dappled colors, sometimes looking like paint that’s been flung at a canvas. At one point, Anna is walking through a dark house, guided by the light of a flashlight. The glare of the flashlight is reflected in her glasses, shown in yellow and orange blocks that collide together in front of her eyes. The best way to describe Phillips’ coloring work is that it almost looks like an Impressionistic painter brought these pages to life. Phillips clearly has a thorough understanding of light and shadow. The placement of his colors is precise, but the colors themselves almost seem to be in a brilliant war with one another. They jostle together, mixing and overlapping to create stunning effects. 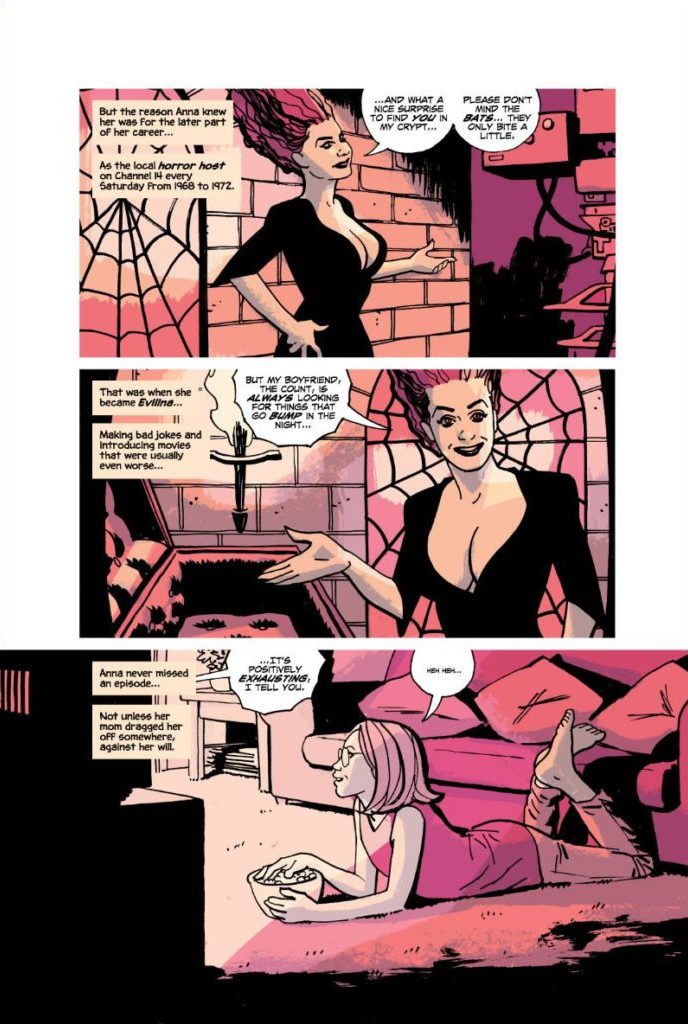 Sean Phillips gets quite experimental with his lettering in this issue. We get a couple of things that we’ve seen before: small lettering in a bigger word balloon to show a character saying something under their breath, or the straight edges to a word balloon of someone who’s panicking. These effects make these moments stand out. You can hear the quietness of one moment and the panic of another. But there are several effects that are new to this series. Anna plays some old punk rock music on vinyl at her apartment. The lyrics are shown in jagged balloons that have a thick, scratchy black outline to them. The words are barely contained by the balloons, some letters getting lost in its borders. It’s the sound, the feeling these words are creating that’s important, not what they’re actually saying. At another point, Anna gets into a fight with someone. In the aftermath, someone asks “Hey, are you okay?” The font is blurred, like it’s coming through a fog. If you listen, you can almost hear the ringing in Anna’s ears that’s drowning out all the noise.

It’s no surprise that Reckless continues to be a great series. It would be a surprise if this creative team ever came out with anything less than excellent. But a Reckless book that focuses almost exclusively on Ethan’s assistant, Anna? It’s a great premise with a flawless execution. This book is funny, sad, and altogether riveting. You don’t want to miss the latest installment in the Reckless series, The Ghost in You, out from Image Comics April 13th at a comic shop near you!

It's no surprise that RECKLESS continues to be a great series. It would be a surprise if this creative team ever came out with anything less than excellent. But a RECKLESS book that focuses almost exclusively on Ethan's assistant, Anna? It's a great premise with a flawless execution.Review: When the Cat's Away in THE GHOST IN YOU