In this week’s The Walking Dead, we got to focus on a lot of the show’s strong female characters. Carol and Maggie played the protagonists throughout the episode, clashing with TWD newbie Paula and her female Savior squad. We’ve still not met the mysterious, murderous Negan, but the show is doing an excellent job of building up the legend of Negan ahead of his appearance. Instead of giving us Negan, however, The Walking Dead reintroduced us to Carol and gave an excellent look at how her character has changed since the beginning of this season.

I was very on edge when they began messing with Carol’s character formula. Sure, her harsh words essentially got Sam & his family killed, but it was still working for her very well. Since Sam’s death and her standoff with Morgan, The Walking Dead has begun softening those edges, and Carol’s been doing out of character things, like kissing Tobin’s face and keeping a death toll diary. When they tried working this in on last week’s episode, it felt forced and messy. This episode, however, really solidified what their goals are for Carol going on from here. The new Carol hasn’t entirely lost her killer instincts – she was able to cut herself free and kill the Saviors that had her. But it’s now a ruthlessness informed by necessity and motherly instinct. She was more than willing to let Paula walk free, but once Maggie’s baby was threatened by Michelle (not Michonne), Carol didn’t hesitate to go for the kill shot. It’s not that she’s abandoned her fighting spirit for religion and beet cookies. She’s a conflicted character, seeing the opportunity presented by Maggie’s pregnancy as a chance to redo her mothering of Sam. Or Sophia. Or maybe Lizzie & Mika.

The only possible downside to Carol’s transformation is that Maggie seems to be taking the same path of development as Carol. Certainly not to the same extreme – Maggie wanted Paula to get shot down the moment she was in range. But neither Carol nor Maggie felt good after barbecuing the remaining Saviors, and Maggie’s final line for the episode cinched that she wasn’t feeling too hot (get it?). It’s another informed change, as Maggie’s now got the life of her child to consider as well. But the fact that it’s coming along at the same time as Carol makes it feel cheaper. Not to mention the fact that a similar loss of bloodlust is taking place in her husband Glenn, too. Maggie just had an incredible scene where she dominates Gregory and gets the group half of Hilltop’s supplies. Will Maggie be abandoning this bold, authoritative figure once her child’s been born? And thinking of the cast as a whole, are we getting to a point where more and more characters can’t bear to kill? The Walking Dead is, after all, a show about dead people attacking alive people, so there’s got to be a good number of people making a stand to keep the momentum going. 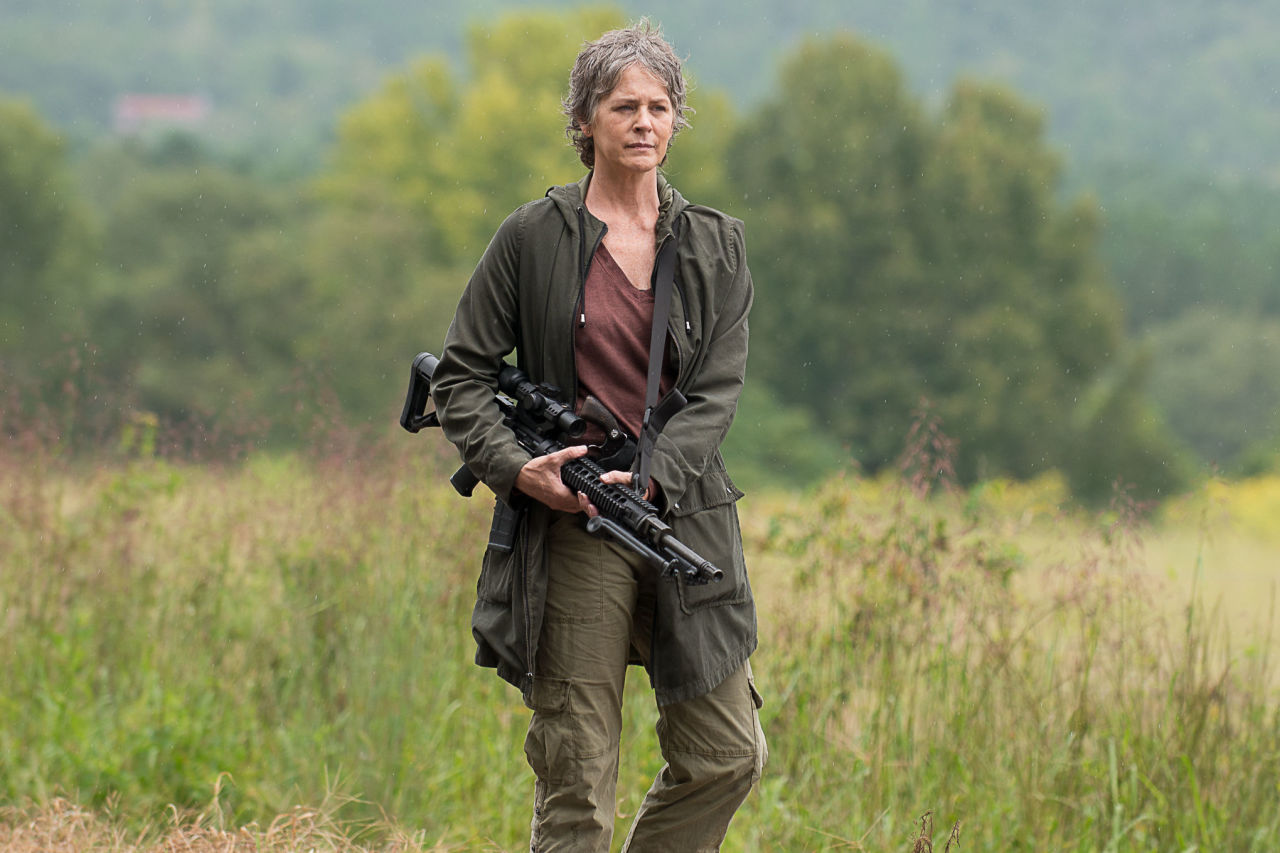 The way I can see this concept working is through this episode’s reveal of who Negan is – or rather, who “Negan” are. The Saviors bringing out this “we’re all Negan” concept is pretty interesting, in what this sets up for their personalities. We already know there’s a definitive Negan that will exist, but the concept of a whole group of people embracing the same name of a brutal, bloody killer sets up a new group war that promises to be the fully fleshed out conflict that we never really got with the Wolves. If the group does let themselves get soft, with their children and home base and reignited love lives, it could make for a particularly bloody encounter to end the season. That’s how it can set up for an interesting argument – that once the Alexandrians have gotten comfortable in their new roles and new home, only to have The Negans take it all away. And when that day comes, the Alexandrians had better hope they have their killer instincts. As well as their rocket launchers.