There are plenty of superheroes in the annals of comics lore who operate in the shadows. I think it’s fair to count Vampirella among them; perhaps as more of an antihero than a conventional superhero. One thing common to most of them, though, is a penchant for daring—and often public—deeds. Being in the public eye doesn’t mesh with Vampirella’s persona. But, when her dedication is questioned in Vampirella #4, out this week from Dynamite Entertainment, she’s forced to choose whether to remain hidden or to reveal herself. 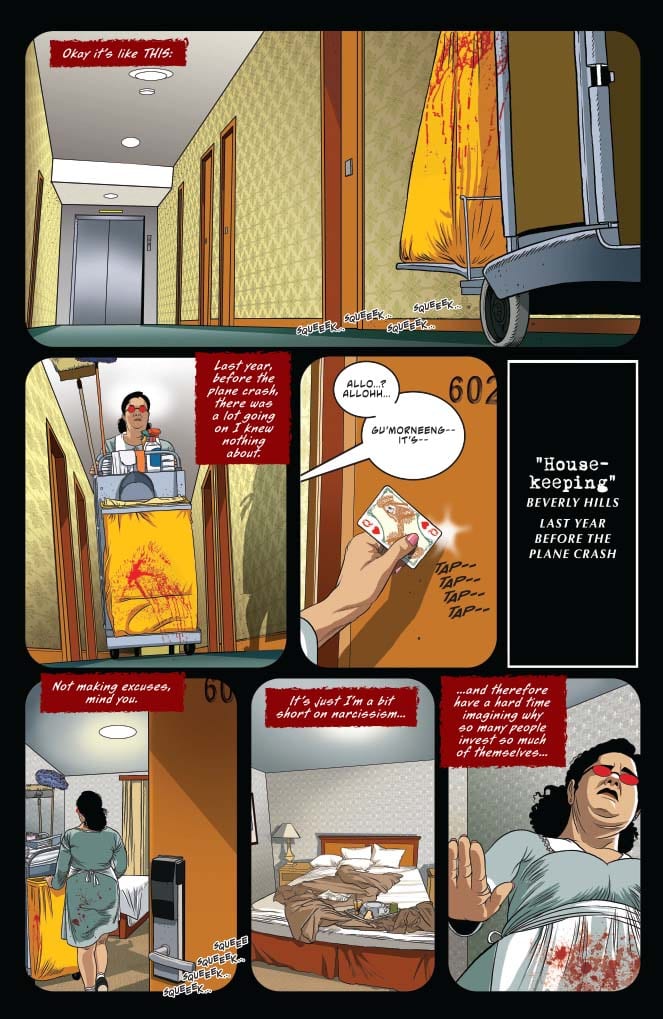 Writer Christopher Priest’s narrative struggled somewhat to find its footing in the few first issues of this new run. Vampirella #4, though, sees the book really hit its stride.

The issue opens with the undead Von Kriest reenter the narrative in a flashback to before the plane crash. Of course, this is just laying groundwork for further developments, as we soon refocus on our protagonist’s own turmoil. In contrast to earlier issues which felt somewhat scattered and unfocused, the writing here is sharp and well-paced. We learn more about Vampirella’s relationship to The Six Marys, and to her other human counterparts. Specially, how they experience, and relate to, their sexual identities and anxieties about them.

In addition, Benny the Witch emerges as a much more interesting character in Vampirella #4. Although he’s popped up here and there, it’s in this issue that we really get a taste for his persona. He’s equal parts sardonic comic relief and moral voice; a Jiminy Cricket figure with a taste for gallows humor. Benny also serves as a foil to Vampirella’s guardian Eustankhios (Stan, for short), who has a much more amoral and dismissive reaction to Vampirella’s heroics.

The writing in Vampirella #4 is concise, yet hard-hitting. Earlier issues had spans that felt inconsequential, even dull in their extraneousness. Here, though, Priest doesn’t waste any words. This is the most compelling, and most complete, issue yet in the story, and it feels like we’re headed somewhere great. 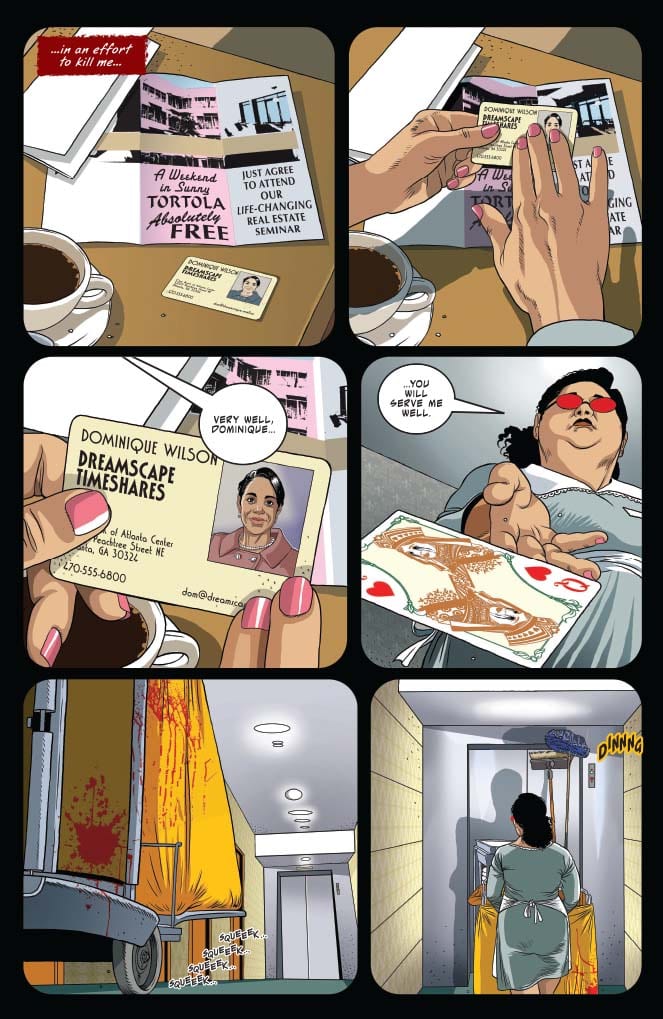 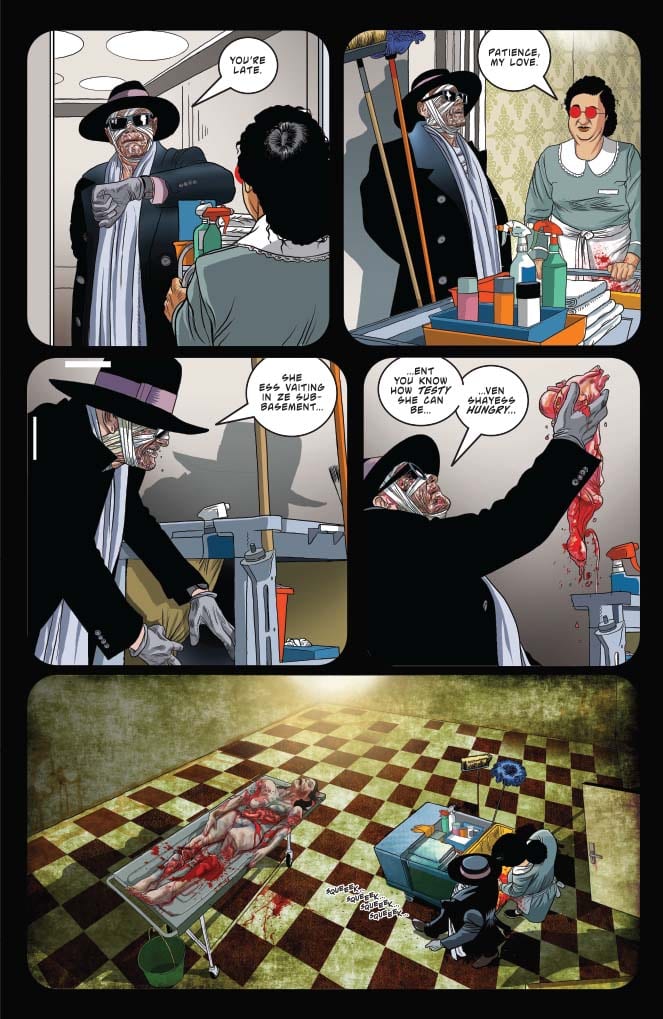 Ergün Gündüz clearly has an eye for symmetry in his compositions. Throughout the book, we see panels divided neatly into a fairly-consistent grid format. The artist’s illustrations match the tone and emotional pitch of the narrative well. However, the strict adherence to the format of the pages can sometimes clash with the story; some panels feel overly-cluttered with word bubbles, distracting from the artwork.

The art, as a whole, is solid. Gündüz provides more of the enticing and lively action we’ve seen in earlier issues. Panels, especially when the action picks up in the book’s latter half, carry momentum from one to the next and accentuate the storytelling.

That said, the artist sometimes has issues creating convincing facial expressions. Characters’ faces, especially that of our titular heroine, sometimes feel rather cold and lifeless; their eyes a little too much like dolls’ eyes. This isn’t an issue unique to Vampirella #4, though. It’s remained a consistent gripe over these last few issues.

Gündüz also provides colorwork for the book. He opts for a very earthy palette of tones, with browns and darker greens dominating much of this issue. While not always the most visually exciting, it’s skillfully applied and compliments the linework well. 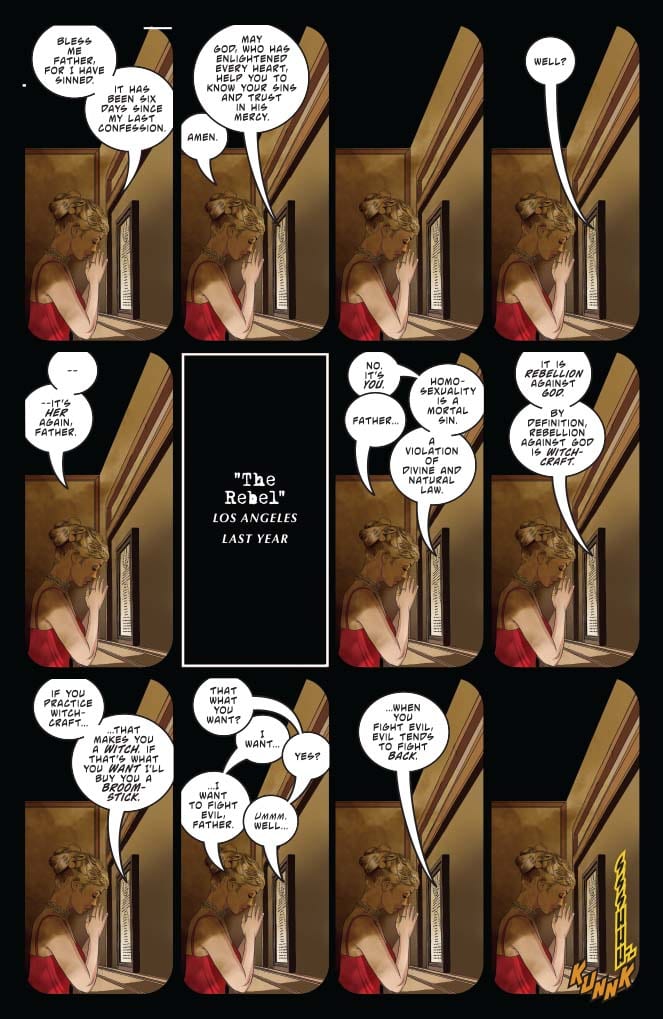 Vampirella #4 reads like a turning point for the series. While the first three issues felt more like prologue, this book gives the impression we’re really starting to advance the narrative. I recommend it.

VAMPIRELLA #4 delivers the strongest storytelling yet of Christopher Priest's run. The prologue is over; we're picking up momentum with a compelling narrative and solid artwork.Review: VAMPIRELLA #4 is a Narrative Turning Point