Review: VALKYRIE JANE FOSTER #1 Back in the Saddle Again

Post War of the Realms, Jason Aaron takes the helm, along with Al Ewing, for a new Jane Foster story as the last Valkyrie.

Aaron’s run on Thor saw Jane become Thor, culminating with her “death” in #705. This is the story of what comes next. CAFU is taking care of the pencils in this series, and right off the bat, you can see that this is some of the best interior art among current Marvel books. Ewing’s run on Immortal Hulk takes the series back to its horror roots; in Valkyrie, he’ll have Jane juggling her lives as a superhero and a doctor. Since the writing duties are split, it appears Aaron will be writing most of the story as it pertains to her human life and saving lives on Midgard. I think Ewing will be handling her other role with death as the last Valkyrie. Jesus Aburtov has the colors on lock. The armor glistening in the sun and the bursting weapons impacting during battle make for captivating fight scenes, as we are learning what Jane can do with her new powers. Joe Sabino has lettering duties and he is perfect for a story diving into the depths of Valhalla. The gold letters on a multi-hued blue background, matches the lead character and conveys a sense of regalia. 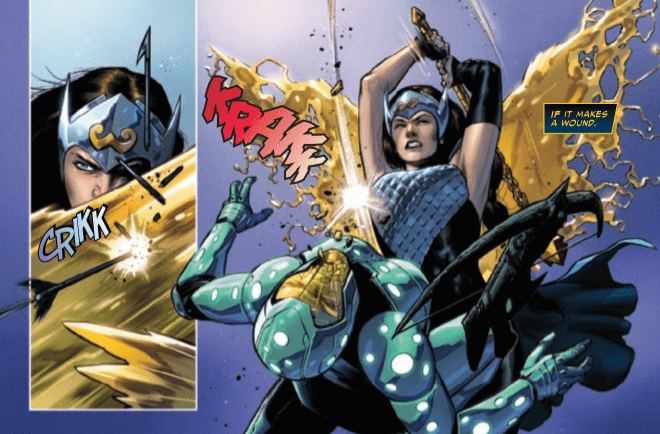 Valkyrie opens with Jane sizing up the Fast Five, who have robbed Damage Control and taken some Dark Elf and Asgardian weapons, Dragonfang being one of those weapons. Introducing Undrjarn, Jane’s new All-Weapon, that seems to change shape into whatever she needs at the time. Silver Ghost of the Fast Five uses her powers to become invisible, proving to be of no use against Jane with her new powers, as she can see Ghost flee and easily incapacitates her. Gold Rush, the coward of the group, possesses Dragonfang so Jane goes after him, before she can get to him, Redline throws a car full of people, allowing Gold Rush to escape with the sword. He doesn’t get too far as he is tripped up by a dark shadowy figure who stabs Dragonfang through GR’s heart. As we have learned, having two lives is quite tricky to maintain, so while Jane was fighting as Valkyrie, she arrives late to her own performance review at the hospital. 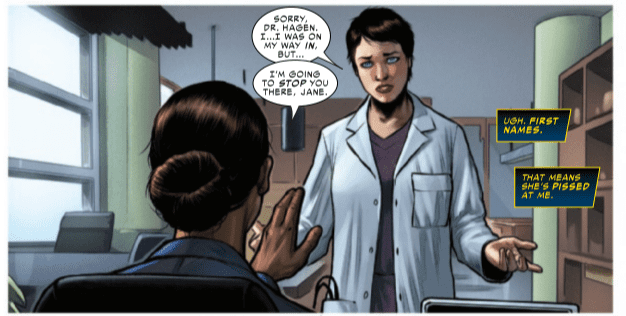 Jane is transferred to Morgue Assistant, upon arriving there is already a body present with a familiar wound, the body is Gold Rush. Learning this Jane summons her Valkyrie powers and teleports to Valhalla, here we learn the All-Weapon is also the key to the gate. Brunnhilde is inside, the owner of Dragonfang, and she explains the powers of this sword and why it is so dangerous in the wrong hands. Jane explains that she knows what she’s doing; she was Thor, then Brunnhilde delivers my favorite line of the book “Thor is a God. Valkyrie… is a job” The wielder of Dragonfang is given the ability to hide from God-Sight, so Jane recruits the help of Heimdall, who’s eyes are healing after the War. Jane gains some understanding of how to control her power that allowed her to see the invisible villain from earlier. She can also see the fates of anyone she looks upon; their deaths are visible to her.

Jane explains everyone has a fate, some large and some tiny, as she turns to Heimdall she sees that his is the largest of all. Rising from behind, we see Gold Rush’s murderer and Dragonfang’s newest owner. It’s a shocker!

Hopefully, Ewing has some awe-inspiring Valhalla quests lined up for this book. We’ve seen his version of Hulk’s hell. I can’t wait to see Jane navigating the world of the dead and see what horrors she comes back with. CAFU’s art in this first installment is absolutely gorgeous and Aburtov brings out the best in the art by blending the colors so realistically almost every millimeter of every page is a different color or different shade. Bringing the art alive with glowing eyes and shimmering weapons is exactly what you would expect from a story about a former God.

Pick up the issue on Wednesday to see how it ends. 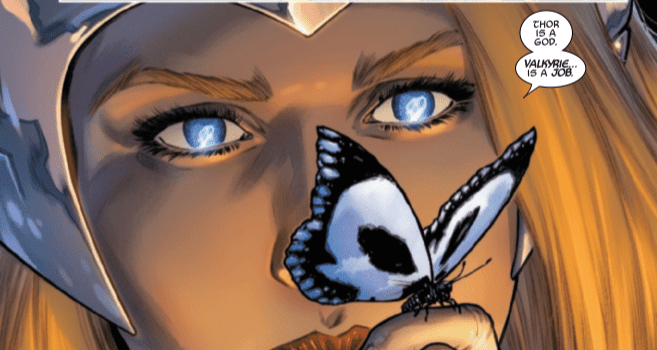 What do you think of Jane Foster’s new role in the Marvel Universe? Is this a peek into Natalie Portman’s future in the MCU as well? Let us know what you think in the comments.

Jane Foster becomes the new Valkyrie without having a grasp on everything she can do. New powers, new responsibilities, new job, this book serves as a great introduction to an old character in a new role. Excited to see how Jane reacts to her new jobs with the dead.Review: VALKYRIE JANE FOSTER #1 Back in the Saddle Again