Review: Triage #4 is an Emotional Punch to the Gut

For the past four months, Phillip Sevy has been churning out some of the most visually interesting, emotionally resonant science fiction on comic book shelves. His book, Triage, is the story of three parallel universe versions of the same woman. Evie, Marco, and Orbit are hunted across realities by an alien killer and tasked with saving all of the multiverse. In issue four, Sevy begins his wrap-up to the series, placing our heroes in an almost no-win situation against time and their pursuer. It’s a penultimate chapter for the ages, inching us toward a conclusion that promises to be as deadly as the series’ armored antagonist. Read on to find out more. 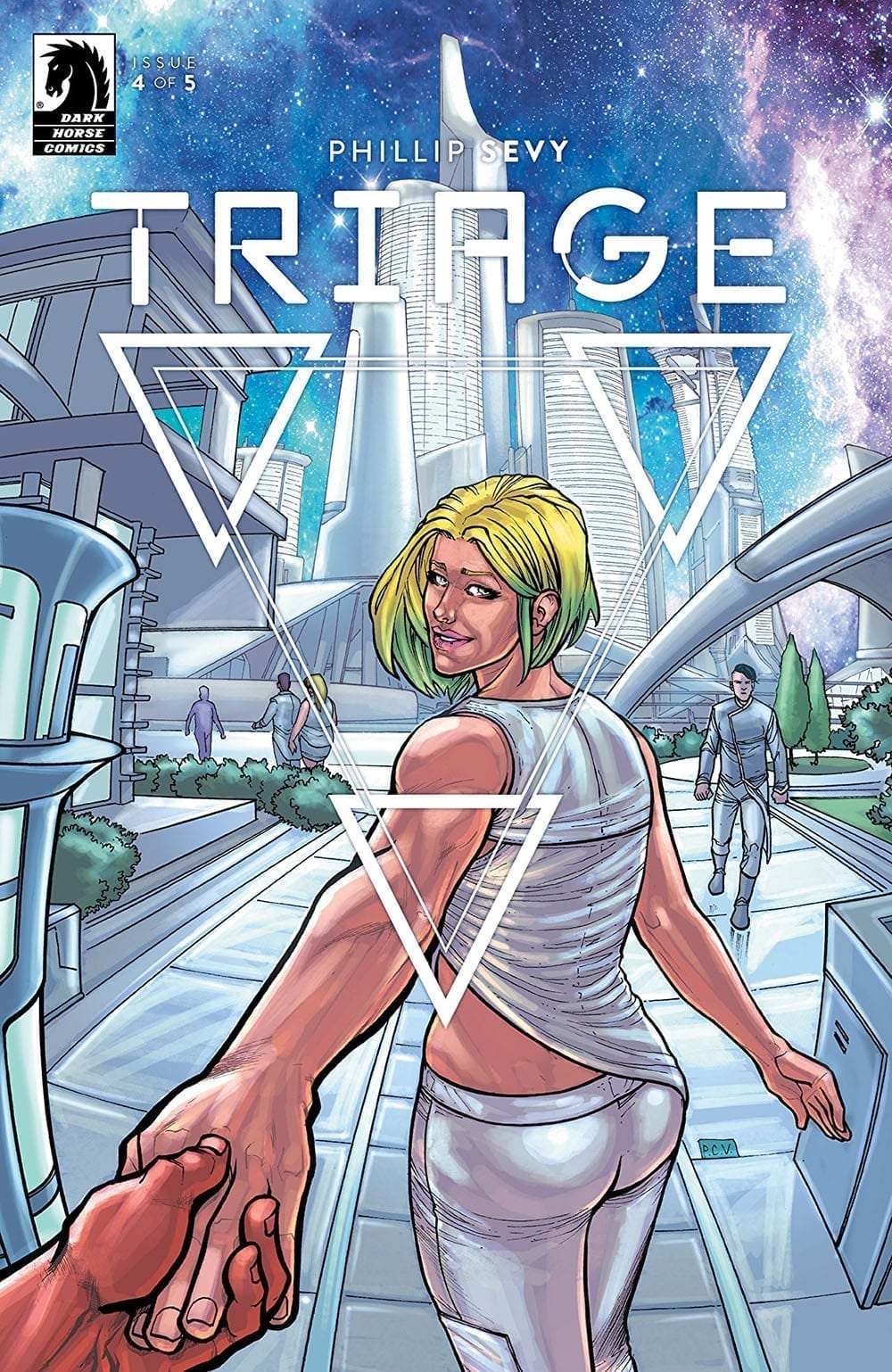 When we left our trio of heroes, Marco had just kissed Tab, Evie’s longtime girlfriend. This added tension to the already fraught situation of being trapped on Marco’s home world. There, the forces of gravity are actively working against human civilization. With the Hunter still in their tail and tensions rising to a boiling point, the trio will have to find common ground and fix the damaged teleporter that Marco wears on her wrist. Without it, there’s nowhere to run from the relentless pursuit of the Hunter.

In our last review of Triage, we commented on the depth of character development. Little did we know, he had barely scratched the surface. Issue four is a punch to the gut for readers emotionally invested in Evie and her alternate versions. We get more backstory on her mother, plus further exploration of her relationship with Tab and reason Tab fell so quickly for Marco. This is a heavy, meaningful issue, but Sevy doesn’t fall into the trap of explaining backstory at the expense of the present. Everything we learn of Evie’s past matters immensely to her current situation, and will have ramifications toward her immediate future. A good writers knows when to hold off on explaining the full backstory of a character, and issue four proves Sevy deserves that title. 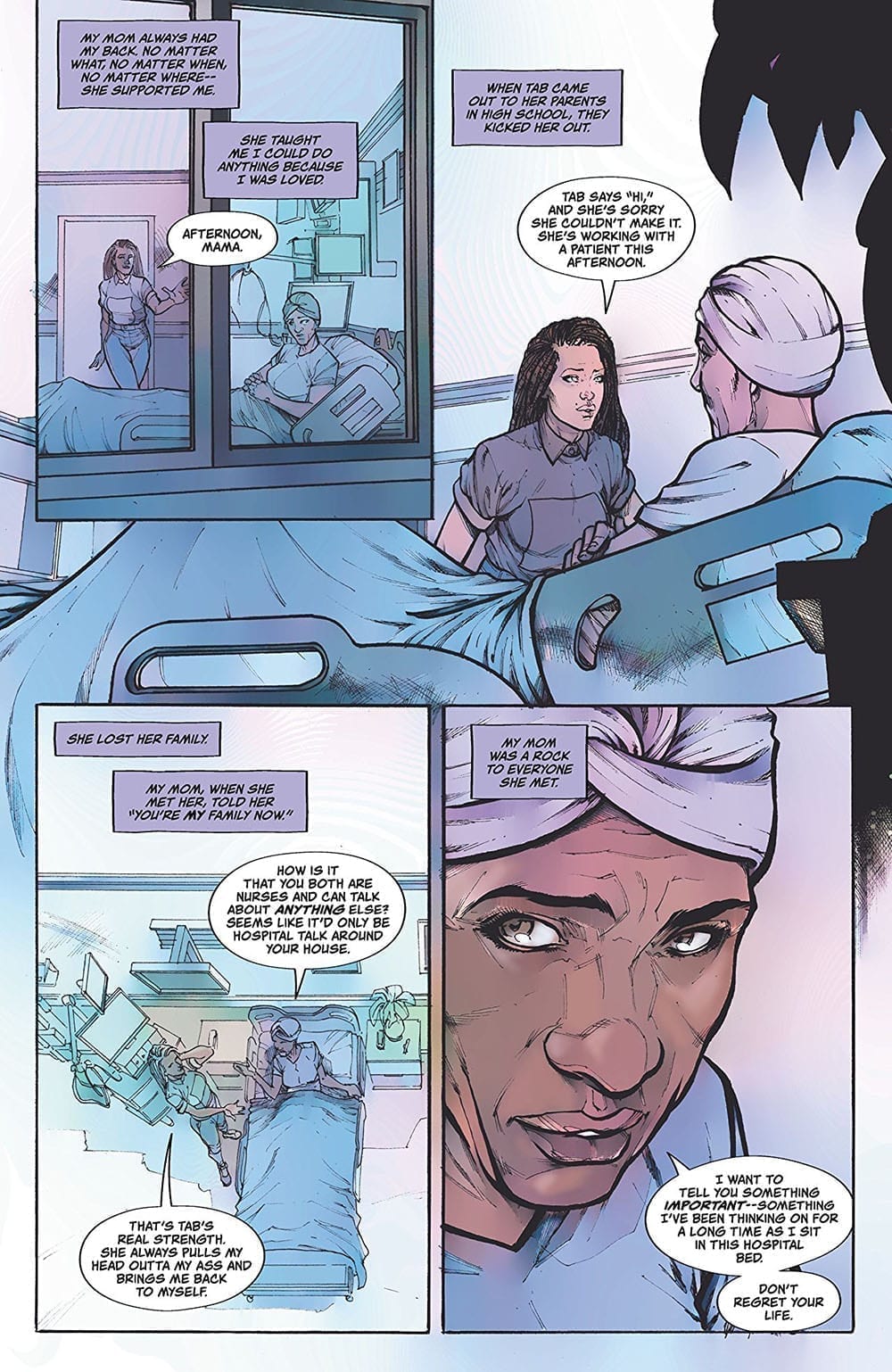 Reading Triage is a little bit like hopping across realities yourself. Triage’s world is built of landscapes that are so wildly different, it can feel like you’re reading two different books from page to page. There’s a danger in science fiction adventure stories for the settings to look too similar, but Sevy actively avoids this problem every time he switches location. After Triage wraps up next month, science fiction comics will have a lot to live up to visually. 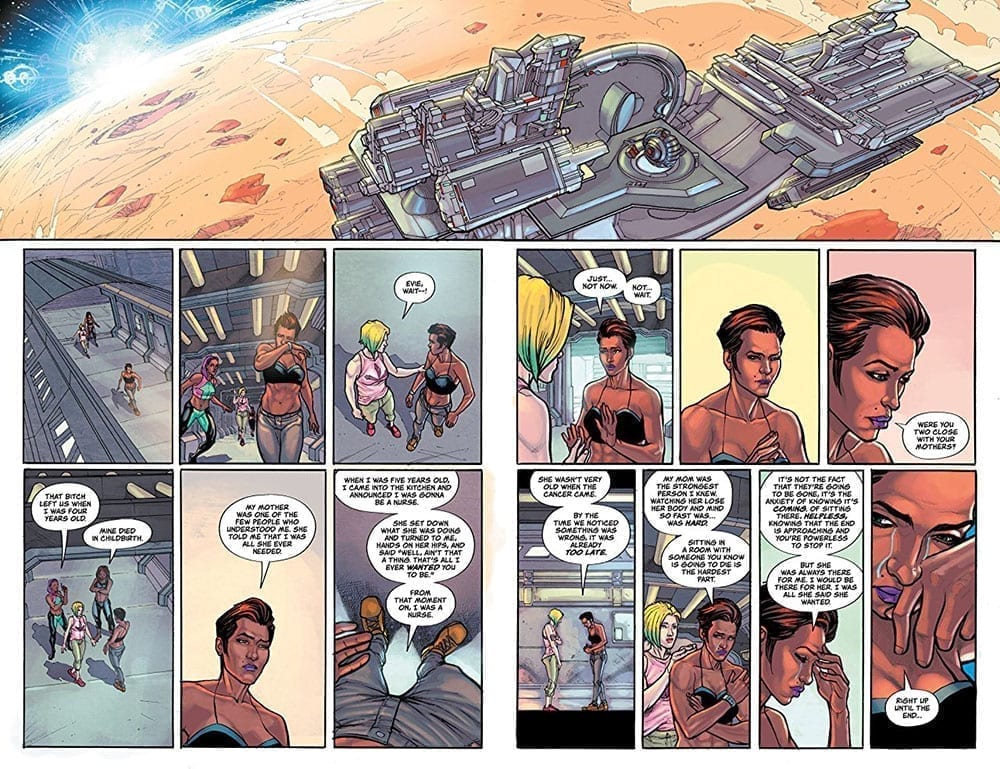 Throughout Triage, letterer Frank Cvetkovic has done a great job bringing sound and voice to Phillip Sevy’s art. From sound effects to narration to important digital text that connects us to the series’ technology, Cvetkovic has immersed the reader in Triage’s strange, alien setting. However, this issue saw Cvetkovic doing a lot of normal dialogue and, unfortunately, it occasionally didn’t come together. Some of the speech bubbles took up a lot of space and contained too little text. The pattern of speech was sometimes hard to follow. Still, this tiny distraction wasn’t enough to draw away from the story or forget about Cvetkovic’s fantastic past work. Plus, issue five promises to be an action-packed final confrontation. Cvetkovic’s sound effects work has every chance to shine again. 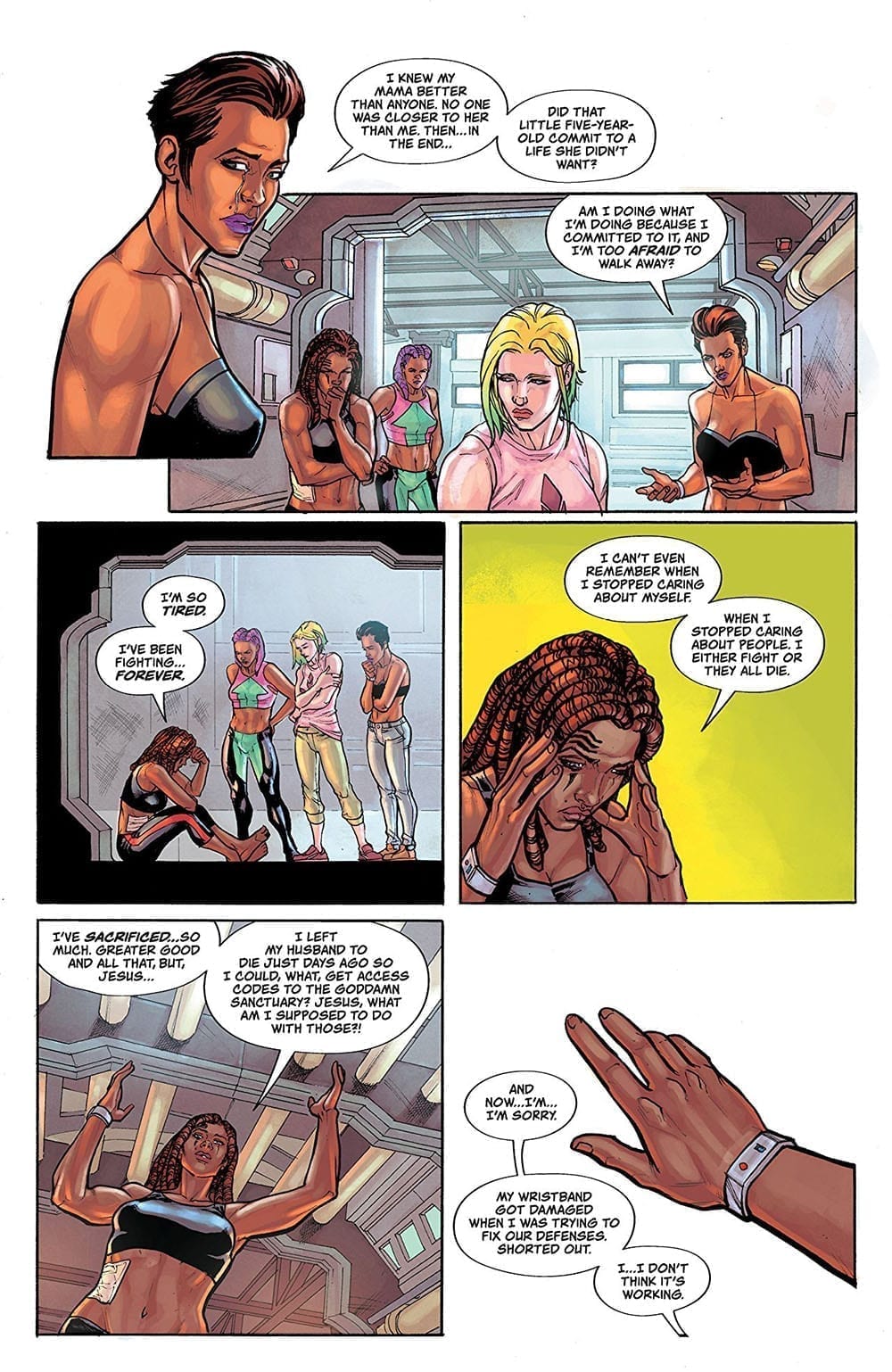 Though it may not be as visually thrilling as the first issue, issue four of Triage is a perfect showcase of what this series can be. The back-and-forth between Evie and her mom, then between Evie and Tab, were extremely powerful. Readers will be hard-pressed not to find themselves connection with these characters; excited to see what happens to them next but dreading the situation in which they find themselves. Pick Triage #4 up now for a penultimate comic done right, but make sure not to jump on with this one. This issue is a rewarding near-conclusion to a fantastic story; make sure you go into it informed. 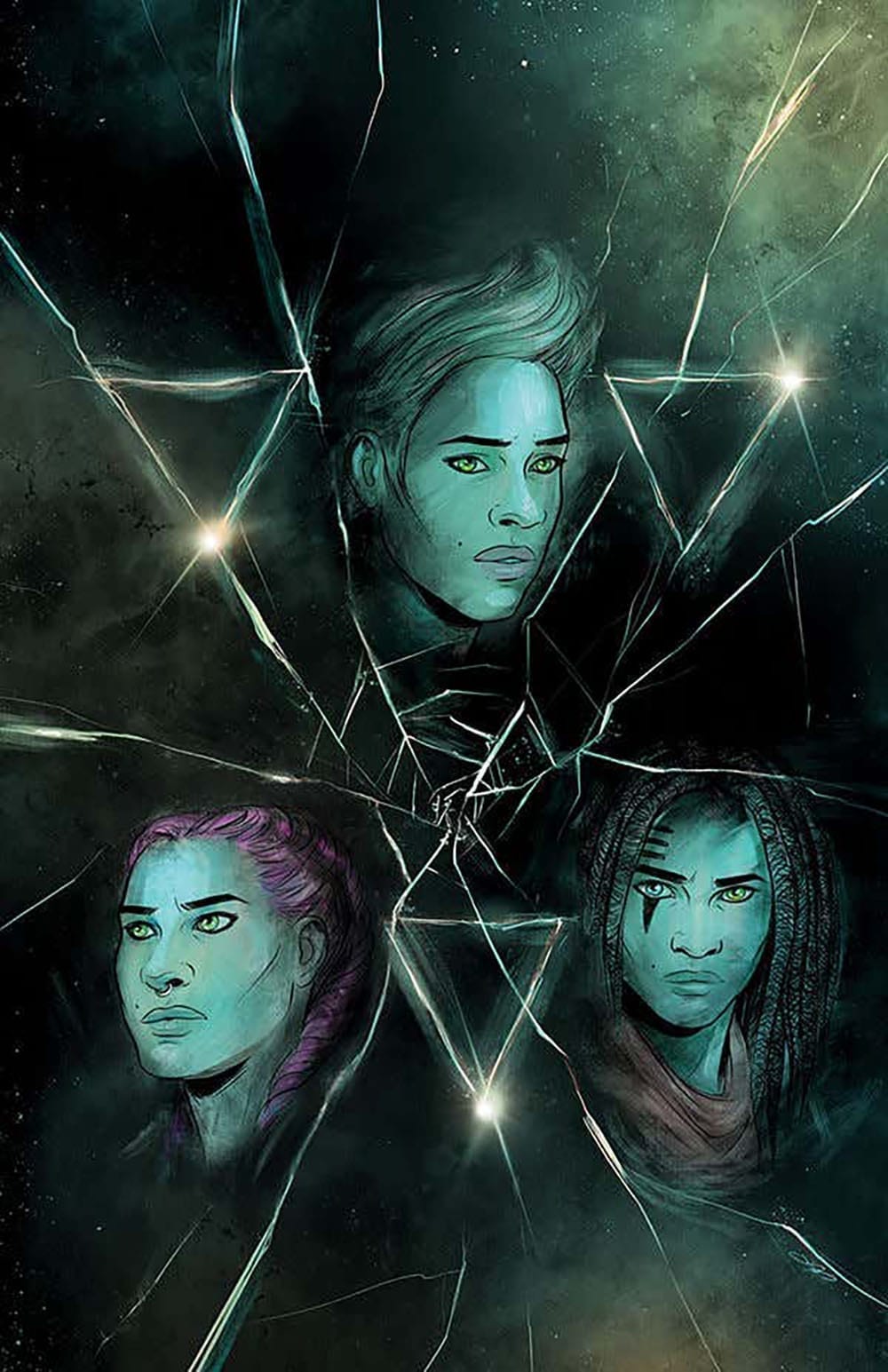 Issue four of Triage is a perfect showcase of what this tense, deeply human science fiction series can be.Review: Triage #4 is an Emotional Punch to the Gut