Review: The Tragedy of Astrid Arkham in DETECTIVE COMICS #1004

The plot thickens in Detective Comics #1004, as we learn Astrid Arkham’s origins, and the root of her hatred for Batman.

As the daughter of Arkham Asylum’s head doctor Jeremiah Arkham, Astrid grew up within the walls of the facility. Seeing the asylum’s inmates as a surrogate family, she learns to hate Batman after learning about a tragedy within her own past. This hatred sets her on her mission to cleanse Gotham of Batman, and bring about the mysterious “Eclipse” she references.

Much of Detective Comics #1004 is occupied by exposition, with Dr. Arkham relaying Astrid’s entire backstory. Dedicating this much time to exposition is a hard trick to pull off well. Tomasi manages to do it, though, delivering another excellent chapter in the story.

We see a young Astrid interact with The Joker, Clayface, and other members of the Batman’s rogue’s gallery. It’s a bit uncanny, to a degree. We see genuine affection for the girl from characters we’re not accustomed to seeing in such an intimate light. Her interactions with these characters in Detective Comics #1004 give motivation to her actions as an adult.

Given the circumstances, she develops a startlingly-reasonable interpretation of the dynamics between Batman and his enemies, only viewed from a completely different perspective. In her view, Batman is not a hero or a protector. Rather, he’s the shadowy monster who comes to spread fear and pain among her adopted family. 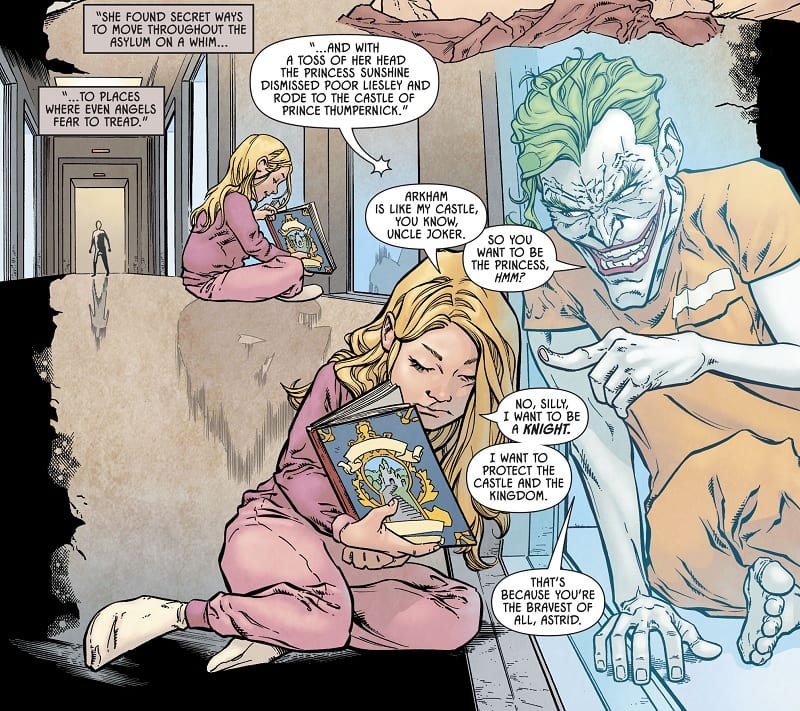 Astrid’s backstory does induce a little bit of chronological confusion. She’s presumed to be around twenty years old at the time of Detective Comics #1004. However, characters present from her first moments like Batman, Harley Quinn, and Poison Ivy don’t seem to have aged at all in that span of time. Of course, there are ways around that matter, as fan speculation meticulously points out.

That point notwithstanding, the writing is strong, establishing pathos and motivation for Astrid’s crusade. It advances the narrative well, and leaves us on the precipice of a climactic showdown.

Bradley Walker’s artwork in Detective Comics #1004 is once again on-point. The sequences illustrating Astrid’s past flow seamlessly across the page without defined panels, giving the work a dreamlike impression that reflects a sequence of interwoven memories. Scrolls of Astrid’s childhood drawings serve as a device to lay out the story, which is a very neat effect.

The way in which Walker draws the flashbacks contrast well with the present-day sequences. He closely-crops many of these images in tight, evenly-spaced, rectangular panels. The end result is a work that feels cohesive, without being dull.

Nathan Fairbarn’s eye for color really shines in the flashback sequences. He bathes the figures in a lot of single hues against the beige backdrop of the scroll, adding to the dreamlike, flashback vibe.

Tomasi and company don’t disappoint on Detective Comics #1004. An excellent chapter in an equally attention-grabbing run.

DETECTIVE COMICS #1004 is a masterclass in how to do exposition well. The storytelling is strong, adding pathos to the story. Of course, it's all backed up by excellent artwork, colors, and lettering. Highly recommended.Review: The Tragedy of Astrid Arkham in DETECTIVE COMICS #1004