Review: THE LEGEND OF KORRA: RUINS OF THE EMPIRE Library Edition – Trading One Villain For Another

While Bryan Konietzko and Michael DiMartino’s creation of The Legend of Korra is an entertaining and impressive feat, it is often considered to pale in comparison to its predecessor in Avatar: The Last Airbender. In that sense, it’s almost fitting that The Legend of Korra: Ruins of the Empire is also a completely entertaining and well-made comic arc that falls short of the standard set in its predecessor, Turf Wars. This story arc focuses more on referencing old characters and reexamining old plot devices than exploring new territory within the Avatar universe. This being said, the character writing is so good it’s almost easy to overlook. With fantastic series-fitting artwork from Michelle Wong, this collected library edition is probably going to be an easy buy for any Korra fan, regardless of its faults.

“To secure lasting peace for the Earth Kingdom, Korra must trust an unlikely ally! On the eve of its first elections, the Earth Kingdom’s future is endangered by its past. As Kuvira works to reclaim her honor, the devious commander Guan undermines the peace Avatar Korra has established to take power for himself. Korra and Kuvira must learn to work together to ensure the future of the Earth Kingdom.” 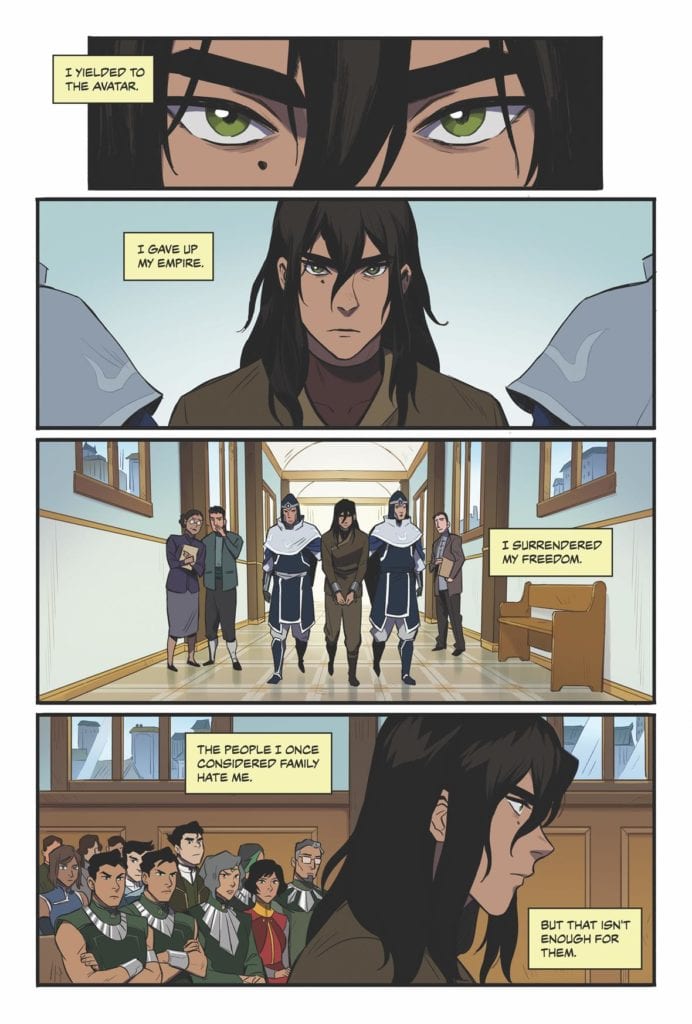 Writers and series creators Brian Konietzko and Michael DiMartino tight pacing, fun dialogue, and engaging character interactions mostly make up for the plot contrivances in Ruins of the Empire. This story arc relies almost entirely on old storylines from the show and the nostalgia they bring along to carry the reading experience. Oddly enough, it actually works for the most part. I’ll be the first to admit that Kuvira is my favorite villain in Korra. She’s easily the most complex, and while her endgame was basically fascism and her methods were merciless, she never felt wholly evil. The turn her character takes is superficially engaging, and what is revealed about her past is tragic. However, the end result of Kuvira’s arc here just doesn’t quite feel earned. There doesn’t seem like enough weight going into her development to make what happens with her mental state believable. There is one daring and tragic moment later in the arc where I was applauding the writers  – making it seem like they were taking Kuvira to the hardest possible right-hand degree – but then they abandon that potential arc in favor of something much safer and more palatable to Kuvira fans. This catering is ultimately this story’s main flaw. While the appearances of old friends, the references to events long past, and the reappearance of the Earth Empire from Korra’s final season do appeal to the fan in me, they were often introduced in a manner that felt forced or unnecessary. The new villain, Commander Guan of the Earth Empire, brings out a new angle with which to observe Kuvira’s character, but in the end he’s a forgettable cut and dry generic villain. One major character that is brought in again briefly acts against type just to fulfill a service that I imagine a lot of fans and readers would find, well, cool. To me however, it was just distracting.

Despite the issues I have with this comic’s plot, it’s still impressive how engaging Konietzko and DiMartino are able to make a story based solely on their characterization and dialogue writing. This is one a major feature of their work that has to be given credit: even when all other elements are faulting, the story is still fun to read. The snappy dialogue, (mostly) clever humor, and tautly-paced scripting of Ruins of the Empire make it an enjoyable comic to experience – even if the plot itself has some inconsistencies. 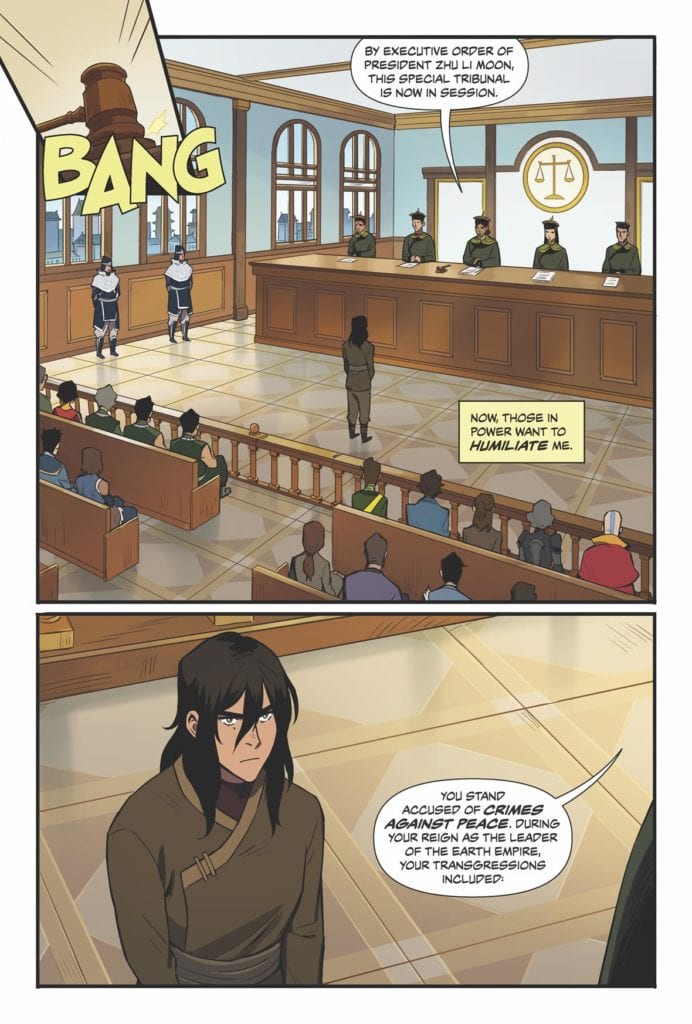 In reality, the major contributor to Ruins of the Empire being so fun to read comes from the outstanding visual work of Michelle Wong’s pencils and Killian Ng’s colors. Their vivid imagining of the world of Legend of Korra isn’t just great by comic art standards, it at times looks like it could be a series of screenshots from the show itself. Wong’s thick lines and elegant details perfectly match both the character and environmental designs first crafted in the animated series, and it’s an aesthetic that is sure to easily reel in fans. She also utilizes a combination of both comic-oriented and cinematic visual direction. The flow of action scenes from panel to panel looks naturally sequential and is exciting to follow. Character-focused scenes have varying wide-angle, close up, and shot/reverse shots that feel like unintrusive camera movements. There are quite a few silent panels that are driven wholly by Wong’s ability to animate character expression, or her ability to choreograph kickass fight scenes. The colors from Killian Ng really bring the Avatar world to life with a palette that is ripped right from the frames of the animated shows. The use of detailed shadows, lighting effects, and shading gives this comic fantastic visual complexity. The art in this series makes it worth the purchase of the oversized Library Edition hardcover on its own. 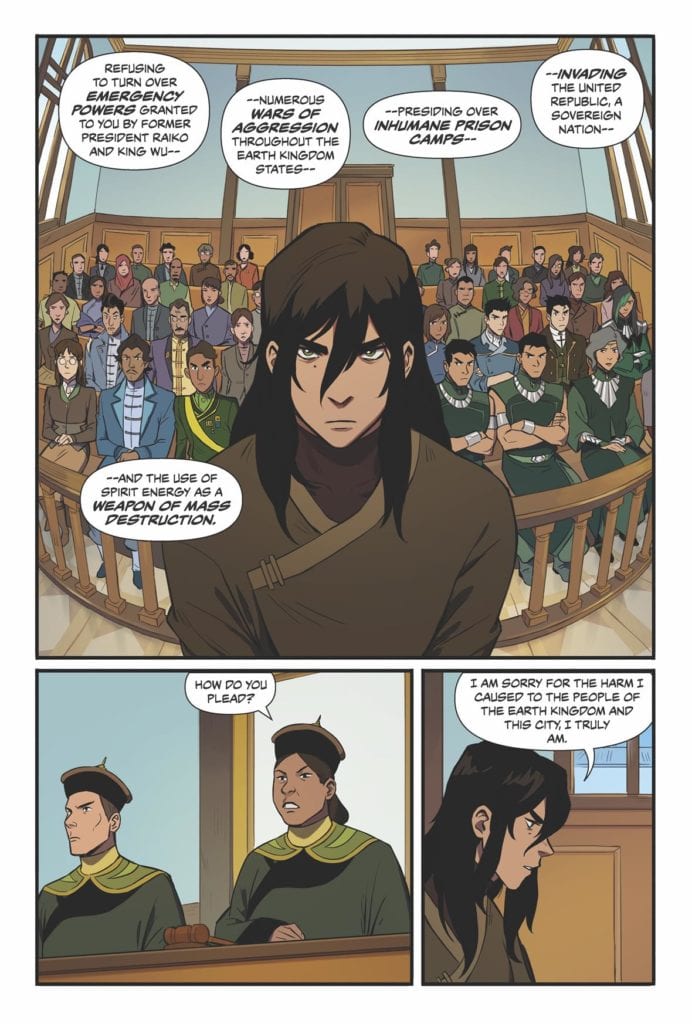 The Legend of Korra: Ruins of the Empire is an entertaining and visually outstanding comic series, with some issues in its plot and characterization. Konietzko and DiMartino’s script manages to be well-paced and fun enough to just barely make the farfetched plot decisions overlookable. Michelle Wong and Kilian Ng’s visual art is energetic and vivid, and is sure to visually satisfy longtime fans. If you’re a diehard fan of The Legend of Korra, then this Library Edition hardcover is likely a must-buy when it comes out on September 9th!

An arc that chooses homages over plot sensibilities, but still comes away as entertaining and beautifully drawn.Review: THE LEGEND OF KORRA: RUINS OF THE EMPIRE Library Edition - Trading One Villain For Another