Review: The Kinmundian Fights Against The Forces Of Armageddon in BATTLEPUG #5

BATTLEPUG #5, available in comic book stores on Wednesday, January 8th, forces the Kinmundian’s nightmares into his reality. The portal to another dimension has been opened by the Queen of the Northland Elves, and she’s unleashed a horrific beast on the group. No one is sure what the villain is planning, but it’s clear one thing is driving her actions: revenge. 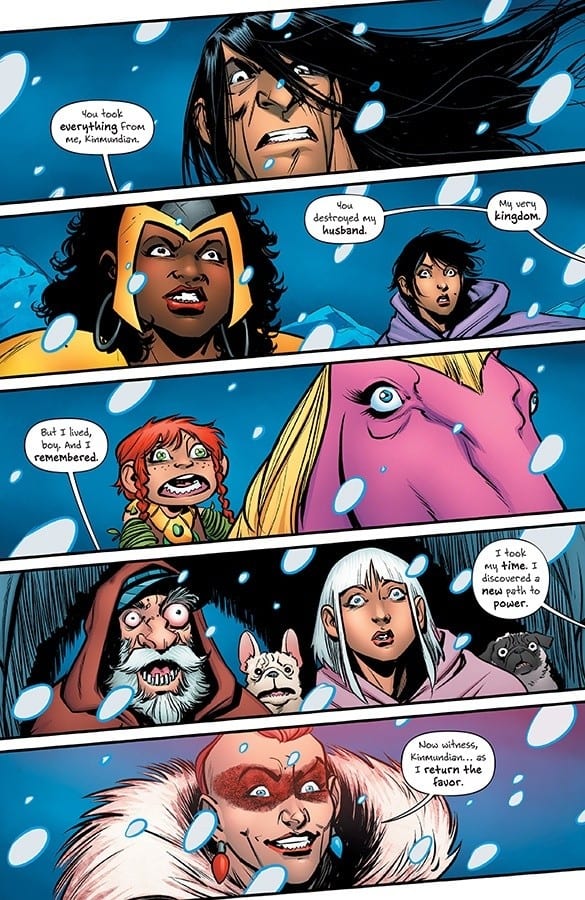 All tensions are high in this climatic scene in the Northland. Even the giant boy, who claims to own Sprinkles, sees the dangers the Queen poses by opening up the dimensional door. As a desperate measure, the boy realizes he must risk his life to close the door. Fortunately, the Kinmundian, Moll, and the others have the same goal in mind.

The allies unleash the full force of their powers on the Queen and the Beast. Bryony uses her plant magic on pumpkin seeds in a creative fashion, Sasha trades blows with the help of her enchanted armor, and Moll, along with the Kinmundian, use their connection to the forces of nature to conjure up a beast of their own.

Mike Norton’s writing captures the desperation in each character, yet balances it with their determination to fight the Queen, her monsters, and whatever else the alternate dimension has in store at all costs. If readers didn’t know it already, this group of misfits are true heroes. The question is: Can the Kinmundian prevent to impending doom the dimensional break poses, or will the images that have haunted his dreams for weeks come to fruition? 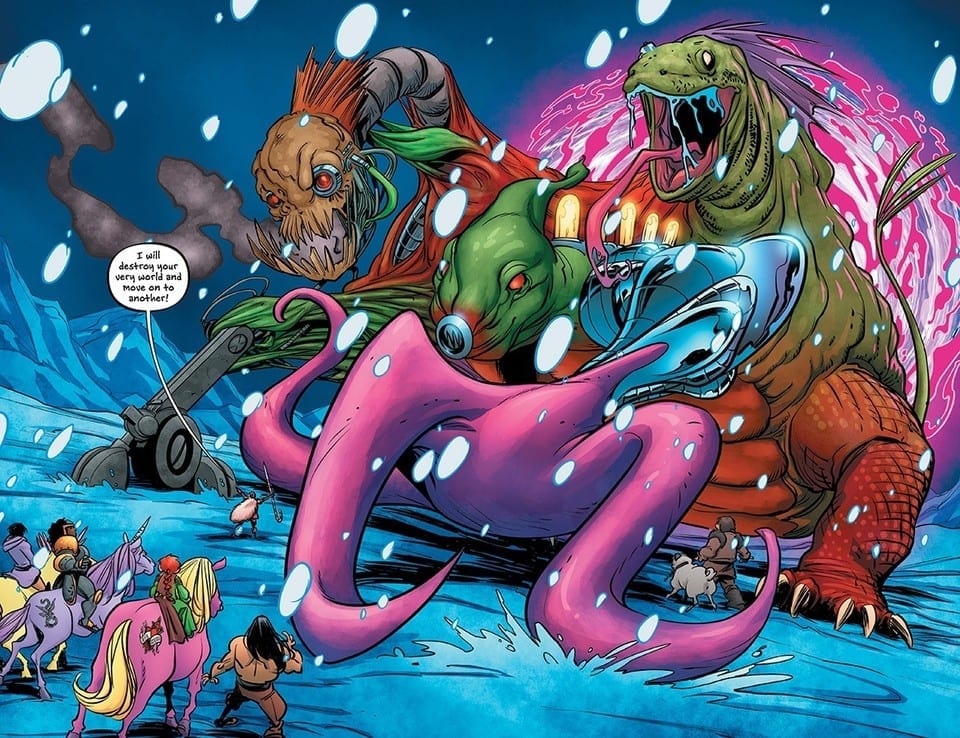 The artwork within this issue contains all the thrills and frills of a multidimensional battle scene. Norton’s penciling and ink work pairs well with Allen Passalaqua’s coloring, In addition, featuring horrific details on the beast and an assortment of colors ranging from one end of the color wheel to the other. And CRANK!’s lettering ties the scenes together with impressive styling of the onomatopoeia sound effects, allowing readers to imagine they have landed right in the middle of this climatic battle.

Norton and Passalaqua’s main cover depicts Sprinkles and the Kinmundian locked in combat with the beast from the alternate dimension. We see the desperate look on our heroes’ faces as they fight a creature far surpassing them in power.

Gene Ha’s unique variant cover gives us an otherworldly version of Sprinkles, as if he was transformed into one of the beings from the dimension door. This effect makes us question the beloved dog’s true origins.

BATTLEPUG #5 is the issue readers have been waiting for since the plot’s unveiling in issue #1. We finally see the Kinmundian’s nightmares come to life, and the fate of the world lies in the balance. We’re anxious to find out how this all turns out!

Do you think the Kinmundian and Sprinkles will be able to reach the other dimension? Let us know in the comments below!

Review: The Kinmundian Fights Against The Forces Of Armageddon in BATTLEPUG #5Mike Norton's writing captures the desperation in each character, yet balances it with their determination to fight the Queen, her monsters, and whatever else the alternate dimension has in store at all costs. If readers didn't know it already, this group of misfits are true heroes.