Review: The Horrors Of President And Country Revealed In THE MASK: I PLEDGE ALLEGIANCE TO THE MASK #4

The final presidential vote is tallied in THE MASK: I PLEDGE ALLEGIANCE TO THE MASK #4, available in comic book stores on Wednesday, January 22nd. Abner Mead, the slimy politician who bonded with Big Head three issues ago, is the newly elected President of the United States of America. But who’s in control: Big Head, or Mead? Either way, the people must live with a leader hell-bent on upending the very foundations of our society.

The news of Big Head/Mead’s inauguration is making its rounds across the country. Vast swaths of people are either elated or horrified—those in the middle are few and far between. But unbeknownst to any group is the internal monologue occurring between the two “Presidents.” It’s here we learn that Big Head is looking to become even more radical during his administration, and Mead may not be the right man for his job.

Pushing Mead to the wayside, Big Head attends to his inaugural duties with the pomp and frills of King George from Hamilton. The people see what kind of person they’ve elected, and if they had any doubts, his first speech makes his intentions quite clear. 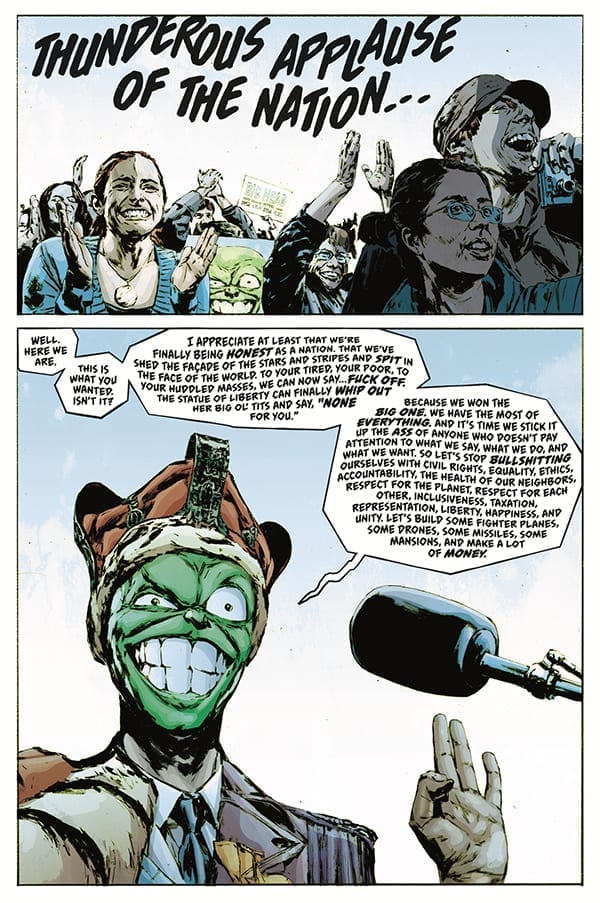 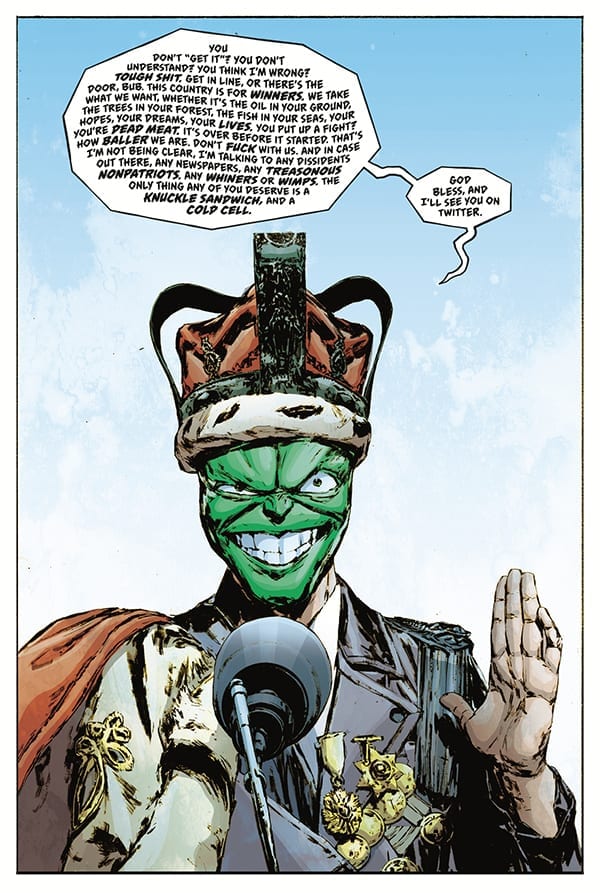 Christopher Cantwell’s writing echoes an all-too familiar sense of dread many feel in the political climate of the past few years. It’s an anxiety that’s never quite abated, despite attempts to rationalize what direction our country has moved in. In a hauntingly beautiful move, Cantwell casts these fears onto the insane Big Head.

But there is a resistance forming in response to the despot. Previous wearers of the Mask, including Mayor Kathy Matthews and Detective Mitch Kellaway, are experiencing some weird visions about The Mask. They know his days are numbered and will do anything to bring an end to his reign. 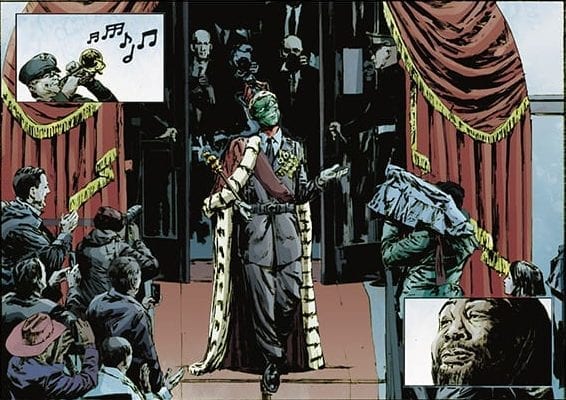 Patric Reynolds’s artwork for this issue completes the masterpiece that is this issue. Combined with the coloring talents of Lee Loughridge, this book magically blends the realistic depictions of Inauguration Day in Washington D.C. with the cartoony Big Head. The style reflects the surprising circumstances that all too often infect our political landscape.

What drives home the issue’s message, however, is Nate Piekos’s lettering. In the midst of the traditional ceremony, readers are treated to Big Head’s off-kilter speech, represented by the slanted fonts. We know this being is a disruption in the system, but not to what extent.

Reynolds’s main cover gives readers a clear message: the world is full of The Mask. Each person represented is fully embodied version of the anti-hero.

THE MASK: I PLEDGE ALLEGIANCE TO THE MASK #4 wraps up this story beautifully. There’s just enough closure, but leaves enough mystery to wonder where the iconic characters will end up.

Do you think there’s a potential for a spin-off from this series? Let us know in the comments below!

Patric Reynolds's artwork for this issue completes the masterpiece that is this issue. Combined with the coloring talents of Lee Loughridge, this book magically blends the realistic depictions of Inauguration Day in Washington D.C. with the cartoony Big Head.Review: The Horrors Of President And Country Revealed In THE MASK: I PLEDGE ALLEGIANCE TO THE MASK #4