The story arc that began as a refocusing endeavor on Hal Jordan’s life culminates with a climatic battle between the Green Lantern and his anti-self: the Qwa-Man. This being from the anti-matter universe is literally the antithesis to Hal, and he’s hellbent on destroying the rest of the multiverse. Joined by a relatively small team of Lanterns, our hero leads the final charge against this seemingly unstoppable force in THE GREEN LANTERN #12, available in stores Wednesday, October 2nd. 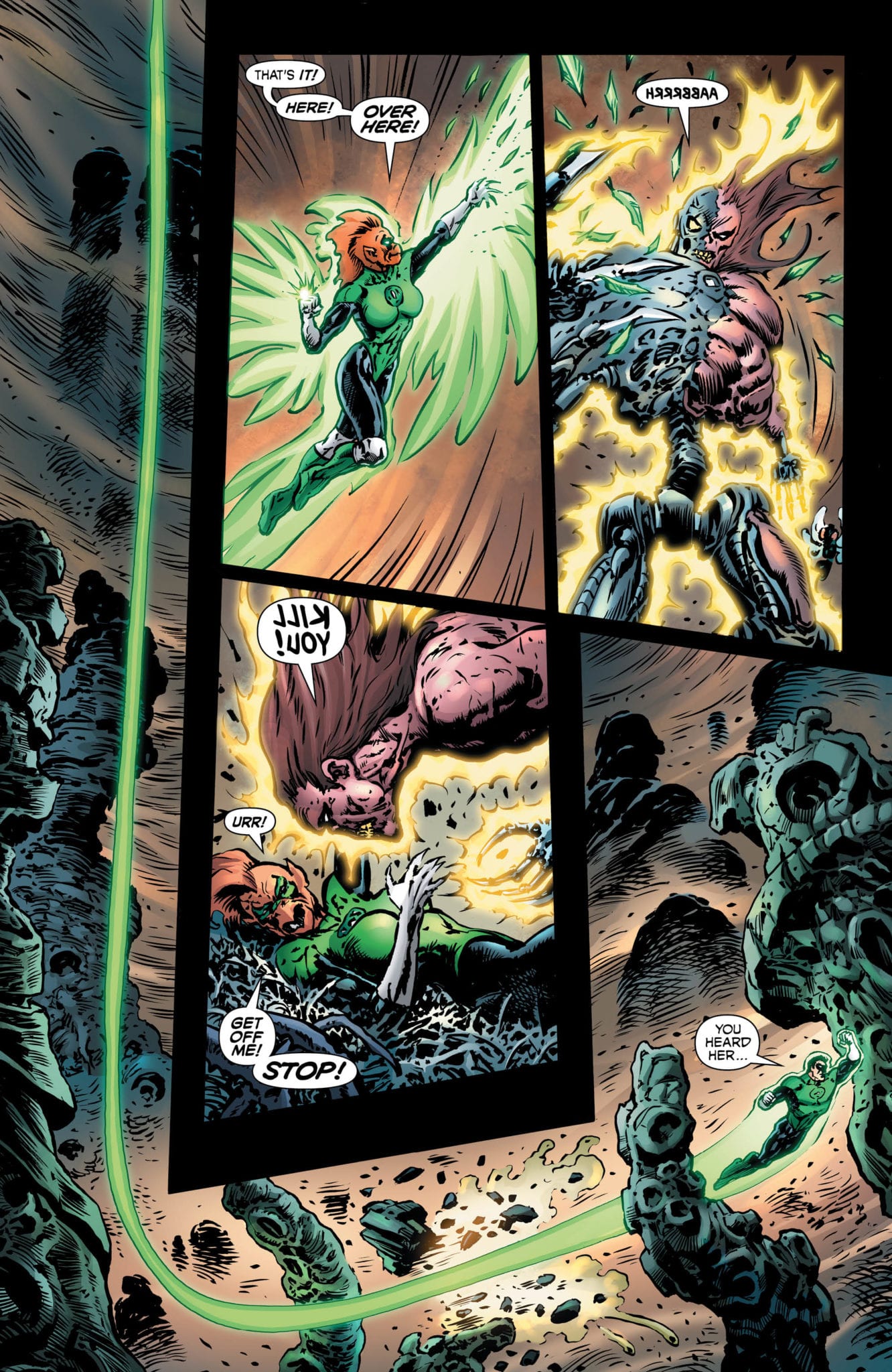 Sometimes the most unexpected things happen when one’s least expecting it—in Hal’s case, this saying may as well have hit him in the face. Just as he was about to be defeated by the Qwa-Man, a yellow light guided by the villain Sinestro enveloped the fiend and tossed him aside. Confused and disoriented, Hal wonders why one of his worst enemies would save his life, soon realizing that this version of Sinestro is the opposite/good counterpart of the villain from his own universe.

But this “good” version of Sinestro isn’t all he’s cracked up to be. In fact, the Yellow Lantern reveals he was paid to release the Qwa-Man upon the positive matter universe. Fortunately, the being behind it all—the one who generated all of this anti-matter chaos in Hal’s world—is revealed within the concluding pages of the story.

With this being the last issue of Grant Morrison’s current run in the series, it makes sense that he and his team would spend time a large portion of the story tying up loose ends. Some authors do this in rushed or forceful way, but Morrison ties them up like a bow. Readers get to see characters they might have forgotten about arrive on the scene to play their part, and the highly anticipated battle with the Qwa-Man does not disappoint. We find questions answered and many more posed to us as the creative team brings this saga to its thrilling conclusion.

The artwork within this edition of THE GREEN LANTERN is amazing as always; just when you think Liam Sharp’s penciling and Steve Oliff’s coloring could get any better, they find a way to continually astound readers. The chaos of the Qwa-Man and the anti-matter forces alongside him seem to warp the fabric of spacetime around the Lanterns, seemingly extinguishing their green light. What’s more, Tom Orzechowski’s dialogue boxes seem to be affected as well, transforming into various asymmetrical shapes as if being pulled every which way by the anti-matter.

Sharp and Romulo Fajardo Jr.’s main cover art features Hal and Qwa-Man, locked in an intense battle. We also see an image of Controller Mu serving as a backdrop, representing his ongoing influence in the Lantern’s life.

Riley Rossmo’s variant cover depicts a rotting, zombified version of Hal, which serves as a creative fusion of the hero and his anti-matter counterpart.

THE GREEN LANTERN #12 concludes this story arc in the best way possible, offering a satisfying confusion while opening up the narrative into an exciting new direction.

What did you think of Hal’s confrontation with the Qwa-Man? Let us know in the comments below!

Review: Hal Jordan Fights His Evil Counterpart in THE GREEN LANTERN #12With this being the last issue of Grant Morrison's current run in the series, it makes sense that he and his team would spend time a large portion of the story tying up loose ends. Some authors do this in rushed or forceful way, but Morrison ties them up like a bow.