From writer LJ Duey and artist Paulo Mel comes a comic following a delightfully deviant sorceress-turned contract killer in We Wicked Ones #1. Featuring colors by Ander Zarate and lettering from Crank!, this debut issue from Scout Comics offers a unique take on magic in the world of superheroes and a distinct look at morality through the eyes of the protagonist. With a darkly clever script and outstanding visual work, this new series is a stellar way to start reading comics in the new year.

“After being orphaned in a mass witch burning orchestrated by the US government, Celia Jordan grew up to be Washington DC’s darkest secret-she’s now wreaks havoc as the city’s resident witch… and its most sought-after contract killer. When a politician hires her to kill a beloved and powerful superhero, Celia hesitates, but not for long. No one has been able to catch her yet – why would they now?” 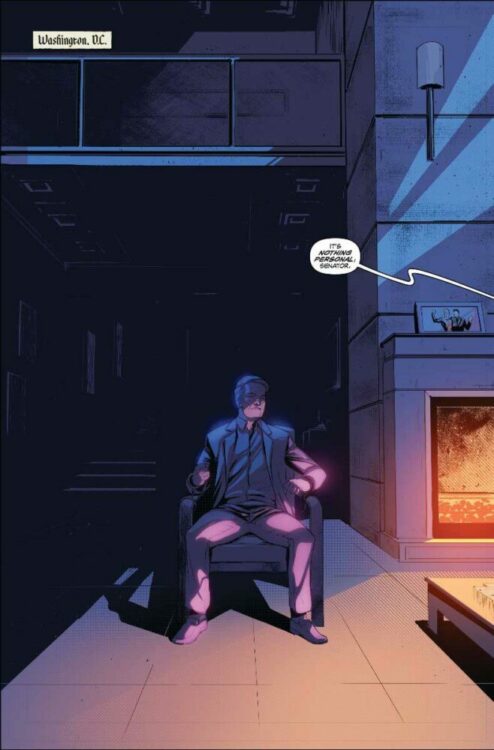 LJ Duey introduces readers to one of the most easily likable new protagonists of 2023 so far with Celia Jordan in We Wicked Ones #1. One of the few survivors of a government-mandated witch hunt, Celia now works as an amoral spellcasting assassin for-hire. Her new life – making herself an invaluable asset to the very people who would otherwise see her dead – seems to be working out for her. The wrinkles start to arise when she’s asked to kill one of the only public beings who stood up for her kind before they were massacred. With this twist of inner turmoil, the story truly begins. Celia’s unceasing snark makes her a joy to read, and that attitude bleeds into the comic’s overhead narrative. This makes it all the more striking when that attitude breaks. Getting into Celia’s head, learning about her past, and seeing what attachments she currently has adds a surprise amount of weight to the story, and makes readers genuinely concerned for Celia and the life she has chosen. What starts out as a magic and snide comment-filled classy assassin story quickly turns into a deeply human quiz on morality. Duey’s script bounces along at an even pace, flitting between Celia’s endlessly entertaining dialogue and her attitude-inflected inner monologue while keeping up with the many happenings in the chapter itself. A lot happens in this opening chapter, what with Celia’s marks and meeting with clients while also getting her backstory and meeting with some of those closest to her. Duey’s script handles all of this in stride, making for a smooth and constantly entertaining reading experience. 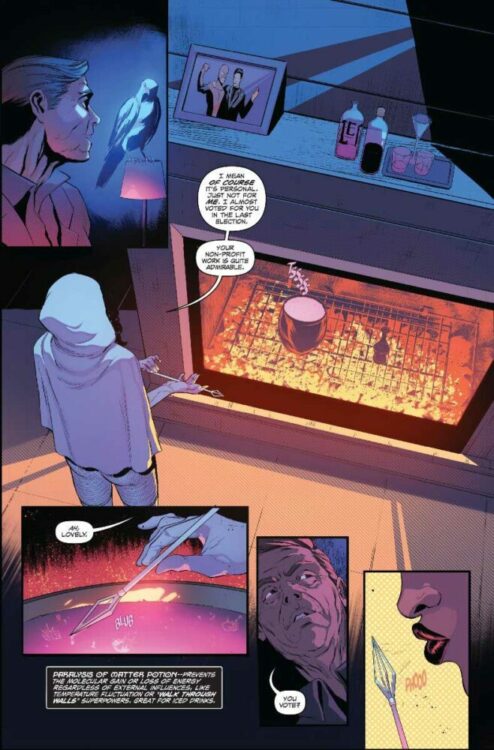 Duey is joined by the artistic talent of Paulo Mel to bring visual life to We Wicked Ones #1, and the results are stunning. Mel’s striking character animations and detailed backgrounds pull the reader in with effortless ease. Each character looks distinct, and their range of facial expressions are completely unique from one another. Mel’s sequential direction nails the pacing, with panel sequencing that holds its focuses perfectly and moves the story along at a natural pace. The conversational sequences get just the right amount of attention without ever bogging down the story, and the action is appropriately breakneck. Mel’s sharp, thin linework is given life by Ander Zarate’s vivid colors, The color art seals the comic’s tone with deep, “magical” feeling hues that give of a very distinct vibe. Every page here has that RGB-esque purple and pink glow about it – what the kids call “bisexual lighting.” Zarate’s warm and stunning use of color keeps readers wrapped up in every page. The lettering from Crank! rounds out the experience with dynamic font changes that nail the tone in every interaction. The SFX lettering is a real gem here, with tiny lettering moments adding the perfect punctuation to Celia casting a spell – all for it to flip over into a booming piece when the action picks up. The letters never steal thew show, but work to sell the noise and tone of every page. Overall, We Wicked Ones is off to a gorgeous start with a fantastic visual team. 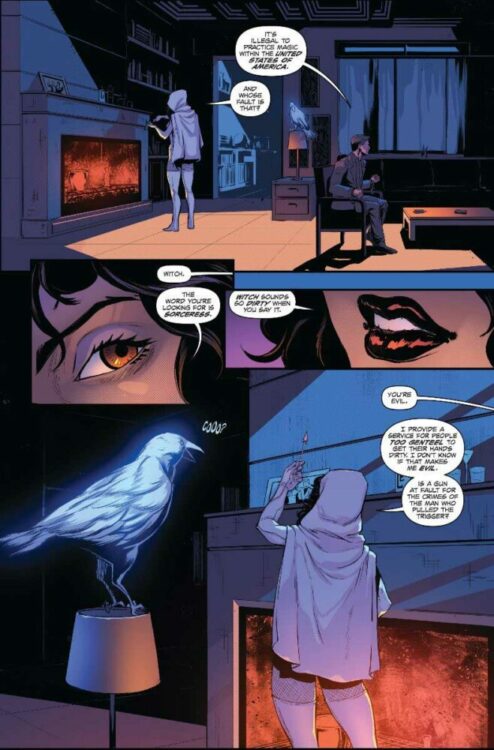 We Wicked Ones #1 is an outstanding start to this new series from Scout Comics. LJ Duey’s script is clever and full of attitude, with a protagonist that is as fun as she is morally compelling. The visual work from Paulo Mel and Ander Zarate is gorgeous and full of detail, bringing this world of magical assassinations and superheroes to life with unique effect. Be sure to grab this newest release when it hits shelves on March 8th!

A wonderfully devious and conflicting start, We Wicked Ones #1 is a brilliant opening chapter to begin your comic reads for the new year. Review: The Evils of the World Shine Bright in WE WICKED ONES #1