Review: THE BABOON Is The All-Ages Adventure Comic You’ve Been Waiting For

Jamie Jones’ The Baboon: The Mustelid Menace is now available to the public following its successful Kickstarter campaign, and it’s the perfect, action-packed comic for fans of Saturday morning adventure cartoons like Johnny Quest.

The graphic novel is written and illustrated entirely by Jones, whose previous work includes Kicking Ice, A Constant Distraction, and his own anthology comic The Whisper. The Baboon is Jones’ first comic as a full blown cartoonist.

Barton Marlow is the Baboon, a swashbuckling adventurer “who will stop at nothing to defend the world from the greatest evils known to man.” In “The Mustelid Menace”, Babs and his crew travel to a dark and dangerous castle to retrieve the mysterious Jackal formula from the nefarious Professor Weezal. 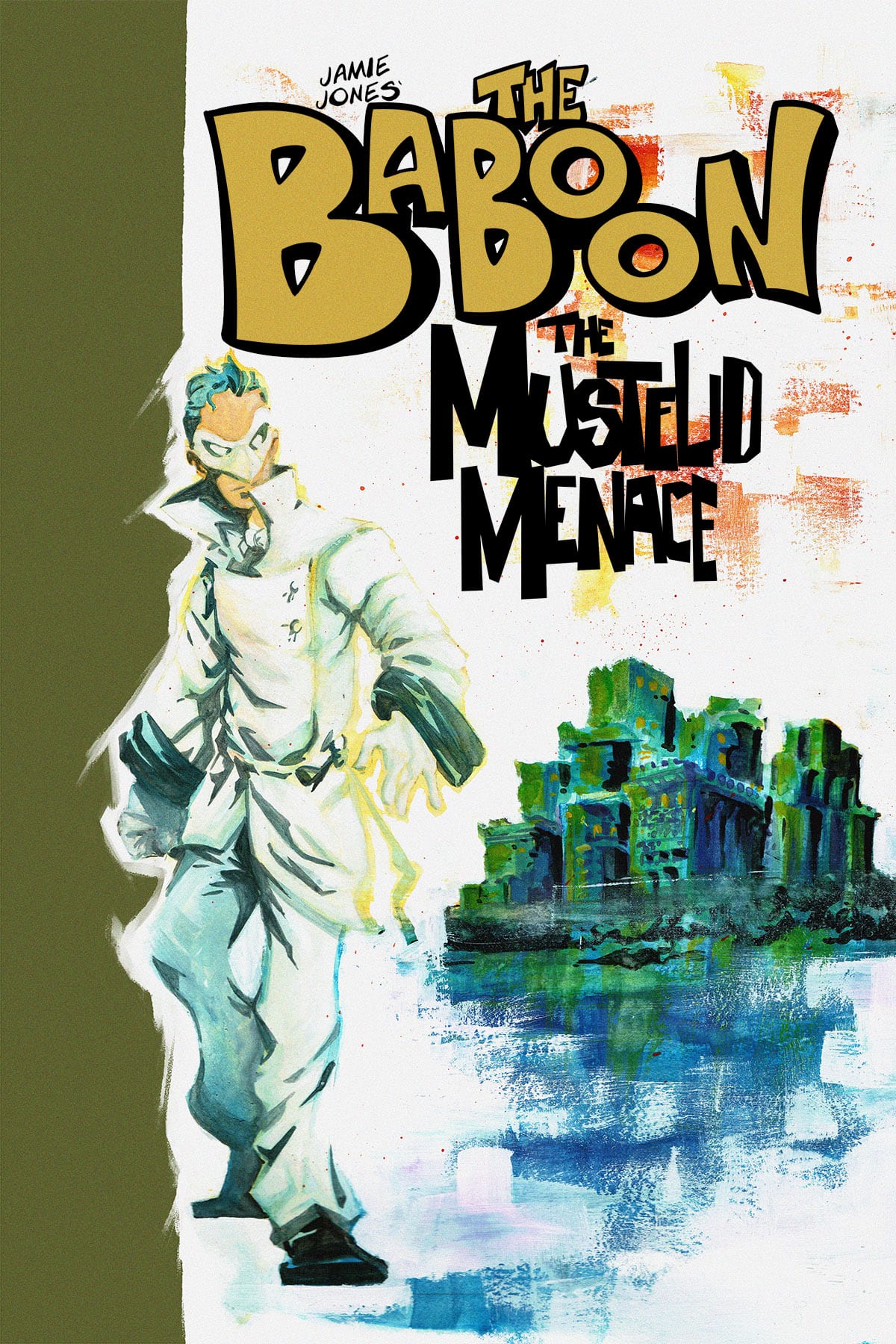 Jones created The Baboon as an homage to classic Hanna-Barbera adventure cartoons, and he 100% captures the spirit of those shows in this comic. You can almost hear the booming voice of a narrator as you’re reading: “Will the Baboon make it out of Castle Mustelid in one piece? What plans does Professor Weezal have with the Jackal formula? Find out next week, same time, same channel!” But then you’re overjoyed because you don’t have to wait until next week; you just have to turn the page.

This is a FUN comic. It’s got the snap, crackle, and pop of a sugary cereal that you should be eating while you read it. It’s got enough action, excitement, and humor to fill your tank and keep you reading; you’ll knock this bad boy out in a single sitting and immediately start it over again. 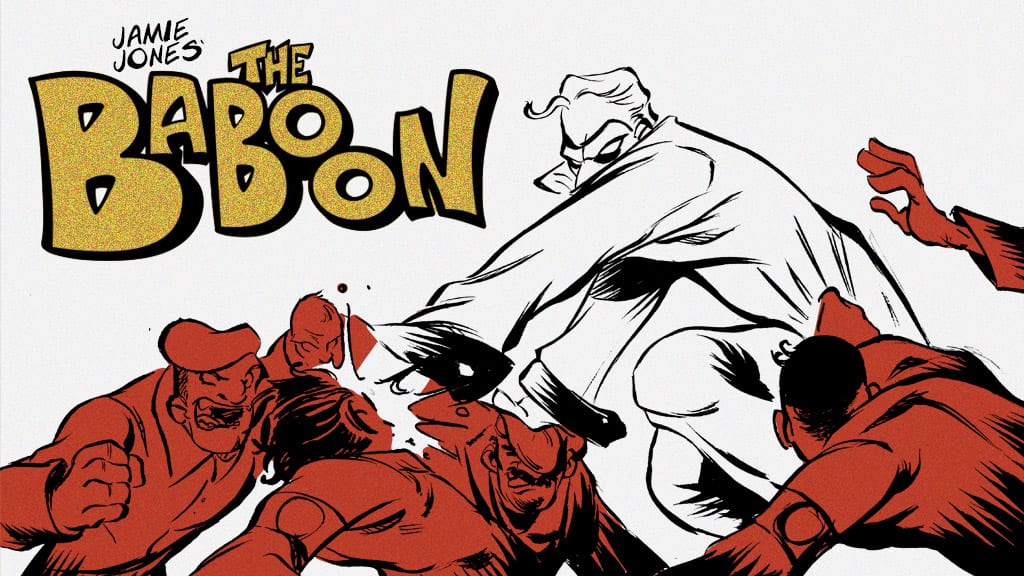 Jones’ art is The Baboon’s greatest strength. His cartoony style is big and exaggerated. It’s got tons of energy and motion that really helps sell the action sequences. The colors are vibrant and striking; Jones uses a lot of solid colors and switches them up often for emphasis. There’s a unique and special quality to the art. The cartoonist definitely wears his influences on his sleeve (Jones is a big fan of Eric Powell, and you can see that in this work), but at the same time it looks like nothing else on the market.

A card-carrying cartoonist can tell a story with his or her art alone. You should be able to take the dialogue and still follow the story and feel what the artist wants you to feel. Jones has already mastered that skill. The setting perfectly establishes the tone and atmosphere by itself. Castle Mustelid is a dark and gloomy place where danger lurks around every corner. Turn to any page and you feel that in your gut. It generates this feeling of suspense. Then, Jones delivers the emotion in the characters’ faces. You feel what they feel: the excitement, the fear, and the love. 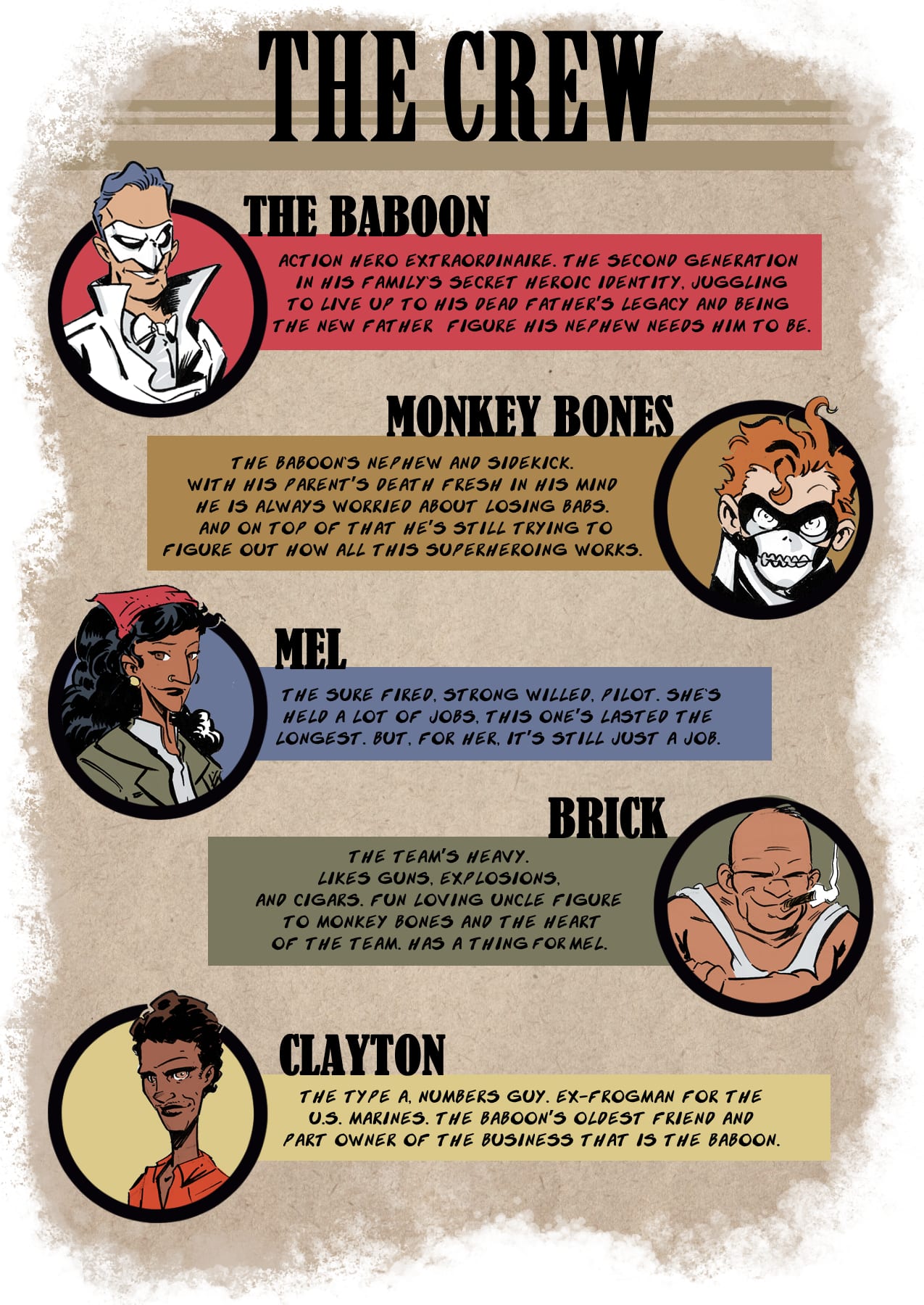 And on that note, if the art is the number one reason to pick up The Baboon, then the characters are number two. The story is a pretty simple and straightforward adventure, but it has a ton of heart and soul courtesy of this cast. The Baboon crew feels like a real family. Their love for one another is palpable, but they also bicker and argue in a relatable way. Their relationship feels authentic. Each one of them has their own voice and personality, but perhaps the standout crew member, other than the Baboon himself, is Babs’ sidekick Monkey Bones. The young boy’s sense of wonder and enthusiasm is so earnest that you immediately connect with him as a reader. Chances are, if you’re seeking out self-published adventure comics, you’ll see yourself in Monkey Bones. He’s a reminder of why we love comics and adventure stories in the first place. Plus, come on, “Monkey Bones” is a pretty badass codename for a preteen sidekick.

Jamie Jones came out swinging with his first full comic as a cartoonist. The Baboon: The Mustelid Menace is an all-around good time that you can enjoy on your own or share with your kids, and we don’t get too many of those all-ages comics these days. Cartoonist Kayfabe co-host and X-Men: Grand Design writer/artist Ed Piskor says Jones has “got [cartooning] figured it out already” — see why for yourself.

You can buy THE BABOON: THE MUSTELID MENACE right now by clicking here, as well as the new, super-limited edition Baboon mini-comic “One Night Only”.

Read the first five pages of THE BABOON: 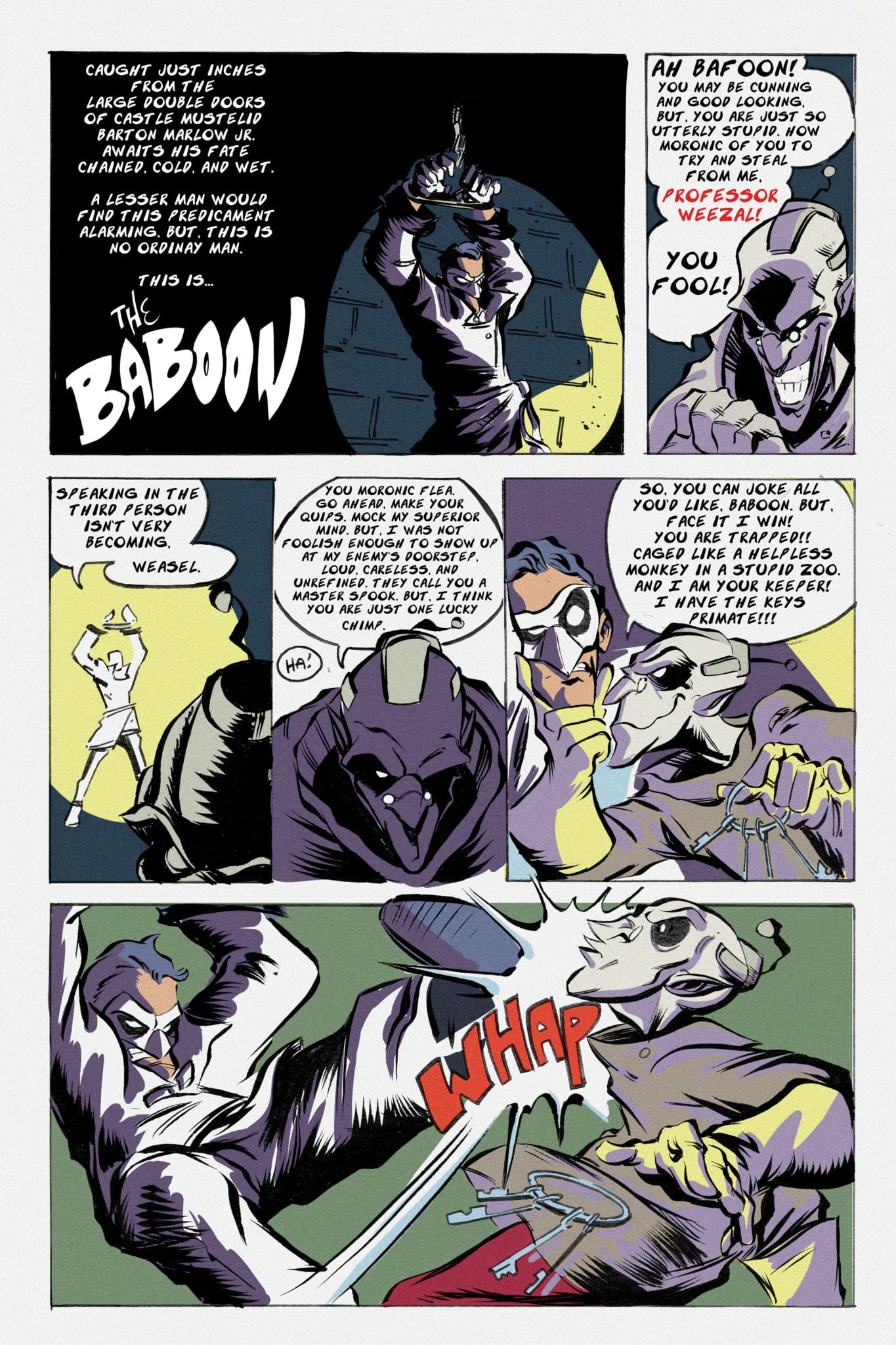 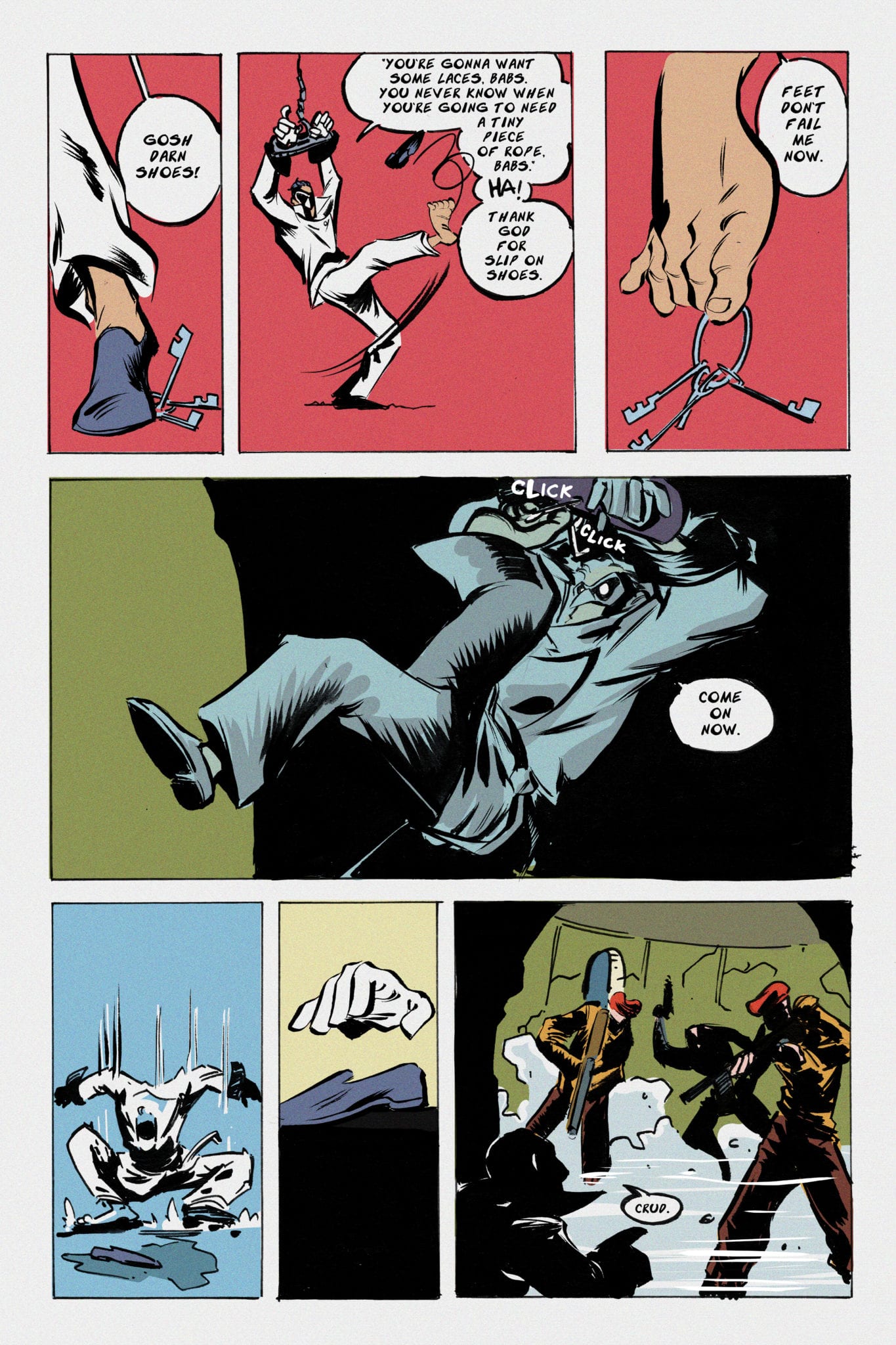 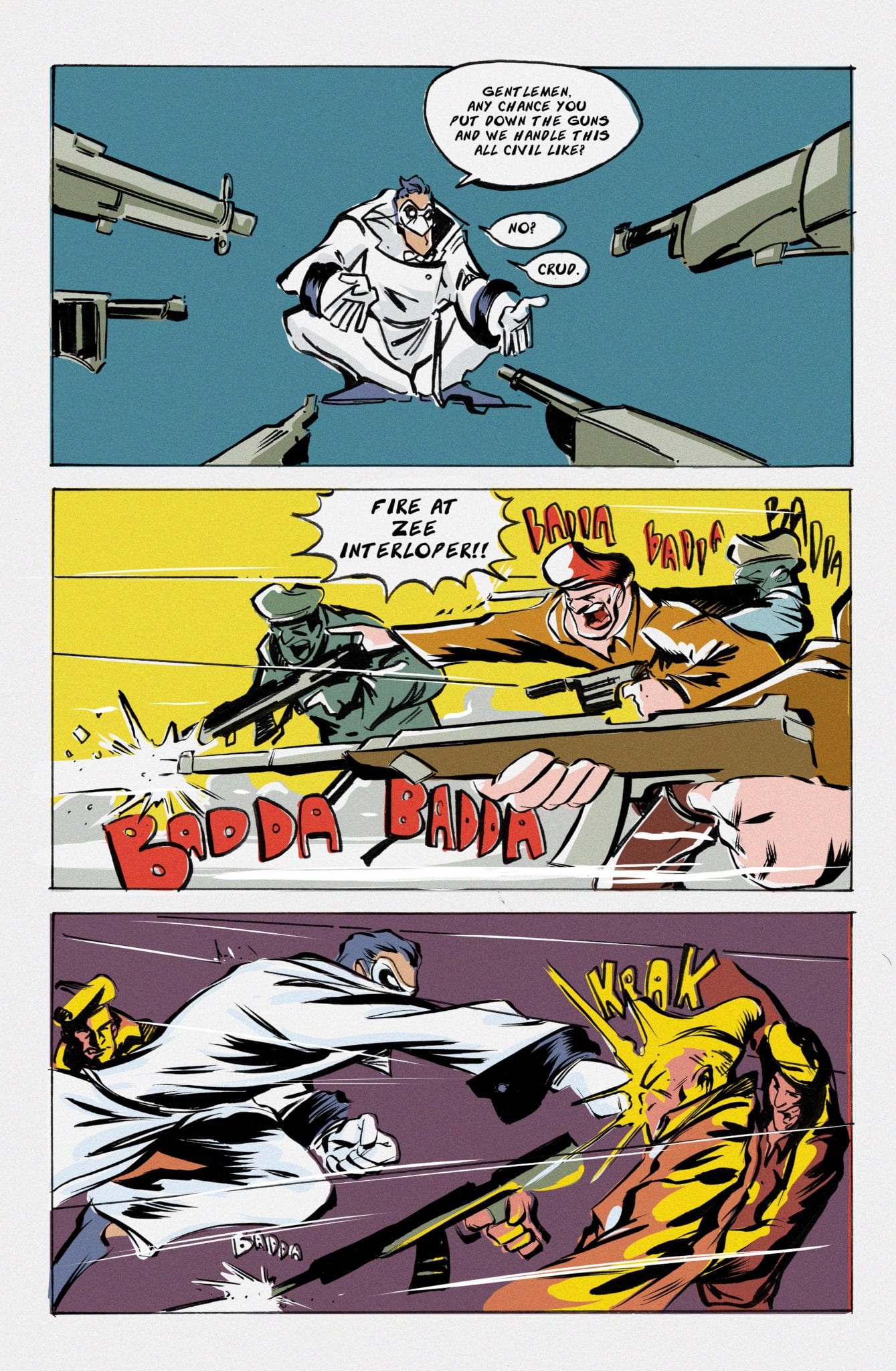 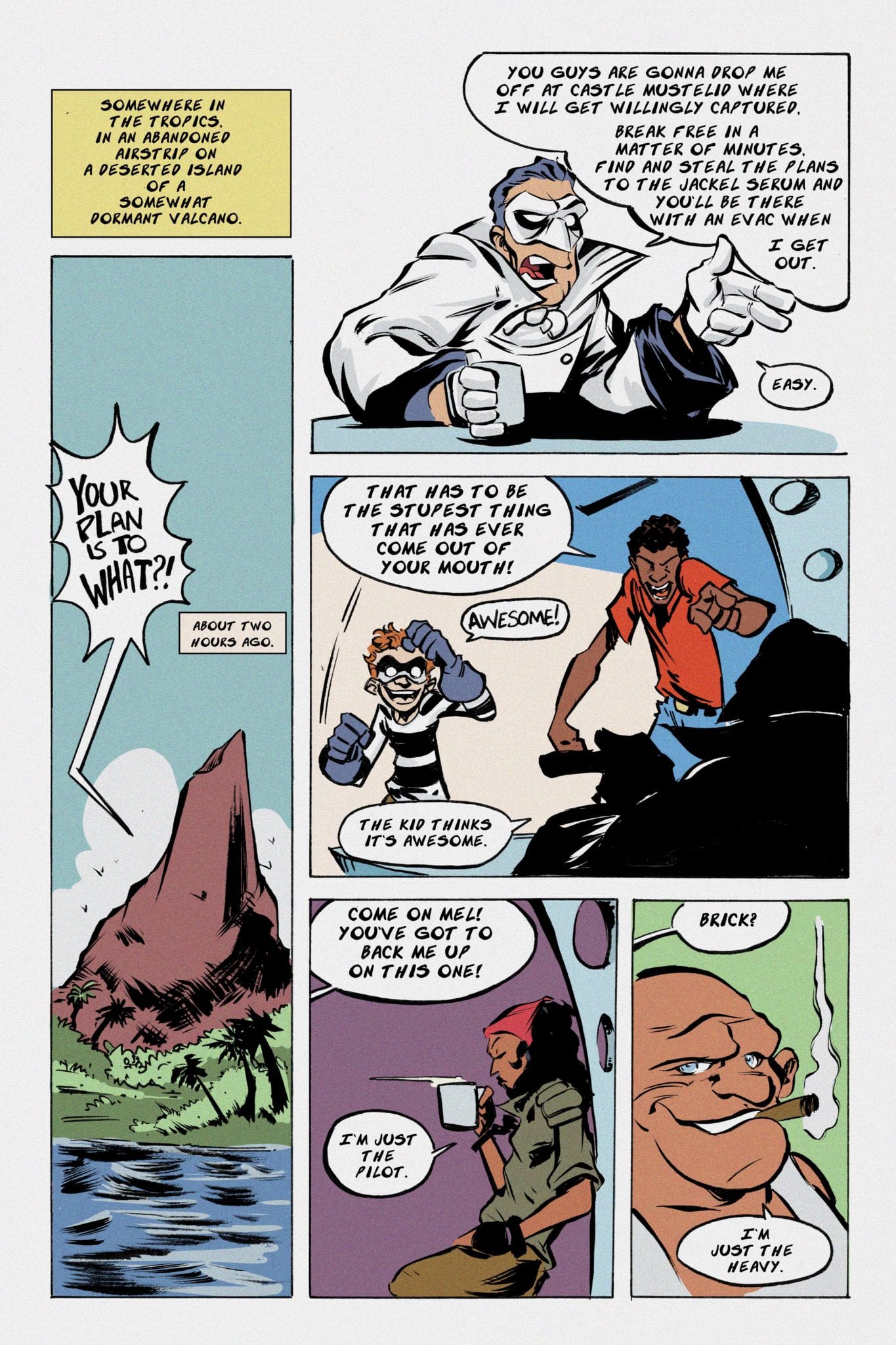 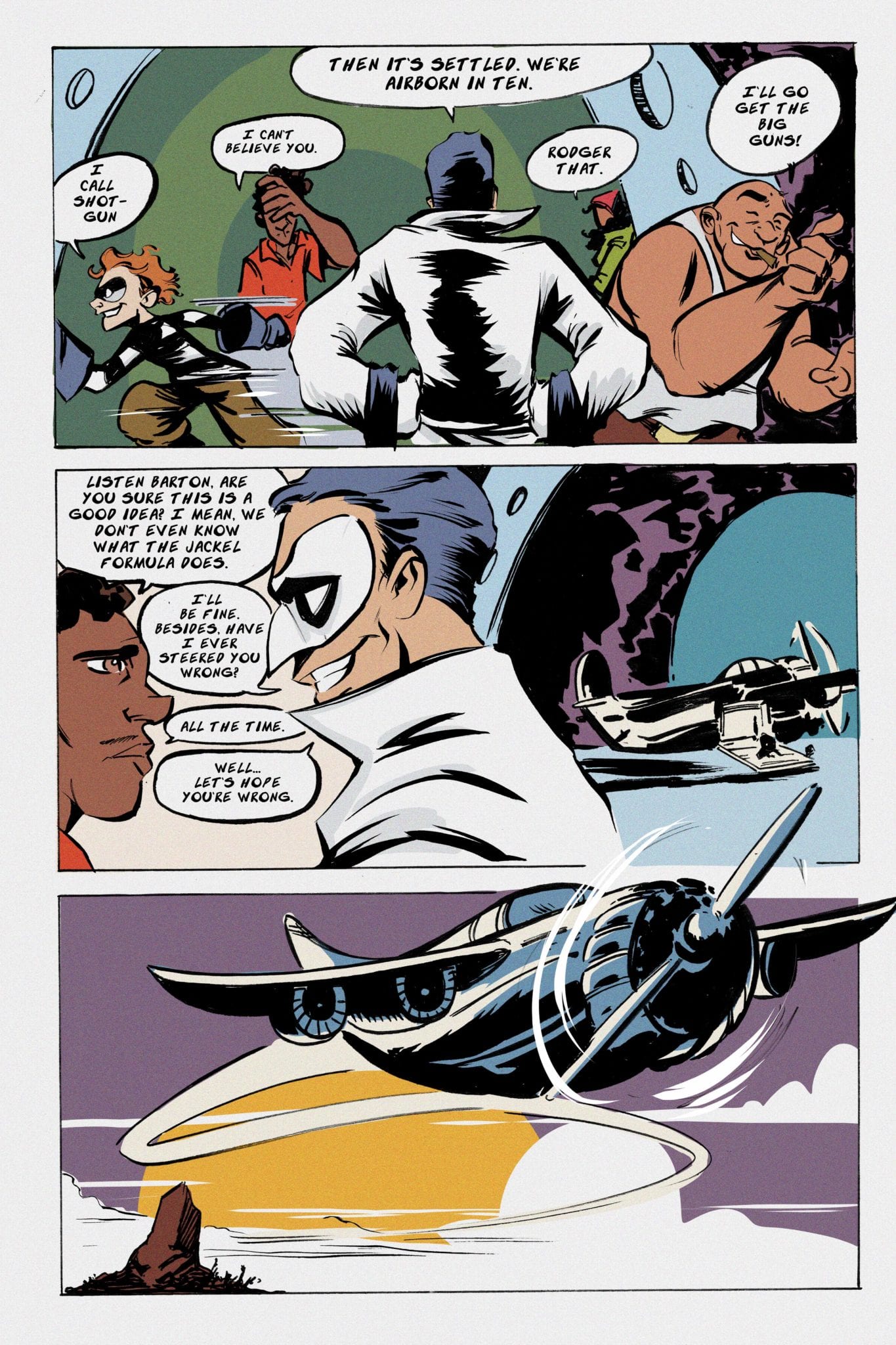 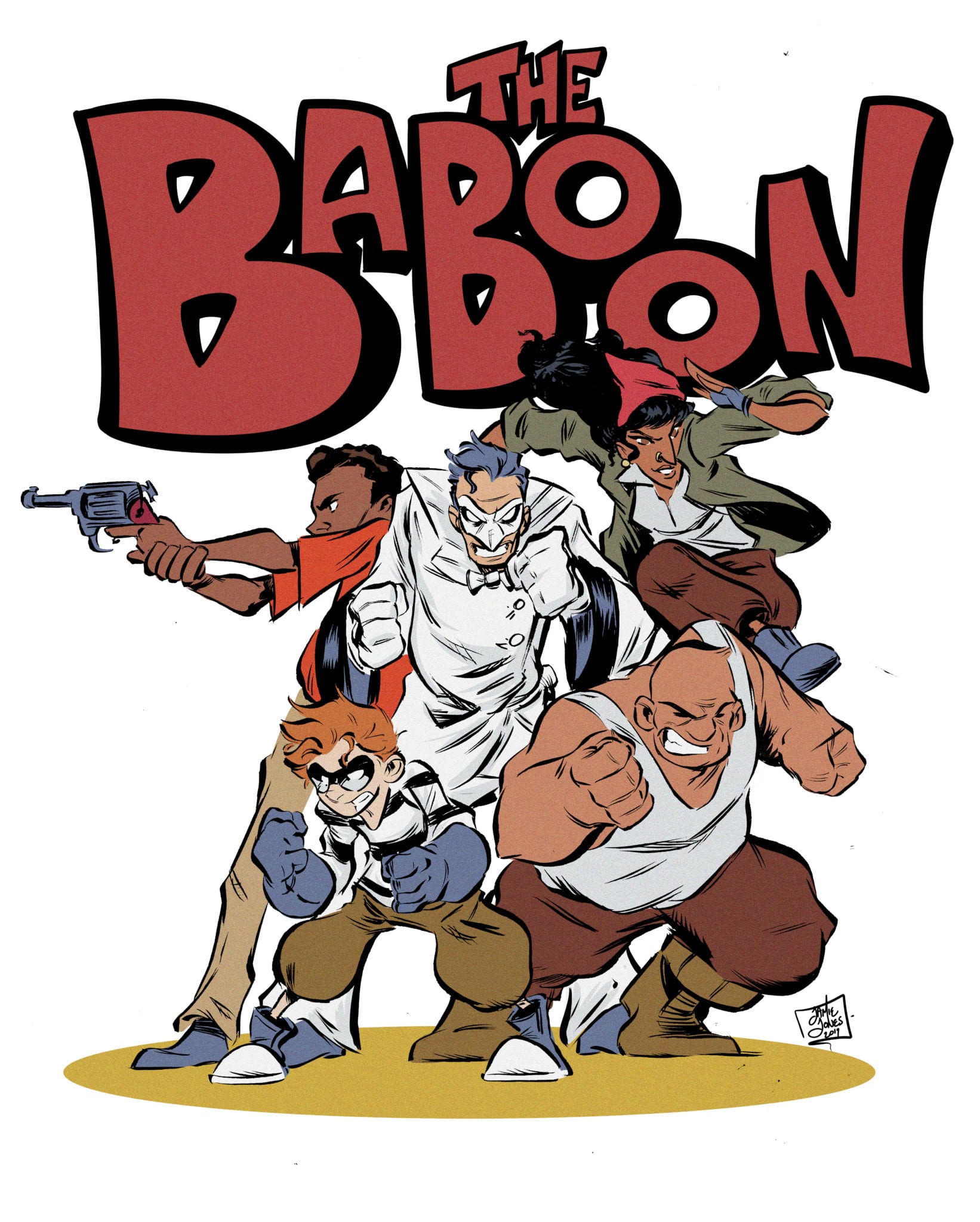 THE BABOON is an all-around good time that you can enjoy on your own or share with your kids. With bright, energetic art and wonderful characters, it’s got enough action, excitement, and humor to fill your tank and keep you reading. You’ll knock this bad boy out in a single sitting and immediately start it over again.Review: THE BABOON Is The All-Ages Adventure Comic You’ve Been Waiting For