Review: TAARNA #1 and the Answer to Cosmic Chaos

Few images are more iconic to both comic and cult-film enthusiasts than the image of Taara on the poster of the 1981 animated film Heavy Metal. Her appearance in that film, as well as the long legacy of creative insanity that has decorated the many volumes of Heavy Metal Magazine over the years, demands that her own comic live up to that image. Fortunately, writer Stephanie Phillips and artist Patrick Zircher, as well as colorist Jessica Kholinne and letterer Marshall Dillon, are all on hand to deliver. “Taarna” #1 is a grandiose flight through dying stars and the cosmos that starts off this new series in epic fashion. A simple but compelling narrative-focused script and truly stellar artwork make this debut issue a must own for fans of Heavy Metal or just comics in general.

“From the death of the last Taarakian and a collapsed universe, Taarna was born. Heavy Metal‘s flagship character from the animated film returns in a new series of cosmic mystery and battles throughout the multiverse in her war against Kako, the embodiment of chaos. This is the story of a millenia-old battle between godlike beings, with all sentient life caught in their path.” 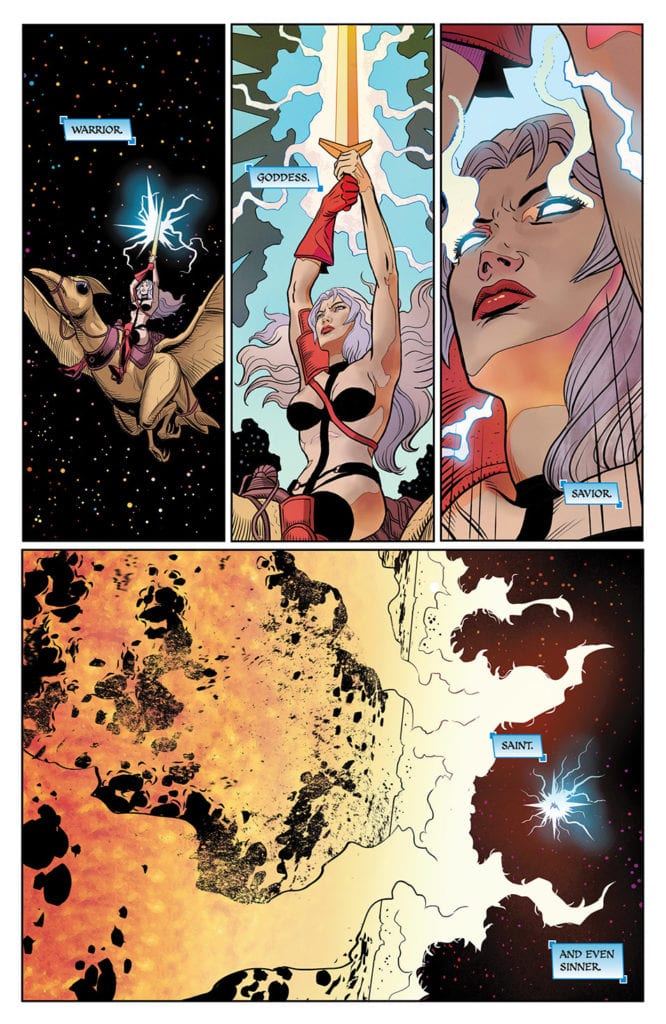 Stephanie Phillips (The Butcher of Paris, Harley Quinn) starts off this 6-issue miniseries by declaring from go the scale of power being dealt with here. Her script for “Taarna” #1 sets up the character as a goddess-like being, who has been around for numerous millennia foiling cosmic entropy at every turn. Her opening act, saving a planet from a dying sun, is written from the perspective of the people being saved and immediately gives Taarna the appearance of this majestic savior. Phillips further sells this image through how she presents the story. There’s very little dialogue in this issue, as Phillips instead writes most of the comic as overhead narration describing Taarna’s place and deeds in the universe. This gives the titular character the mythic guise that also fits the story’s setting and scale. A large chunk of this comic has Taarna flying through space on her cosmic pterodactyl under the narrative, and this is super effective in making this book feel epically badass. This issue took me back to the first time I ever watched Heavy Metal, and I’m certain that’s what Phillips was aiming for. This comic’s simple written presentation makes it an easy book to jump into while still being highly effective and really fun to read. 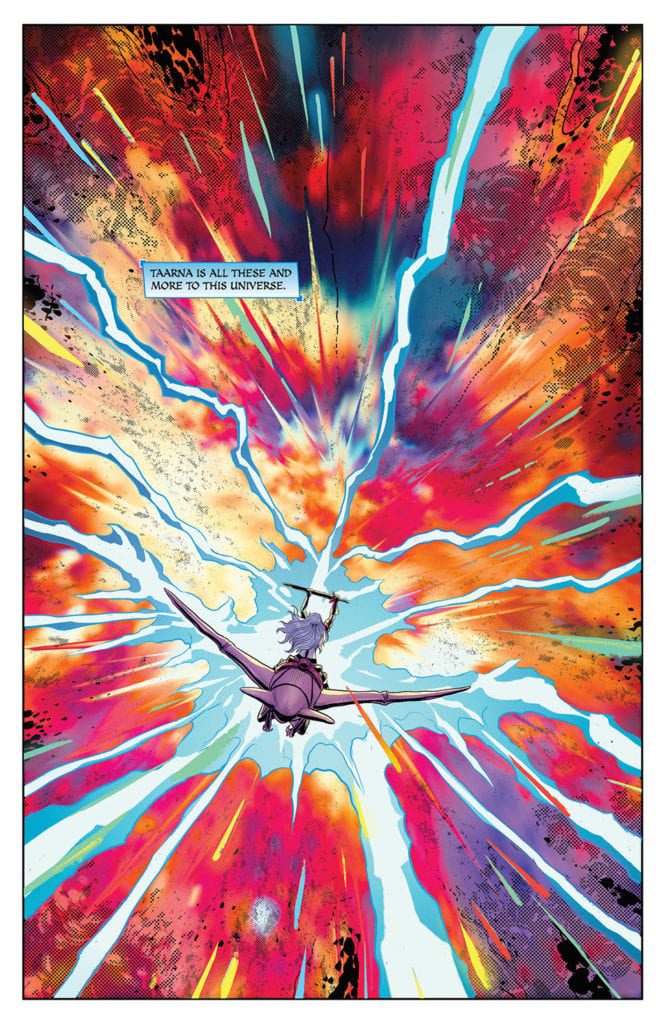 A comic with the kind of epic subject matter that “Taarna” #1 offers would be a complete bomb without the proper visual representation. Fortunately, Patrick Zircher is on hand to bring his clean and highly detailed pencils to bear. The character animations and detail are outstanding, and up among some of the most polished work I’ve seen recently (slightly reminiscent of the likes of Ivan Reis or similar mainstream comics artists). His illustration of Taarna especially makes her look as goddess-like as the character deserves in this series, over-the-top beauty combined with amazonian-esque power. Zircher’s illustrations of the cosmos work in tandem with his panel direction; most of the comic is presented in large panels that display large portions of spacey and divine scenery, and it makes the comic read almost like a storyboard. The colors from Jessica Kholinne are a huge part of what makes the art work so well, as the array of colors from all three major scenes in the issue are vibrant and varied. The booming, starry colors of passing galaxies and nebulas all shimmer with an outstanding array of vivid detail and sell this comic’s grand scale. Letterer Jim Campbell uses a sort of mythic, heavy metal record-looking font for the narration and a more classic comic font for dialogue, creating a fitting and smooth reading experience. This comic provides the exact look of galactic badassery that Taarna deserves. 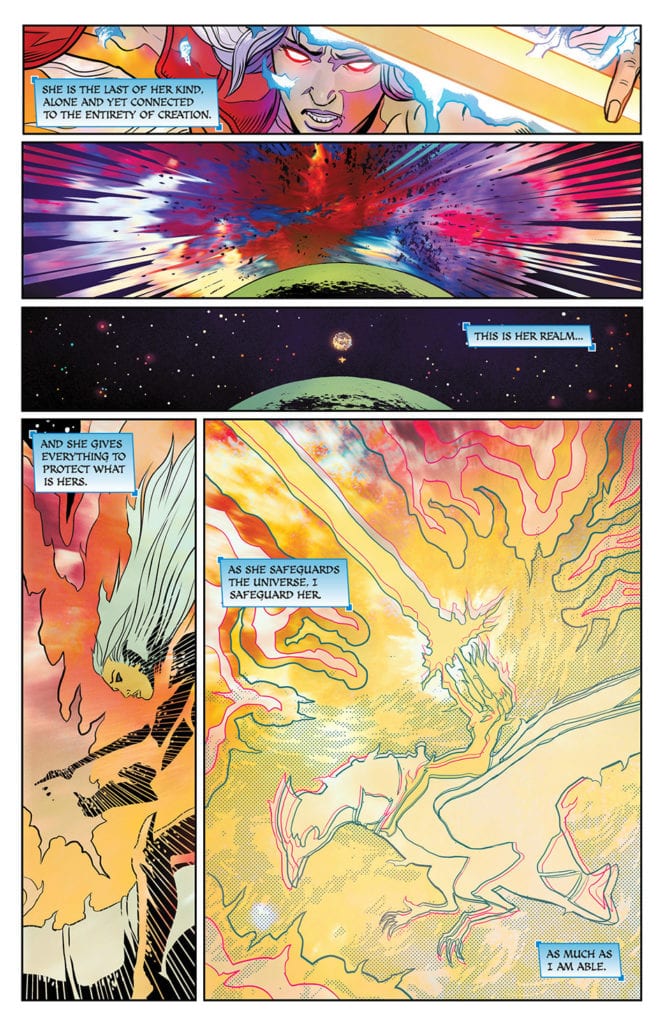 “Taarna” #1 is a debut issue celebrating one of cult fiction and comic’s most iconic figures, and it does so in awesome fashion. The script from Stephanie Phillips reads like the steady unraveling of a cosmic myth, and the fact that it’s only the first of 6 parts makes it all the more enticing. The visuals from Patrick Zircher’s pencils and Jessica Kholinne’s colors make this grand odyssey through the multiverse a stunning trip of mysterious planets and exploding suns. This a a kick-ass first issue, and a must-buy for any fan of Heavy Metal Magazine or cool comics in general when you visit your local comic shop on 12/16.

An epic flight across the stars starts this gorgeous new adventure from Heavy Metal Magazine's long-standing icon. Review: TAARNA #1 and the Answer to Cosmic Chaos