Review: SWEET TOOTH: THE RETURN #3 Keeps Amping Up Its Mystery

Writer and artist Jeff Lemire’s sequel to his career-making hit hits its third chapter with “Sweet Tooth: The Return” #3. This issue ups the tension of the story by increasing the cast of important characters, each with their own personal stakes in this mysterious game being played. The mystery surrounding the hybrids, the world they now live in, and this new “Gus’s” relationship to the events of the prior story starts to clear – while still staying just out of reach. With tight pacing, brutal action, and Lemire’s trademark charming art style, this is yet another stellar comic issue for both Sweet Tooth fans and newcomers.

“Oh no, oh no! Things are even worse now! Father told the boy and Penny to go to the jail cell for a time out, but now it looks like they have escaped! And what’s this? One of Father’s nannies has gone missing too? And the Downsiders are angry with Father? Oh dear, this simply will not do. Not one bit. The people must be put back in their places. Order must be maintained. Otherwise humanity cannot survive. Will Penny and the boy ruin Father’s perfect plans, or will he have to put an end to the meddlesome children?” 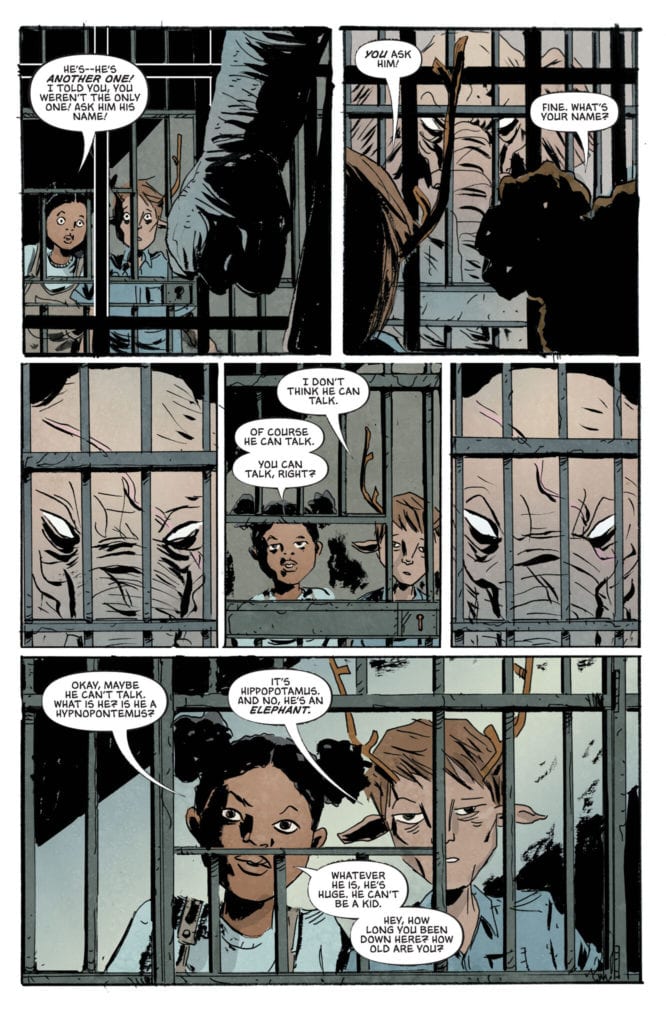 “Sweet Tooth: The Return” #3 feels like the part of a roller coaster just after the initial climb, just as gravity begins to let go and your stomach is jumping through your lungs. The tension and mystery of the first two issues is reaching a fever pitch, and it culminates from two perspectives: the perspective of the “downsiders” living under the rule of the conspiring Father, and “Gus” and his new friends. This is a shockingly bloody issue thanks to the introduction of Gus’s newest ally (a freakin’ elephant hybrid) wreaking tremendous havoc, and the final page reveal is a doozy of a cliffhanger. This issue’s pacing makes the absolute most of the 22-page comic book length, condensing an immense amount of story into this comic. It’s all done with almost no narration, and most of the exposition coming in the form of personal dialogue from the characters. The plight of the “downsiders” living under authoritarian zealots and having friends and family members go missing without explanation is not a new tale, but Lemire’s storytelling is so compelling that it makes this group of character immediately interesting. The way Lemire is tying this series back into the original is a steadily unraveling mystery that has officially launched into overdrive, with mystery colliding with character driven desperation and hope. It’s a Lemire story, after all. 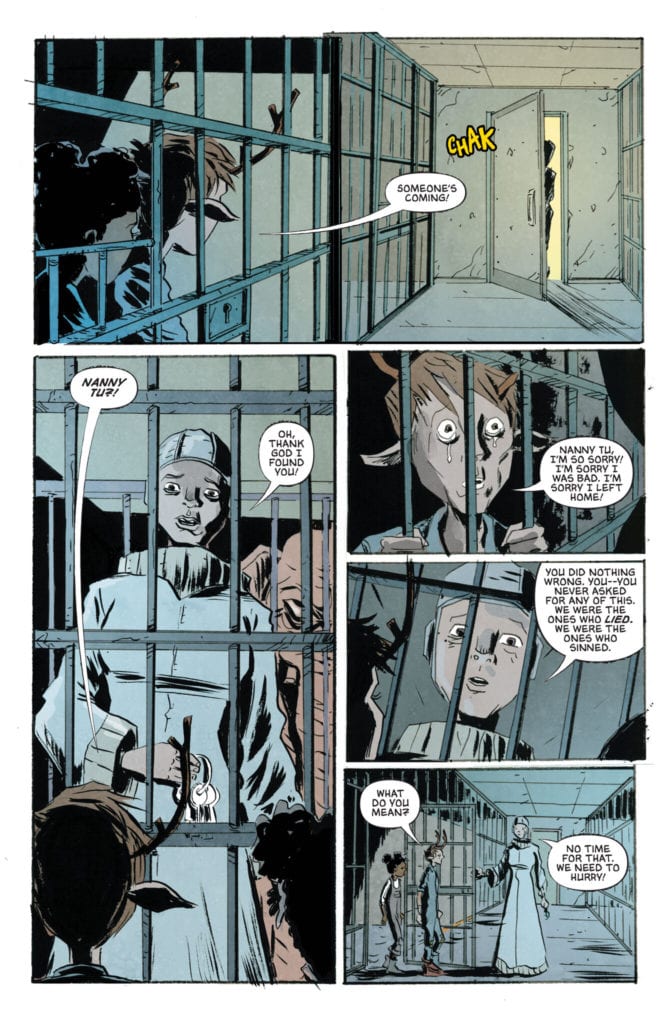 I’ve talked at length about the charm and beauty of Jeff Lemire’s art and how it works within Sweet Tooth in may previous reviews of the series. “The Return” #3 does more of that, with the same intimate detail that makes Lemire’s visuals so special. It’s his animation of facial expressions that really stick out here (and in all of his art really), and it effortlessly pulls you in to the characters. The newest introduction to “Gus’s” party includes an elephant hybrid who on the outset doesn’t appear to show much emotion. You know, because he’s basically an elephant. However, Lemire ingrains the tiniest subtleties into his expressions to create expressions of anguish, rage, and trust when confronted by his torturers and his new friends. His panels and visual direction are directly character focused, with what must be half of the panels in the book showing the speaking character’s face directly facing the reader. Lemire’s deceptively complex work hides under the fact that it is aesthetically so rough-looking. His work is aided by colorist Jose Villarrubia, whose work adds stunning watercolor dimensions to  the characters and their world. The sterile whites and dim grays of their underground society are met with jarring yet beautiful psychedelic color arrays during flashbacks. The visuals are exactly on par with those in the original comic, just with a backdrop of caves and laboratories rather than forests and post-apocalyptic towns. 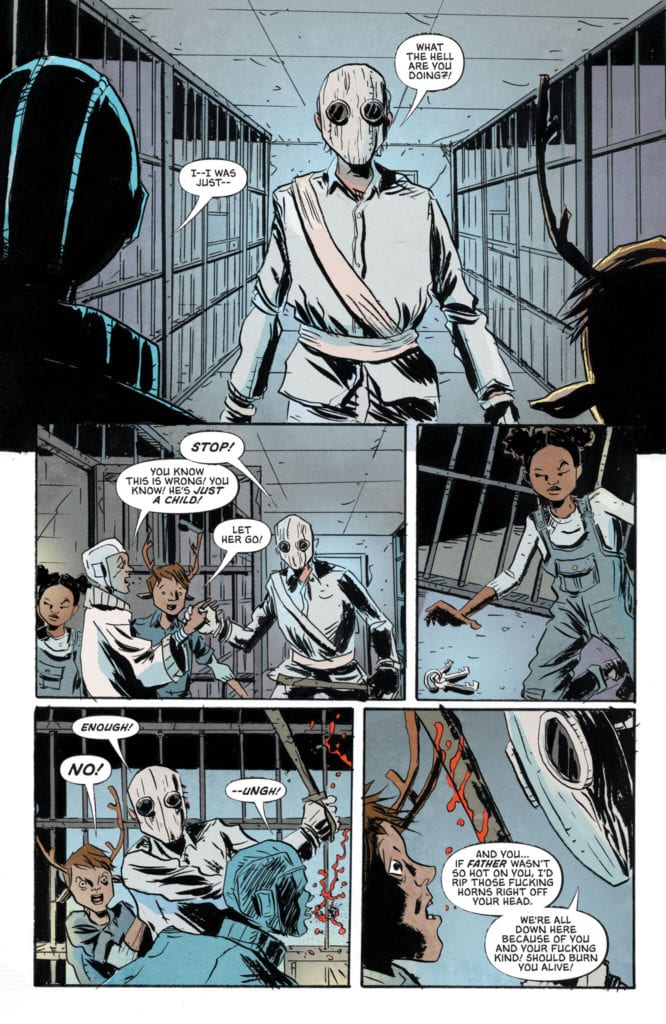 “Sweet Tooth: The Return” #3 is a gripping third chapter that ramps up the story’s pace and puts more character’s cards on the table. Lemire has begun to divulge larger chunks of this story’s connection to its predecessor, but is still focused on a more present and character-centric delivery for this tale. His artwork with the help of Jose Villarrubia’s colors are still every bit as detailed and charming as they were in the original series. Be sure to grab this newest issue from your local comic shop on 1-12!