Review: SUICIDE SQUAD #11 is the End of the Beginning

DC Comics’ Suicide Squad #11 concludes this no-holds-barred romp through the DC Universe. Or does it? Writer Tom Taylor, artist Bruno Redondo, colorer Adriano Lucas and letterer Wes Abbott suggest that they might have more planned for this team. Regardless of what comes next, this finale issue is the send-off we all wanted.

Taylor doesn’t waste any time on this issue. He puts a couple of quick twists at the start of the book but doesn’t feel he needs to explain them. He knows we’re following, and he wants to get to what’s next. As everything begins to wind down, Taylor reminds us why we love the Suicide Squad so much. They’re mouthy, and they don’t play by anyone’s rules. Taylor brings them face to face with some of the biggest players in the DC Comics Universe, just to show that they don’t flinch for a second. Taylor gives us one final nod that this may be the beginning with some careful tying up of loose ends. Let’s hope he’s right.

Redondo reminds us that the Suicide Squad doesn’t have to be the big-timers to have power. When members of the Justice League show up, Redondo makes a point of them taking up a lot of space on the page. They’re huge, and their presence is felt everywhere. But it’s a small lady, walking right up to Batman and looking him in the face, and Wink peeking over his shoulder, that drive the scene. They’re small, but they’re powerful. And as we see The Revolutionaries retake flight as a team, Redondo shows us how much power they have. Each of the pages of them in action has the whole panel grid slanted, on the diagonal. It gives us the impression that these people really are revolutionizing the world they live in.

If you look at Lucas’ pages in Suicide Squad #11 as a whole, you could almost assign a single color to each. The first few pages start with a soft blue, with red sprinkled in. It’s a scene that’s set up to look grim and serious. Lucas establishes this tone so that one of the characters can ignore the situation’s seriousness, with great comedic effect. Later, as we transition through red and purple pages, Lucas begins to focus in on the color yellow. Yellow, which has so often been the fun backdrop to a fist to the face or a gun going off, becomes the color of The Revolutionaries. They themselves are bringing a new dawn, with a bright yellow morning on the horizon. 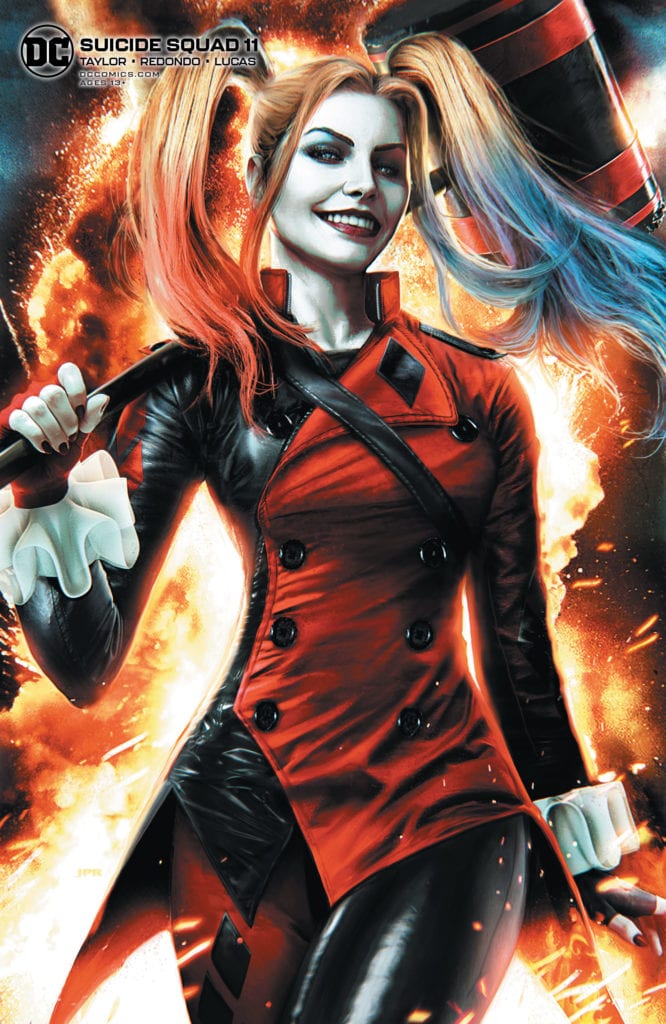 Abbott tones down a lot of the fun sound effects in this issue. We get the “bang” of guns, but they look subdued and small. There’s one particular moment that you would expect a large “boom” from, but no boom comes. It’s very quiet for an issue of Suicide Squad, but that’s because Abbott wants us holding our breath. As things resume to an even keel, Abbott goes back to the status quo. Large, vibrant sound effects for even the most simple noises. It acts as a kind of celebration of the return to norms.