Review: SUICIDE SQUAD #10 is Really Sad by Choosing to be Very Fun

Written by Tom Taylor, with art by Bruno Redondo, colors by Adriano Lucas, and letters by Wes Abbott, DC Comics’ Suicide Squad #10 doesn’t get caught in trying to make us care. With the devastating events of the last issue, this creative team allows the tragedy to speak for itself. In a loud and colorful series, they opt for a more subtle approach when it comes to Deadshot’s death. This allows us to feel the loss of Floyd on our own, not because we were told to.

Taylor doesn’t waste time in this issue. None of the characters gather around to say some words about Deadshot’s life. I mean, hell, they don’t even get a chance to bury him. Instead, they are all forced to run off on the next act of this wild ride. Taylor speeds past the Suicide Squad’s pain and sadness. This actually makes the pain feel more real. Not only does it feel like they’re avoiding thinking about it, but it also feels like what Floyd would want them to do. Instead of allowing his death to be a waste, the Suicide Squad is hot on the trail of the real puppet master behind the scenes. Taylor allows just a couple nods to Floyd’s sacrifice: Harley grabs his mask and wears it for a fight and is later dragged away from his body. There’s no time to mourn, but Taylor’s acknowledgment of there being no time gives us a moment to feel the pain anyway. 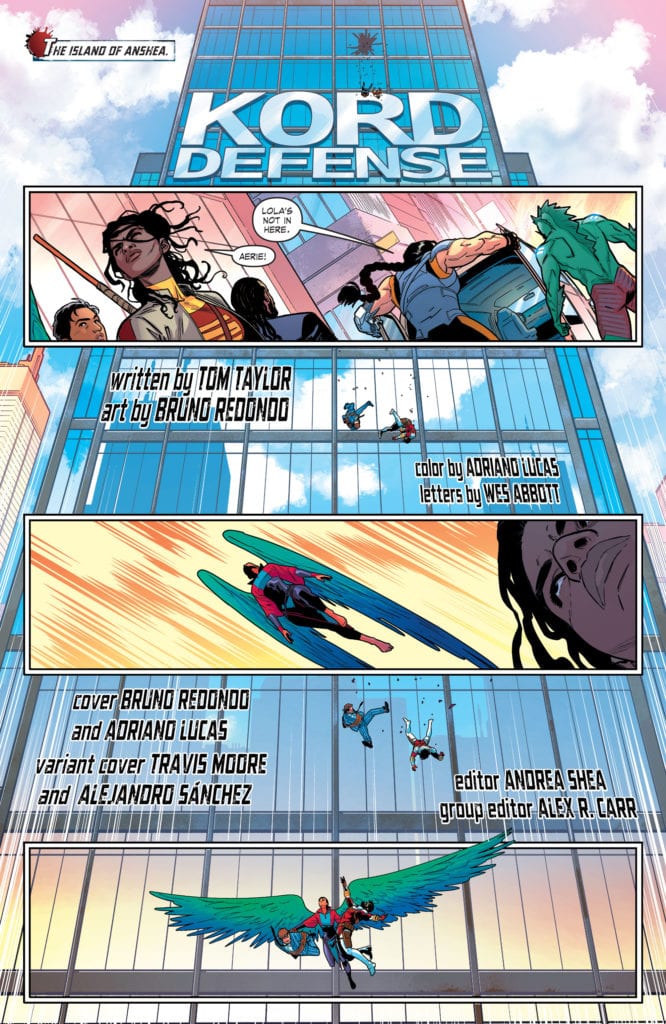 Redondo shows us how each of the Suicide Squad members deals with Deadshot’s death. Of course, there’s the initial sadness seen in all of their faces. Redondo beautifully depicts the recognition of Deadshot’s death as a kind of pieta. The Aerie acts as a Mother Mary figure, holding the body of Deadshot, who’s in the position of Christ. By bringing up this image, Redondo highlights the injustice and sacrifice of Deadshot’s death. As the issue progresses, we see most of the Suicide Squad’s faces go from sad to angry. And Redondo helps us feel their anger. Black Mask’s nonchalance is infuriating. He barely has his eyes open throughout the issue. Killing Deadshot is just another Tuesday to him. But things begin to change when we see the Squad face the army sent to stop them. They all look off-panel, their faces full of fury. We see Harley pull on Deadshot’s mask. Even with the mask obscuring her face, we can see the change in her eyes. It’s a dangerous change for anyone who gets in her way. Deadshot was a martyr, and his disciples are out for blood.

Lucas’s vibrancy is still going strong. There’s no black cloud that hangs overhead in this issue. Lucas colors action scenes with backgrounds of bright yellow and orange. The skies are still blue. But there’s a looming death too. When we first see Deadshot, the background is a dark red. It’s easy to associate red with death at this point. The problem is, the Suicide Squad is often cast in a red glow from then on. We see the red shine of the sun as Black Mask’s helicopters swoop in. We see the red lights aboard Black Mask’s private jet. Even Harley Quinn is still sporting her red jacket. With Deadshot’s mask on, it’s hard to find this color in her uniform as innocuous as it once was. But the question remains, is it the death of the Suicide Squad that is drawing nearer, or are they about to bring death in their wake? 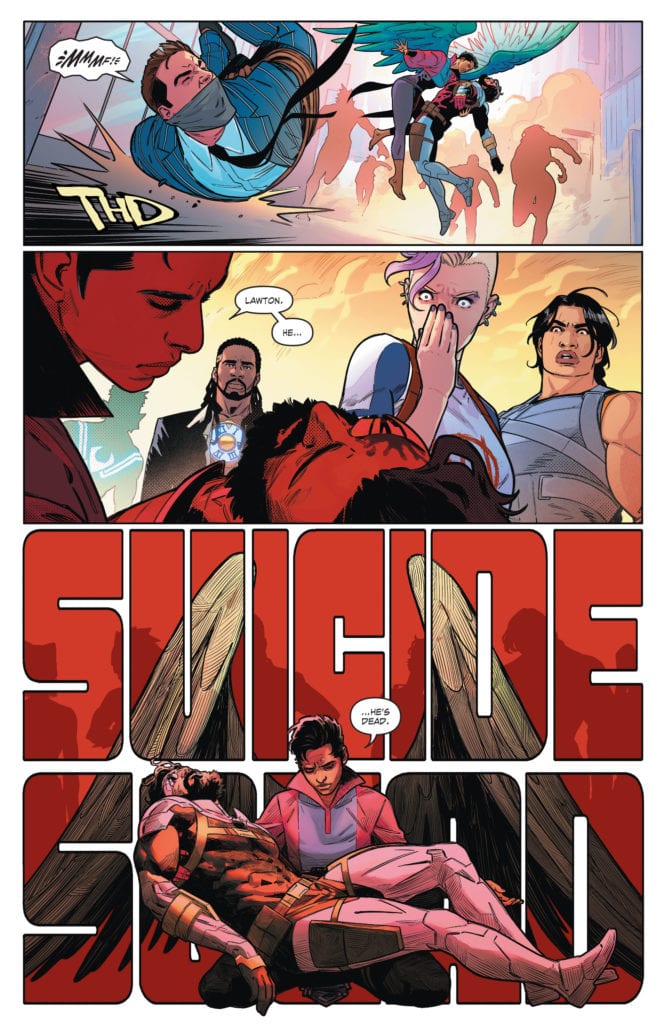 Abbott also keeps the buoyancy of issues gone by. Every punch, kick, and explosion is given a giant neon sound effect. Even the issue cover has a kind of lettering that seems to fly in the face of what you’d expect the tone to be. Blue Beetle, cowering at the sight of the Suicide Squad, is saying, “Wait! You’ve got it all wrong!” in what can only be described as fun letters. Abbott pushes the doom and gloom back, again insisting that these characters don’t have time to mourn. And later, as one character is smacked across the face, Abbott gives us whiplash. We see the noise of a hand making contact and the person’s scream in agony, flying off to the right side of the page. But the next panel brings us back to the “k-klang” of something hitting the floor on the opposite side of the page. We almost feel how the character’s neck feels at that moment. The sudden move from one side of the page to the opposite mimics the movement of their head.

DC Comics’ Suicide Squad #10 is funny, joyful, and loud. It isn’t the issue you would expect coming on the heels of a major character’s death. But that’s what makes it so great. Taylor, Redondo, Lucas, and Abbott insist that the Suicide Squad doesn’t have time for goodbyes. They have a mission that they have to get through. And ignoring the pain only makes it worse. So this creative team manages to make a truly devastating comic that’s in the guise of a very happy one. Suicide Squad #10 is out from DC Comics on October 27th. Pick it up at your local comic book shop!

This creative team manages to make a truly devastating comic that's in the guise of a very happy one.Review: SUICIDE SQUAD #10 is Really Sad by Choosing to be Very Fun