Written by Tom Taylor, with art by Bruno Redondo, colors by Adriano Lucas, and letters by Wes Abbott, DC Comics’ Suicide Squad #9 is full of dramatic irony at its best. There’s no way to talk about this issue without spoilers. This creative team has been incredibly forthright about what this issue includes. They’ve shared spoilers on Twitter, through solicitations, and even in the comic itself. That’s because Suicide Squad isn’t a series that is “spoiled” by spoilers. It thrives off of them.

Taylor has crafted this whole issue around one simple idea: the readers know Deadshot will die. I mean, even the cover goes out of its way to make sure we know. But Taylor is banking on us knowing. He isn’t in this to shock us. He wants us to care. We see Deadshot’s conversations with his daughter and his teammates. Every moment is bittersweet. But Taylor doesn’t play up the doom and gloom either. He plays against the tragedy of the issue by making Deadshot as confident as ever. He’s invincible until he isn’t.

The moments in this issue that are “lasts” for Deadshot still carry his signature nonchalance. We don’t see him hugging or weeping with anyone. That’s because Taylor wants Deadshot to live like he’s never going to die. Just like he always has. Taylor brings us the joy, badassery, and humor that we love Deadshot for, right up until his final moments. It makes it all the more tragic when we see him go. 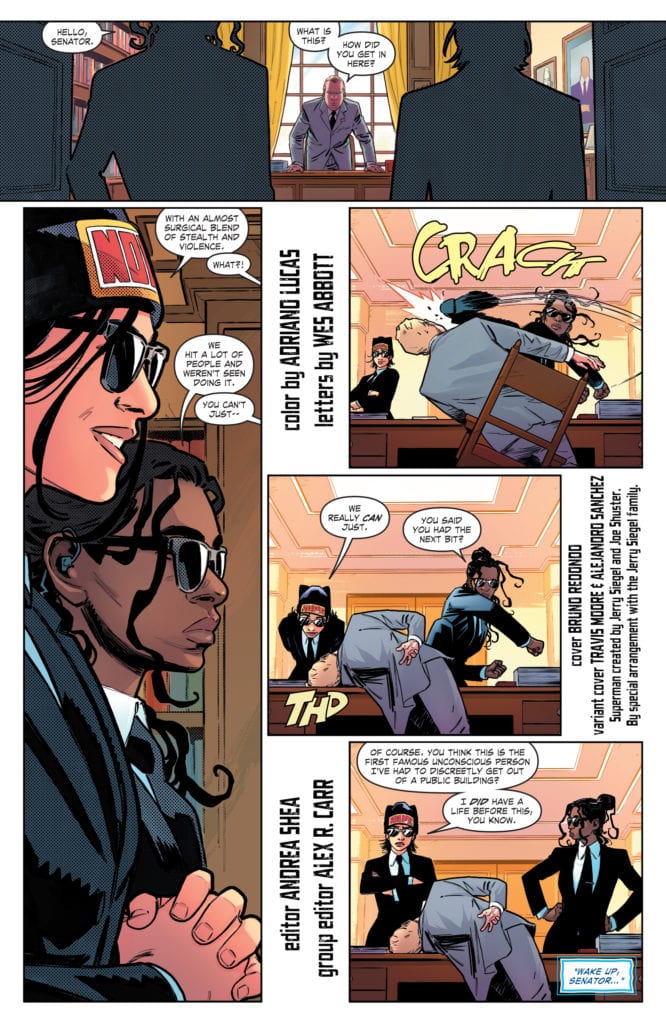 Throughout this issue, Redondo shows us Deadshot at peace. He’s talking with Harley over a waterfall or with his daughter in the woods. These pages don’t have a border to them. The picture continues right off to the edge of the page. It makes each of these moments feel like they last forever. It’s as though the page layouts are begging Floyd to stop. Don’t go see Ted Kord, don’t try and get revenge. Just stay in the woods. Talk with Harley. Talk with your daughter.

But as the Suicide Squad enters the city, we get another borderless page. This time, it feels like we’re trapped. The explosions and violence in the panels in the center of the page are all Floyd knows. This is his entire world. And when things begin to boil to a head, the borders come back. Each panel becomes another small step towards Floyd’s doom. And Redondo leaves us with one final, borderless page. A tragic page that goes on forever. Lucas stays wonderfully fun in this issue. This isn’t a funeral march; it’s a party. In fact, it’s the moments Deadshot is out of danger that feel the least fun. His conversations with his daughter and Harley out in the woods look beautiful, but they’re more serene and calming than anything. When Deadshot does what he does best, the colors get crazy. We get the bright yellows, oranges, and reds that come with a battle scene. And Lucas almost seems to be signaling to us how close Floyd is to danger.

The yellow action backgrounds turn to orange when Osita starts yelling. It’s as though she’s putting them in danger. Blowing her lid means they could all die. She brings them a step closer to danger. When she leaves, the action sequences have a yellow background again. The moment has been defused. We’re safe. But Lucas makes us feel safe for a second. As Floyd stares at a gun in his face, the background of the panel is red. Lucas faked us out, and the danger comes back in with a vengeance, cruelly skipping orange on its way.

Abbott’s subtlety is really on display in this issue. As this issue of Suicide Squad opens, we see Chaos Kitten and Thylacine infiltrating a building. Kitten’s punches are shown in block letters with a clear outline; Thylacine’s are given a messy edge. We get a sense that Thylacine is holding something back and that if it broke through, it would be messy. And later, as Floyd and Harley talk about their time together on the Suicide Squad, their dialogue practically overlaps each other.

This is their typical banter. But as they finish talking, Harley says, “But… I’m proud of you, and I’ll miss you.” Deadshot’s next line gives hers a wide berth. We feel how deliberate his response is, and we can sense the pause between the lines. “Yeah, you too, Quinn,” he responds. With a simple change of spacing in each panel, Abbott gets this moment to stand out and gives it the center stage it’s due.

DC Comics’ Suicide Squad #9 gets tragedy so perfectly right. It lets you know what you’re in for and then tricks you into believing that maybe they’ll all make it through alright. It’s an issue that plays with our hope and breaks our heart like only a brilliant story can do. Pick up DC Comics’ Suicide Squad #9 Tuesday the 22nd from a comic shop near you. It’s incredible!

This issue is built around tragedy, and this creative team makes the whole thing even more tragic with one simple rule. They ignore it.REVIEW: SUICIDE SQUAD #9 is Perfectly Doom-Filled