DC Comics’ Strange Adventures has changed the face of comics. This series has taken risks and pushed boundaries, all to deliver a game-changing story. And writer Tom King, artists Mitch Gerads and Evan “Doc” Shaner, and letterer Clayton Cowles stick the landing. Strange Adventures #12 is the complex, bittersweet, and difficult conclusion to an incredibly layered series.

To say King’s finale to Strange Adventures is “satisfying” might be a bit of mislead. See, King often doesn’t do “satisfying.” He’s more interested in his stories leaving a mark. And Strange Adventures certainly does that. But it does so with complicated stakes and heartbreaking dramatic irony. In one of our storylines, we see Alanna Strange. She breaks out into monologues of Shakespearean magnitude. Her grief is real, her fury is frightening. But, in our other storyline, back when Alanna and Adam are deciding to write Adam’s memoir, we see her full of hope and bright-eyed innocence.

King doesn’t just want to break our hearts with Alanna’s woes. He wants to break our hearts by showing us how far she’s fallen. It wasn’t so long ago that she believed in something. She joyfully begins writing Adam’s book, Strange Adventures, with a cheeky smile. But in the present day, she’s jaded and bitter. The only emotions she can muster are filled with pain. It’s a fitting conclusion. King is discussing what loss and lies can do to someone, with this series. The only reason we might not be fully satisfied, is because King doesn’t want us to be. He wants our heart to go out to these characters. He wants us still to be invested, even after the last page has been turned. 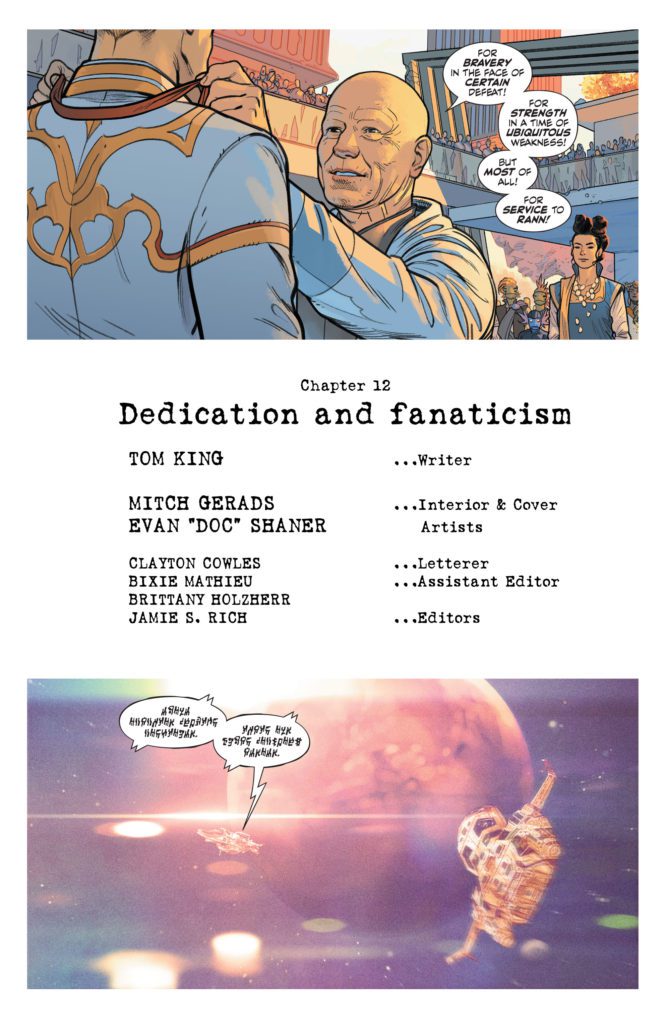 Gerads and Shaner capture the dichotomy of this script beautifully. Gerads’ pages and panels are full of emotion. We see Alanna in tears, her face contorted into painful expressions. But it’s all so earned. Gerads has filled his pages in Strange Adventures, thus far, with subtlety and stoicism. The characters he’s presented have had a quiet dignity to them. So, when the gloves come off in this issue, Gerads makes us feel deeply.

Shaner has a gorgeous simplicity to his panels. When we see Adam and Alanna zip through the sky, wearing their jetpacks, it feels like a picturesque scene out of a 60’s comic. This is a space opera, with invincible heroes and larger-than-life stakes. Occasionally, though, Shaner zooms us in on Adam or Alanna’s face. We see the sadness bubbling below their swashbuckling exterior. And as the issue closes, we see them in their home, together. Shaner presents them as truly human. They seem so vulnerable and normal. It’s the last little heartbreak. Shaner drives the knife right in, making us hope that they can live a normal life together, even though we already know that won’t be the case.

Each of Gerads’ scenes have a strong color coming through. The first scene we see is a dark red. It’s the red of blood and the red of a mother’s fury. Then we see the blue of loneliness, as the wages of this battle sink in. Finally, we see a scene colored in the gold of victory. It’s the light in the darkness, the hope in the midst of the trauma.

Interestingly enough, Shaner uses many of the same colors, often back to back with Gerads, to different effect. We see a purplish hue to one of the scenes of Adam and Alanna flying through Rann. Shaner makes it feel like the sun is setting on their time there. And as the issue closes, we see them at home by the blue light of a computer screen. It feels intimate, even cozy, with a hint of sadness. Both artists brilliantly work together to color each scene with intention and emotion. 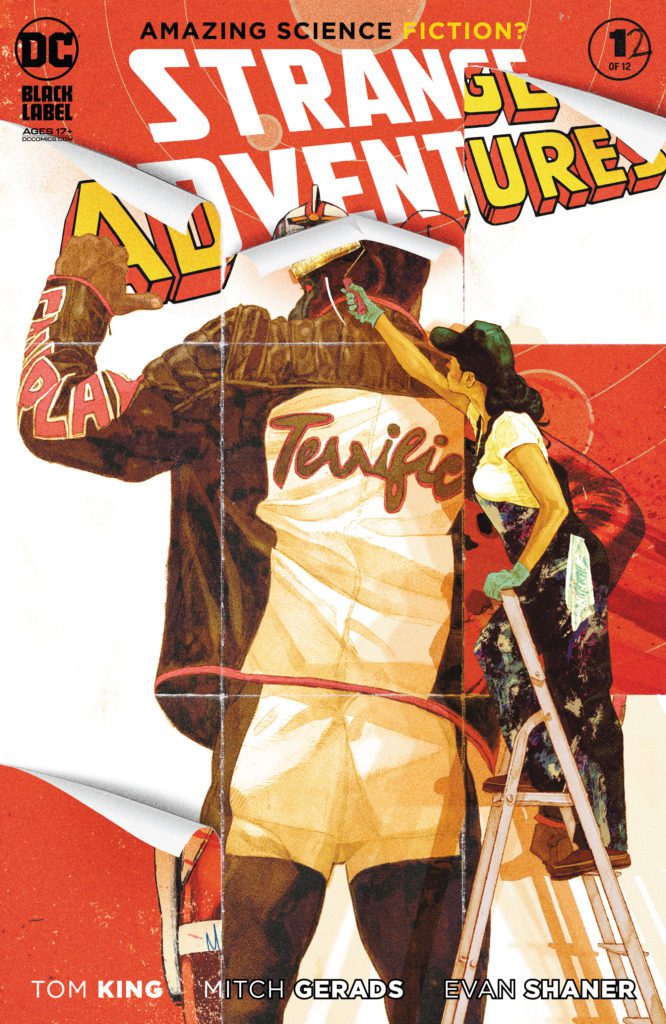 The heights of word balloons, on the page, often give us a sense of tone. When they’re high in the panel, they feel energetic. Depending on the scene, they can seem angry, excited, or intense. When they’re lower in the panel, sometimes they’re simply placed their for ease of reading. Other times, it’s to make the dialogue sound like it has less energy put into it.

Cowles shows us the big difference between the modern day Alanna and her younger self. In her scenes in the past, as she flies around with Adam, her word balloons always reach high. She may have just lost her daughter, but she’s trying hard to carry on. She’s working at being excited, at being present. But the modern Alanna is all over the place. She might have word balloons that overlap others as she interrupts and gets people’s attention, but her words often climb down the page. Her exhaustion, in those moments, is on full display. With the strategic placement of dialogue, Cowles tells us just how much Alanna has changed over the years.

DC Comics’ Strange Adventures is not fluffy entertainment. It reaches right into your soul and digs around in there. It’s a fantastic and complex work. Pick up this beautiful finale, out from DC Comics October 12th, at a comic shop near you!