Review: SONS OF CHAOS Is An Epic Tale Of Revolution

Sons of Chaos is out now from IDW, and it’s an epic, gritty tale of war, independence, and betrayal, all based on a true story.

The graphic novel is by writer Chris Jaymes and artist Ale Aragon. Hi-Fi Design did the colors, Pablo Ayala did the letters and the map, and Mariah Huehner edited the book. The cover is by Dave Palumbo. The story itself is credited to both Jaymes and Jordan Beckett.

Chaos is set largely in 1821 during the Greek War for Independence, “a conflict that quietly influenced the entire world.” It’s the story of Marcos Botsaris, the son of a Greek leader who was taken prisoner as a child by one of the Ottoman Empire’s most villainous pashas. 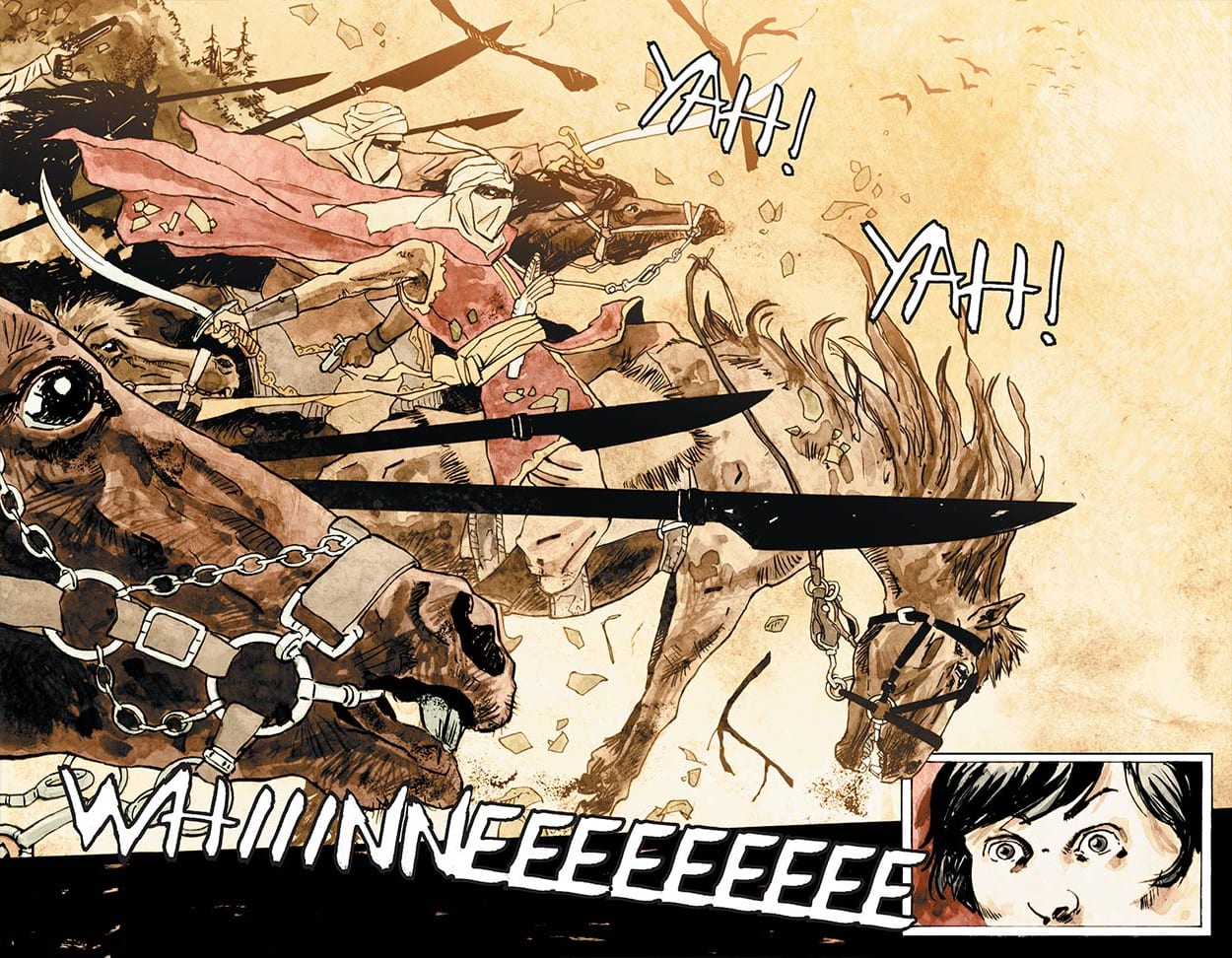 But before even discussing the story or the art, we have to praise the format of this book. It’s put out in this beautiful, oversized hardcover format. The panoramic format of the pages gives the story a wide-screen, cinematic feel. The layout allows you to take in every gory detail; it almost feels like you’re reading the storyboards for an epic film the likes of Ben-Hur or Gladiator. Much thought was clearly put into the presentation of this story, and it shows.

The story itself has already drawn comparisons to Game of Thrones, 300, and Les Miserables, and those are all apt comparisons, but Sons of Chaos also feels completely like its own thing unto itself. Jaymes has written a captivating story, with plenty of twists and turns to keep you reading, and enough tragedy to make Shakespeare gasp. These characters are put through hell.

Sons of Chaos is first and foremost a war comic, and a brutal one at that. Jaymes and Aragon do not shy away from showing how savage this conflict was. Aragon’s art has a sketchy, edgy style to it that’s perfect for this story. It’s raw and realistic; it feels historical. The pages literally look to be stained by blood. If you were asked to close your eyes and imagine what a comic of the Greek War of Independence would look like, Aragon’s art is what you would see. 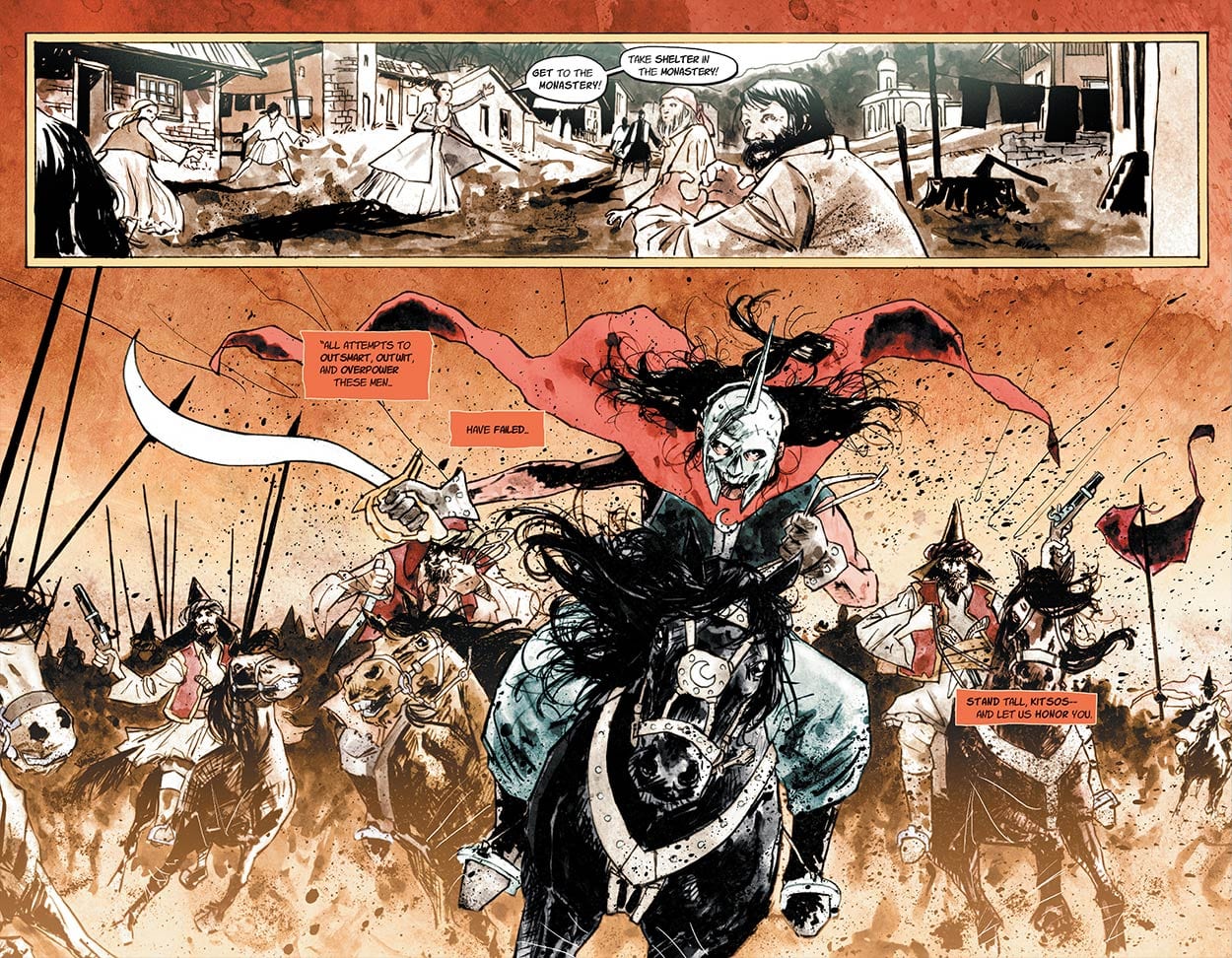 Ayala’s letters have the same effect. His caption boxes have uneven borders. The sound effects have rough edges, and the dialogue looks handwritten. Hi-Fi’s muted colors then have this gorgeous painted quality to them, which sometimes does make it look as if the art was colored with blood. It all comes together to create this bleak, intense atmosphere. You’ll lose hours just studying the intricacies and beauty of the art.

Beneath all the blood and carnage, Sons of Chaos is actually a very personal story. It’s a coming-of-age tale. Readers watch Marcos grow up over the course of the war. Through the various tragedies he goes through, he learns to not only be a fighter, but a leader. It’s an inspiring transformation. Marcos is our window into this world, and Jaymes writes him as a very sympathetic character. We build a strong connection to him as readers, which makes his arc all the more fulfilling by the time we turn the final page. 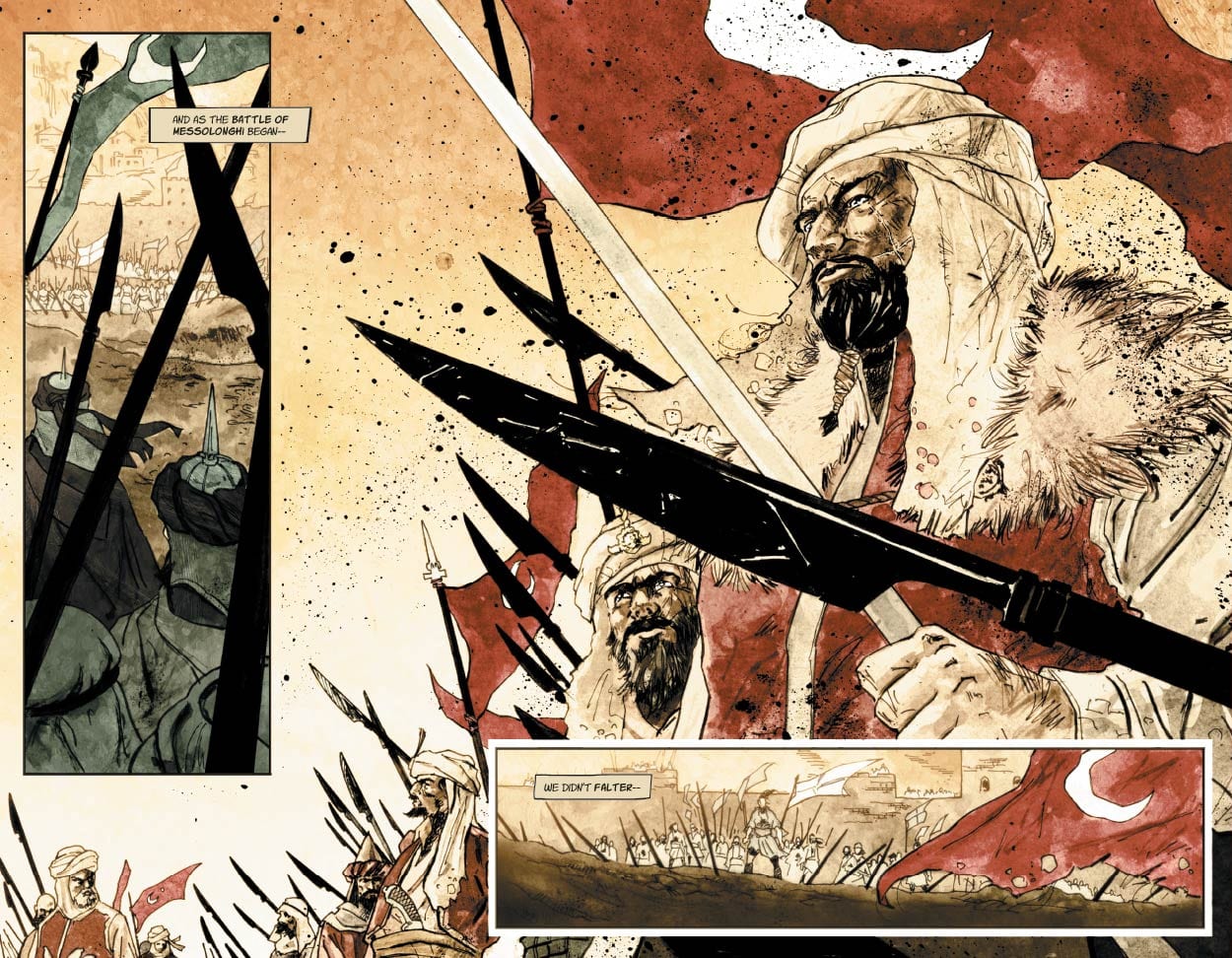 It’s also a story of fathers and sons. Marcos has a tangled relationship with his father, something mirrored in the story of his rival, Muhktar, son of Ali Pasha. Then there’s Marcos’ own relationship with Ali, his captor. These men have certain expectations that their sons never seem to meet, and in Ali’s case, very serious control problems. These complicated relationships makes Chaos more than just a story about Greece fighting for its independence; it becomes a story about people fighting for their own personal independence. War stories aren’t popular because of the blood and guts and mayhem. That’s part of it, sure, but the most successful war stories have this human element to them.

Chris Jaymes, Ale Aragon, and their whole team have crafted something special with Sons of Chaos. It’s an epic story in the purest sense of the word, and you’ll even learn a little about a lesser known conflict that had major ramifications on the world. To quote another great piece of historical fiction that celebrates independence, “let’s raise a couple more to the revolution!”

Chris Jaymes, Ale Aragon, and their whole team have crafted something special with SONS OF CHAOS. It’s an epic story in the purest sense of the word, and you’ll lose hours just studying the intricacies and beauty of the art.Anthony Composto - EICReview: SONS OF CHAOS Is An Epic Tale Of Revolution