Review: SKULLDIGGER AND SKELETON BOY #6 Screeches to a Halt

Dark Horse’s Skulldigger and Skeleton Boy has been a fantastic series. Writer Jeff Lemire, artist Tonci Zonjic, and letterer Steve Wands present a battered, brutal version of their own Gotham City. Except, in Lemire’s Gotham, anything can happen. The Batman-esque character, Skulldigger, could die at any moment. The cop that’s chasing him, Detective Reyes, could put him behind bars for life. Lemire’s Black Hammer Universe is a universe full of stakes. So it’s disappointing when Lemire suddenly seems a little gun-shy. Instead of pulling off a grand finale, Lemire stops the plot in its tracks.

Part of the purpose of Skulldigger and Skeleton Boy was to underline the dysfunction in a Batman and Robin type relationship. Skulldigger wears his brutality like a badge of honor, and the preteen Skeleton Boy seems to take his mentor’s lead in getting a twisted sense of fulfillment from the bloody violence. Yet there’s so much to be said about their relationship. Lemire shows how Skulldigger sees himself in his ward. He wishes he’d had someone to show him the ropes and his heart reaches out to this confused kid. Meanwhile, Reyes sees Skulldigger’s brutality for what it is. She wants to protect Skeleton Boy from the trauma of vigilantism. Lemire yanks us in two directions, leaving a middle ground that’s ripe with complex emotional stakes.

He’s fantastically set up the dynamics between these characters. The reader feels like a lost dog between two kind owners, each with treats spilling out of their pockets. It should be a moment of intense emotion. Yet Lemire skips to the end. We skip the decision and just see its results. It’s almost as though he ran out of pages. Perhaps he wanted to leave us with an ending that felt normal. Maybe his point is that life isn’t the dramatic reality Batman teaches us about. Life’s a bunch of people trying to muddle through, not even knowing when they’re making life-altering decisions. But something doesn’t click. If that’s what Lemire’s saying, maybe he shouldn’t have given us any ending at all. The last few pages of Skulldigger and Skeleton Boy #6 feel unearned. It’s a payoff for work Lemire chose not to show. 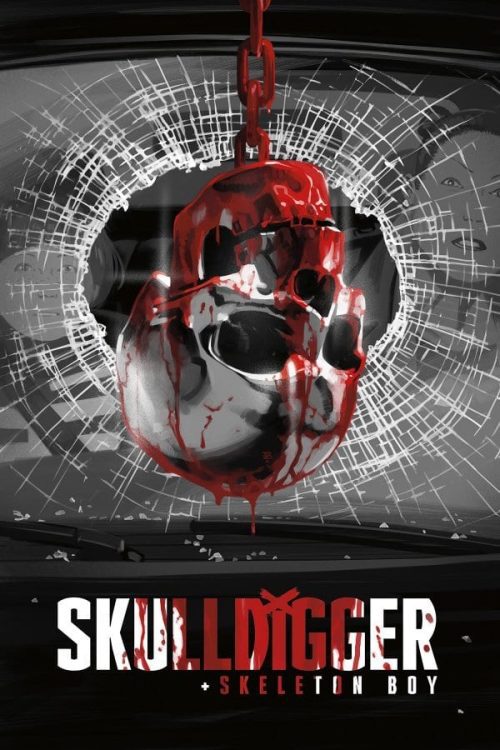 On the other hand, Zonjic’s art certainly isn’t anticlimactic. Zonjic, at one point, uses three double-page spreads in a row. And it’s his work in these pages that sets up the difference between Reyes and Skulldigger. Skulldigger is full of rage and vengeance. In small, methodical panels, Zonjic shows Skulldigger working his way through a crowd of goons. It’s a brutal play-by-play of every bone he breaks and every skull he crushes.

He’s almost supernatural in his violence. But Reyes is instead worried about Skeleton Boy. It’s him she’s focused on, not the chance to get back at Grim Jim. Zonjic shows us each of their approaches on the same page. We see the picturesque storm of violence, with Skulldigger at its center, at the top of the page and the crouched and careful Detective Reyes at the bottom of the page. It’s in this visual juxtaposition that Zonjic teaches us so much about the characters.

Through the repetition of color palettes, Zonjic highlights Skulldigger’s problems. First, we see a picture of him as a young kid, fighting with Tex. It’s a horrible moment between the two. Skulldigger is rejecting Tex’s teachings, claiming to be beyond help. The scene is colored in a light red, like dried blood. And when we get back to the modern day Skulldigger, the color scheme is the same. Zonjic is telling us Skulldigger is still that scared little kid. He hasn’t grown.

And when Skulldigger begins his beatdown, the red intensifies. He’s at his most dysfunctional in that moment, reveling in the same violence that screwed him up in the first place. Meanwhile, the glow of police lights fills the room. Each time they’re lighting up Skulldigger, they’re red, and when they light Reyes, they’re blue. She might be scared, even angry, but the blue is calm. Reyes isn’t allowing her emotions to take over. She’s level-headed.

Wands does beautiful work in this issue. He finds the perfect balance in stylization and minimalism. A “SNAP,” in the center of a double-page spread might look normal, but the crease between pages actually makes the sound look like it snapped in half. The sound of sirens are colored to mimic the police lights. The “WEEE” of the sound is red and the “OOOOO” is blue. Wands is finding the fun in the tiny details. No sound effect steals the show. They blend in perfectly with the rest of the story. But when you look closely at them, you’re amazed by their little quirks. Wands shows that violence is commonplace to these people. That’s why these sounds don’t look big and traumatic. But the small moments like the “SNAP” or the sirens show the sounds that stick, even with thick-skinned goons. 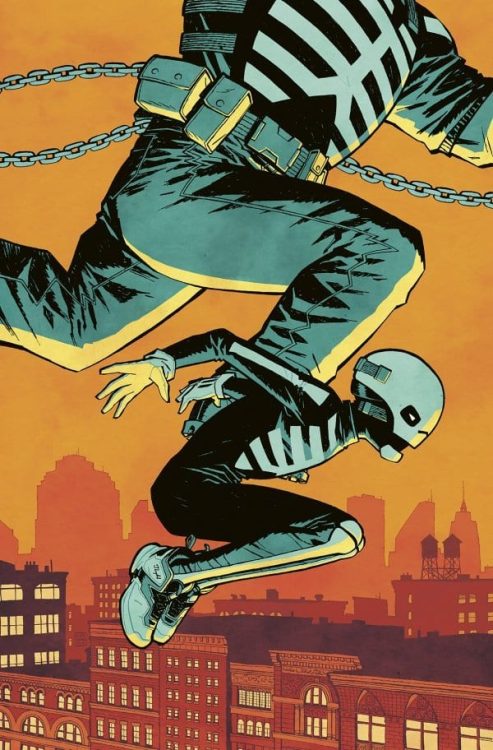 Skulldigger and Skeleton Boy #6 has so much going for it. Zonjic’s art and colors are gorgeous, and Wands’ letters are subtle masterpieces. But Lemire’s script just feels a little rushed. We breeze through moments we should live in for a while, as though he’s antsy to end the issue. Luckily enough, this series is so fantastic, a rushed ending doesn’t ruin it. Lemire, Zonjic, and Wands have still done some beautiful character work to get here, and that does not go down the drain. Dark Horse’s Skulldigger and Skeleton Boy is a brilliant series. This final issue is out February 24th at a comic shop near you!

SKULLDIGGER AND SKELETON BOY #6 has so much going for it. Zonjic's art and colors are gorgeous, and Wands' letters are subtle masterpieces. But Lemire's script just feels a little rushed. We breeze through moments we should live in for a while, as though he's antsy to end the issue. Luckily enough, this series is so fantastic, a rushed ending doesn't ruin it.Review: SKULLDIGGER AND SKELETON BOY #6 Screeches to a Halt