And I don’t know what else you really need to know about the new series from MARVEL featuring their greatest martial arts hero. Sure, I could go into how it’s the first monthly Shang-Chi has had since the 80s (not counting the various one-shots and minis he’s had since.) And yeah, I could spotlight how the book is written by Gene Luen Yang, who’s won awards and acclaim for his works “American Born Chinese” and “Superman Smashes the Klan.” And of course, I could point out that this is the first time Shang-Chi has had an Asian creative team at the helm of his book. Maybe that’s why the character is presented in a way that feels so authentic and contemporary while reconciling his problematic past. Take this exchange that happens after Shang-Chi is reunited with his former nemesis/turned partner/turned romantic interest Special Agent Leiko Wu:

“Shang, no offense, but your English sounds like a fortune cookie. It’s hard to take. You’ve been in the West for quite a while now. You know the language. Why do you talk like that?” – Leiko Wu

“I’ve found that if I slow my cadence and use ‘wise words’, Westerners look at me, rather than past me, when I speak.” – Shang- Chi

And with that, Yang is able to give greater depth to a characteristic that could be (and is) viewed as stereotypical.

Yang’s script crackles with clever dialogue, quick pacing, and good humor. I don’t want to give away any spoilers, except to say that the story not only has plenty of action, hearty chuckles, and a touch of romance, but also a cameo from my favorite giant lizard outside of Godzilla.

“You’re not telling us all that much!” – You, the reader of this review.

Well, allow me to quote the advance press from the Marvel PR folks: Written by award-winning writer Gene Luen Yang and drawn by artists Dike Ruan and Philip Tan, Shang-Chi’s new era will expand his mythos like never before by introducing the Five Weapons Society. Founded by Shang-Chi’s corrupt father, Zheng Zu, these elite warriors have acted as secret protectors of China for centuries, but when Sister Hammer makes a vicious grab for power, the group is thrown into chaos, and Shang-Chi is dragged back into a world he thought he left behind… Shang-Chi’s deep connection with the Five Weapons Society will forge a new destiny for the former Avenger, forever altering both his past and his future.

And that about sums it up. The book is full of action, intrigue, and family drama.

Oh, but they left out one crucial thing…

This book is fun!

SHANG-CHI #1 from Marvel Comics hits your local comic book shop on September 30, the book is written by Gene Luen Yang, with art by Dike Ruan and Philip Tan, Sebastian Cheng drops the color, and you will read Travis Lanham’s letter work. Shang-Chi was created by Steve Englehart and Jim Starlin, the character first appeared in Special Marvel Edition #15 (December 1973).

Are you planning to pick up SHANG-CHI #1 this week? Comment below with your thoughts. 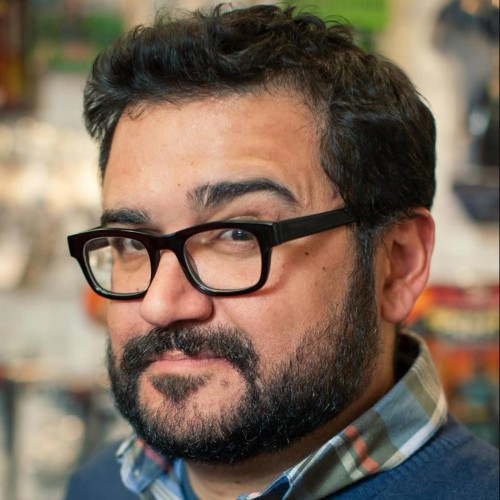 Elliott Serrano
As an infant, Elliott Serrano was rocketed to Earth from a dying planet. Upon arrival, he was subsequently exposed to cosmic rays, bitten by a radioactive spider and raised by apes. His tenuous mastery of the language you humans call ”English” came from years of watching Saturday morning kid shows and reading comic books. Already on the path to becoming a member of the socially awkward sub-sect called ”geeks and nerds”, his fate was sealed when he saw the movie Star Wars. When he is not fighting evil, saving the damsel in distress, or creating a device to prevent the Earth’s destruction by runaway meteorite, he searches for geek/nerd/comic-culture topics and events for his blog Geek To Me which first originated in the Chicago RedEye, a sib of the Chicago Tribune. He has been christened the “King of Geeks” in Chicago by sports tv/radio host Laurence Holmes; been dubbed “Chicago’s Clark Kent” by Eisner Award-winning artist Gene Ha; and is the “Chief Geek Officer” for the “Pretty Late with Patti Vasquez” Show on WGN 720 AM Radio Chicago. He also writes comic books, most recently the “Adventures of Grumpy Cat & Pokey” and “Army of Darkness” monthly series for Dynamite Entertainment; hosts a number of shows on YouTube; is a former “geek-dating & relationships” columnist for BleedingCool.com; and is the former associate editor and graphic artist for the comic & pop-culture website ComicsWaitingRoom.com. You can find him on Facebook (Facebook.com/Elliott.Serrano) and Twitter (@ElliottSerrano). As Chicago’s reigning Top Geek, Elliott awaits a suitable challenger to take him on for the title. He is also accepting applications for a sidekick.