Neil Gaiman returns to the concept that made him famous with DC/Vertigo’s one-shot Sandman Universe #1. Featuring the work of Si Spurrier, Nalo Hopkinson, Dan Watters, and Kat Howard as well, the issue will set up four brand new series: The Dreaming, House of Whispers, Lucifer, and Books of Magic.

A rift between worlds has opened, revealing a space beyond the Dreaming. Meanwhile, a book from Lucien’s library is discovered by a group of children in the waking world where it should not exist. Lucien calls for Matthew the Raven to seek out their master, Daniel, Lord of Dreams. As Matthew flies across the Waking World and others, he finds a young boy named Timothy Hunter who, in his dreams, has become the world’s most powerful magician—but in his nightmares, he is the world’s greatest villain. A new House has appeared in the realm of the Dreaming: the House of Whispers, with its proprietor, a fortune-teller called Erzulie. And elsewhere, Lucifer has fallen again, only this time he might be trapped in a Hell of his own design.

Sandman Universe #1 does what any good one-shot does: it gives you a clear, accessible setup. What’s special here is the world being set up, and that world is a re-introduction to a shared ‘Sandman Universe’. Gaiman, along with the crew of writers who will be guiding this universe forward, does a solid job of balancing exposition for the Vertigo virgins with a new a ‘deep cut’ mystery for Vertigo veterans. Using the raven Mathew (a Sandman fan favorite) as our guide is also a clever move. Not only is Mathew entertaining and amusing, but birds as guides is a long tradition in myths and stories, which is a huge part of what ‘The Dreaming” is about.

As good as the wraparound story is, each individual story/concept does feel a bit rushed; Tim Hunter could have used a few more pages and the sequence with Lucifer may be a bit confusing if you don’t know both the Vertigo and traditional Christian histories of the character.

The ending though sets up a great mystery, and the ‘rift’ concept makes you wonder if this could even be tied into Daniel’s (the Sandman) recent role in the main DCU’s Metal event.

Vertigo books have a long tradition of having great art, and this issue is no exception. The bulk of the art comes from Bilquis Evely, who will be drawing The Dreaming written by Spurrier) and she does a fantastic job. Her art is elegant and crisp. But the entire art team does a great job, and even though there is a difference in art and approach, there is still an overall feeling of ‘style’ to the different stories that helps build cohesiveness.

The lettering also deserves a mention, as fancy fonts and clever word balloons and narrative boxes help make this a complete package.

If you loved Sandman back in the day, you probably already have this. If you are curious about what the Vertigo phenomena was in the ’90s then this is a great primer. Either way, it’s great to have new classic Vertigo in comic shops and this one-shot will get you excited to see where these new titles are going to go. 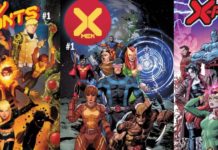 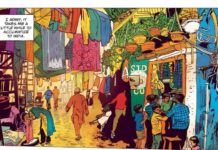 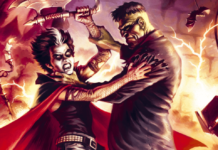