Review: RORSCHACH #6 Shows the Raw and Beautiful Mess of Life

There’s a comfort to be found in a well told story. When you know you’re in the hands of a creator who knows their craft, you can relax. You know they’ll hit all the right beats, you know their conclusion will be satisfying. But there’s a safety in those stories too. We don’t read those stories on the edge of our seats. It’s only when stories go off the reservation that our hearts rise to our throats. We nervously worry, because with big risks can come big disappointments. Or big payoffs. Writer Tom King, artist Jorge Fornes, colorist Dave Stewart, and letterer Clayton Cowles’ Rorschach #6 is a risky story, and it’s damn beautiful.

King’s script isn’t full of splashy comic book mayhem. It’s just a simple letter correspondence between The Kid and Rorschach. Laura, The Kid, is a 19 year old girl. She writes to Wil Myerson, an aging comic book writer who has been revealed to be this title’s Rorschach, to talk to him about his work. It’s easy to forget that King wrote Laura’s letters. They’re awkward, clunky, and full of angst. When Myerson responds, he does so in the polished tone of a professional writer.

But as the correspondence goes on, each writer begins to influence the other. Laura stumbles through heartfelt summaries of her life and Myerson philosophizes about his time on earth. But soon, Laura is philosophizing and Myerson is confessing his many disappointments in himself. It’s a stunning script, full of relatable lines that feel so organic to the characters. After this issue, we can finally understand this mysterious duo. And it’s hard not to see ourselves in them, despite their many misdeeds. 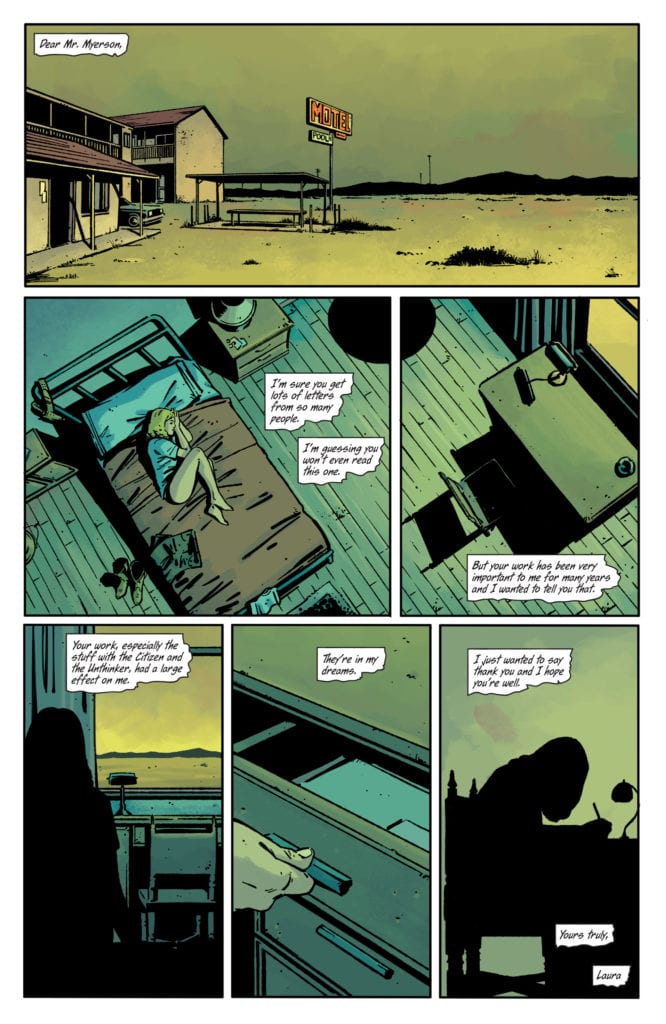 Fornes teaches us why these two have such a strong connection. His depictions of Laura mirror his depictions of Myerson, and vice versa. These are truly kindred spirits. When Laura talks about a time she was sitting in a church and she had a vision, Fornes leaves us with one final panel of her looking up at the vision with a smile on her face. So, when Myerson recounts a similar story, Fornes repeats this. We see Myerson as a little boy, looking up at the monster he’s imagining, with a gentle smile. But the two face each other. Laura is looking off of her page into the next and Myerson faces the page that came before. It’s as though Laura and Myerson are looking at each other, through the panels that are between them. These aren’t two separate moments, but one that they’re sharing, across space and time. There’s a kind of color coding Stewart uses in this issue. He presents scenes featuring different characters in particular hues. Laura’s memories are yellow. Myerson’s memories are red. The modern day scenes are often shown in a blue or purple hue. When Laura and Myerson finally meet, the scene settles into a bright orange. We see how these two are affecting each other’s whole world. Myerson’s outlook is being brightened by Laura, and she’s beginning to understand the bloody undertones of life. And in the final page, the blank card stock between the last scene and the back cover, Stewart does something subtle but brilliant. The page looks like it’s stained by blood. But it’s old blood that landed unevenly. So, the page is covered in the deep reds and pale yellows of dried blood. It’s one final reminder of where Laura and Myerson’s story is headed.

It’s through Cowles’ alignment of captions on the page that so much of each letter’s tone is conveyed. When Laura first writes a letter to Myerson, the captions are scattered about. She seems sheepish and maybe a little panicked. And when Myerson responds, it’s just a little bit tidier. He seems to be laid back in his response, just as are eyes can almost lazily scan the page and take it all in.

When Laura responds, the captions all line up on one side of the page. It’s professional, careful, and it’s suddenly aware of the fact that Myerson is actually going to read it. This goes on throughout the issue. There are moments where captions overlap each other, like Laura or Myerson are itching to communicate that next line, and there are captions that have huge gaps between them, like they feel pained by the fact that they have to say goodbye. Cowles sets the roadmap for Laura and Myerson’s relationship and seamlessly shows us how the two grow together. 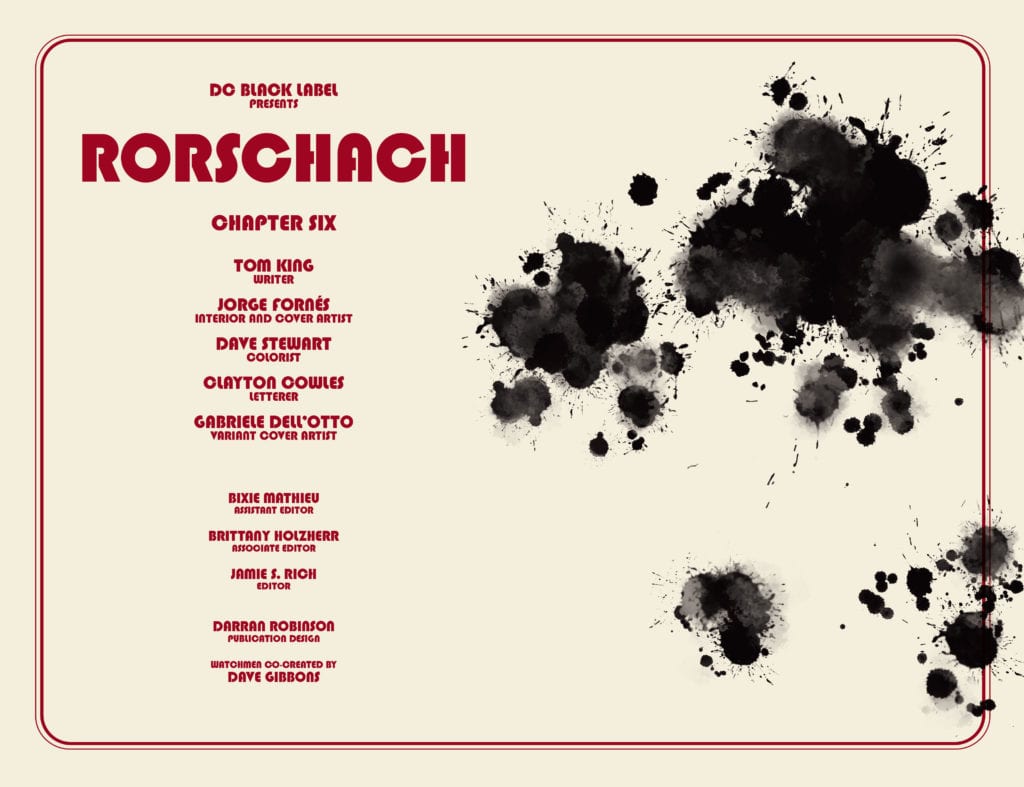 There’s so much to say about DC Comics’ Rorschach #6. It’s a script that feels real and true to life. This creative team isn’t playing by the rules anymore. They’re going to tell a story that might scare us. It’s not a story that’s full of heroes and villains. It’s a story that’s dominated by human beings, in all their dangerous glory. We come to see and even understand where even the most extreme characters are coming from. Pick up Rorschach #6, out from DC Comics, at a comic shop near you! It’s a must read!

There's so much to say about DC Comics' RORSCHACH #6. It's a script that feels real and true to life. This creative team isn't playing by the rules anymore. They're going to tell a story that might scare us. It's not a story that's full of heroes and villains. It's a story that's dominated by humans. We come to see and even understand where even the most extreme characters are coming from.Review: RORSCHACH #6 Shows the Raw and Beautiful Mess of Life