Review: REAVER #10 Solves A Mystery And Breaks Your Heart

REAVER #10, available from Image Comics on August 5th, finally brings Essen and Rekala face-to-face with the mysterious Stagger and the plan he has for all those stolen children. Justin Jordan’s story is doesn’t waste any time getting to the heart of the mystery, and Niko Henrichon’s art sets every panel on fire, literally and figuratively. To see how we got this far, check out our review of the previous issue here.

Becky Cloonan’s cover is a bit of a bait-n-switch but not in an unsatisfying way. Featuring the scowling face of Stagger’s lieutenant, scarred and pumped up from the dose, Cloonan’s cover hints at the big battle scene at the end of the issue, and it’s a doozy.

Justin Jordan’s story gets right to the point answering all the lingering questions since the first issue of the arc. Where have all the children gone? Why were they stolen? Who is this mysterious Stagger? Without spoilers, all these questions are answered in efficient short order, and it’s all done in the context of an issue that’s almost entirely one continuous fight scene. Essen has embraced his inner berserker to glorious effect, and Rekala is… well… Rekala at her best.

Jordan does throw in a cliffhanger curve ball with the reveal of Stagger that begs a whole list of brand new questions. The ending builds a huge level amount of “What the…?!?!” energy to set up the final issue. I’m curious to see how Stagger’s revealed identity pays off in the run’s conclusion. Stay tuned for that review.

You can tell Niko Henrichon is just having fun at this point. Essen is laughing AND on fire while he punches an evil henchman’s jaw completely off his face. Rekala, easily the breakout character of 2020, shows a surprising few moments of compassion once she finds the children, than quickly shifts into skineater mayhem once the villains go on the offensive.

Most of these scenes are accomplished with dynamic motion in the panels, a keen understanding of gore that makes sense for the battle without being gratuitous, and an understanding of how to reflect emotion through the faces of characters that more often let their blades do the talking. Henrichon exhibits herculean execution by drawing an engaging comic that’s almost all battle, and it’s done really well.

Henrichon’s coloring is pure, dramatic mood in this issue. Prior issues were excellent demonstrations in the use of yellows to show firelight for lighting and shadows that punch up the emotion. In this issue, the use of yellows, particularly in the “harvesting room,” cast a sickly veneer on the whole scene that amps up the gruesomeness of the children’s plight. Henrichon’s coloring doesn’t just amplify mood. It changes the entire tone of the scene to great effect. 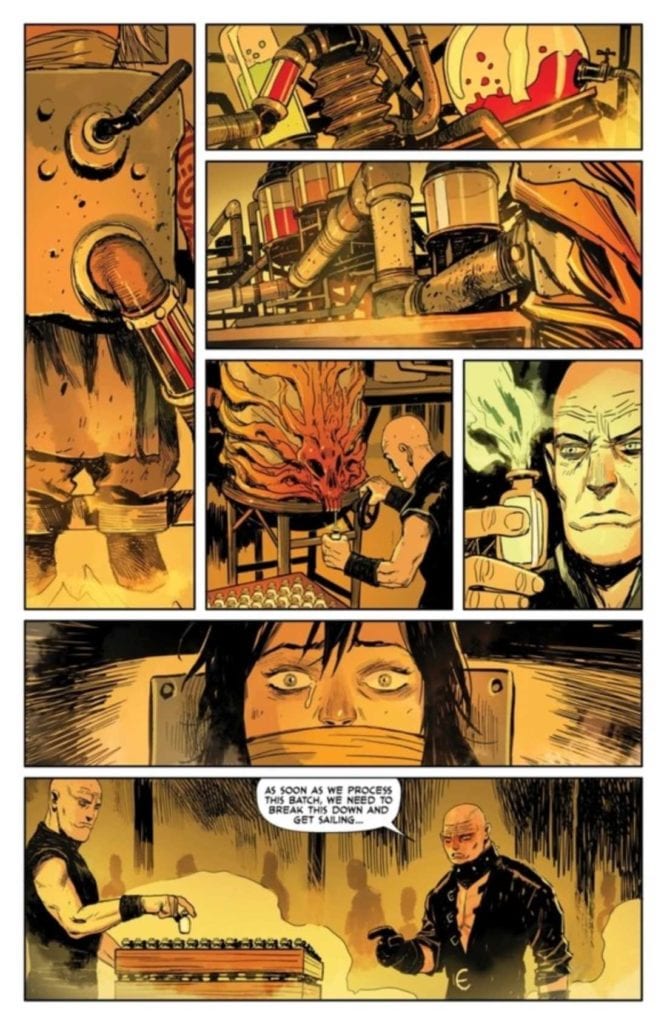 Clayton Cowles’ minimal amount of lettering in this issue is clean and concise. The only sound effect of note is a body “CRASH”-ing through a wooden door that looks great. Otherwise, the dialog placement is excellent, and Cowles’ lettering keeps you moving through a briskly paced issue.

REAVER #10, available from Image Comics on August 5th, answers all the right questions while opening the door for many more; all through the lens of of brutal, non-stop action. I’m eagerly anticipating how this run will end in the next issue.

REAVER #10 answers all the right questions while opening the door for many more; all through the lens of of brutal, non-stop action. I'm eagerly anticipating how this run will end in the next issue.Review: REAVER #10 Solves A Mystery And Breaks Your Heart