Writer Simon Spurrier and artist Bilquis Evely helm what may be the most tense and dread-inducing chapter of The Dreaming thus far with issue #15: “The Crown, Part One.”

Wan, the fully-sentient “dream machine” that has taken Dream of the Endless’ place has assumed control of the Dreaming as it has seen fit. However well this entity may mean, it still has the callous touch of a soulless mind. The decisions it makes have started to bring more harm than good, and Matthew the Raven’s need to find the true Dream Lord has reached its climax. There’s even more to Wan than any of the Dreaming’s residents could possibly know, and with it in control of people’s subconscious, reality begins to head in a devastating direction.

For the first issue of his final arc on this series before G. Willow Wilson takes command, Si Spurrier trades in the humor and sweetness of the previous issue for all-out dread and horror in this one. This issue is full of trademark Sandman narrative queues, such as the repetition of a key idea and the numerous important anecdotes of those having dreams outside the primary story. Spurrier has always been able to ape Gaiman’s writing style when necessary for this series, but what he can do with character and narrative is a skill all his own. Longtime favorite Sandman universe characters are still reacting to the leadership change and their own struggles, but none as hard as poor Abel with the loss of his brother, Cain. Having to pull double duty as the keeper of Secrets and Mysteries now is doing more trauma to the character than can be stated here, and Spurrier handles it with a deft hand. The shocking revelations and sudden left-hook twists will stick in the mind of any reader, and it all feels earned. All of the different and seemingly unrelated plots introduced in earlier issues are becoming intertwined in true Sandman fashion, making it an absolute treat to see where it could be going next.

Once again powerhouse artist Bilquis Evely returns to give Spurrier’s words form, and as always she knocks it out of the park. Her ability to blend grounded realism with visions beyond absurd or fantastical and maintain such a huge range of expression and detail is likely her greatest artistic feat, and it’s on full display here as usual. This issue is slightly more grounded because of its plot, but it still gives Evely plenty of room to stretch her talents on the full cast of characters and the emotional turmoil they currently face. Her pencils are brought to life by Mat Lopes’ colors, which cater to every bit of life and detail the art deserves. An endless palette of colors, from deep blacks to neon pinks, breathes life into each issue of The Dreaming and this issue is no different. It’s simply jaw-dropping work from the art team behind this series.

Simon Bowland’s lettering is sharp and clear, while also adhering to concepts set forth in Gaiman’s Sandman. For this issue specifically, the special lettering Matthew the Raven’s dialogue gets is replicated perfectly while still obviously being easy to read. 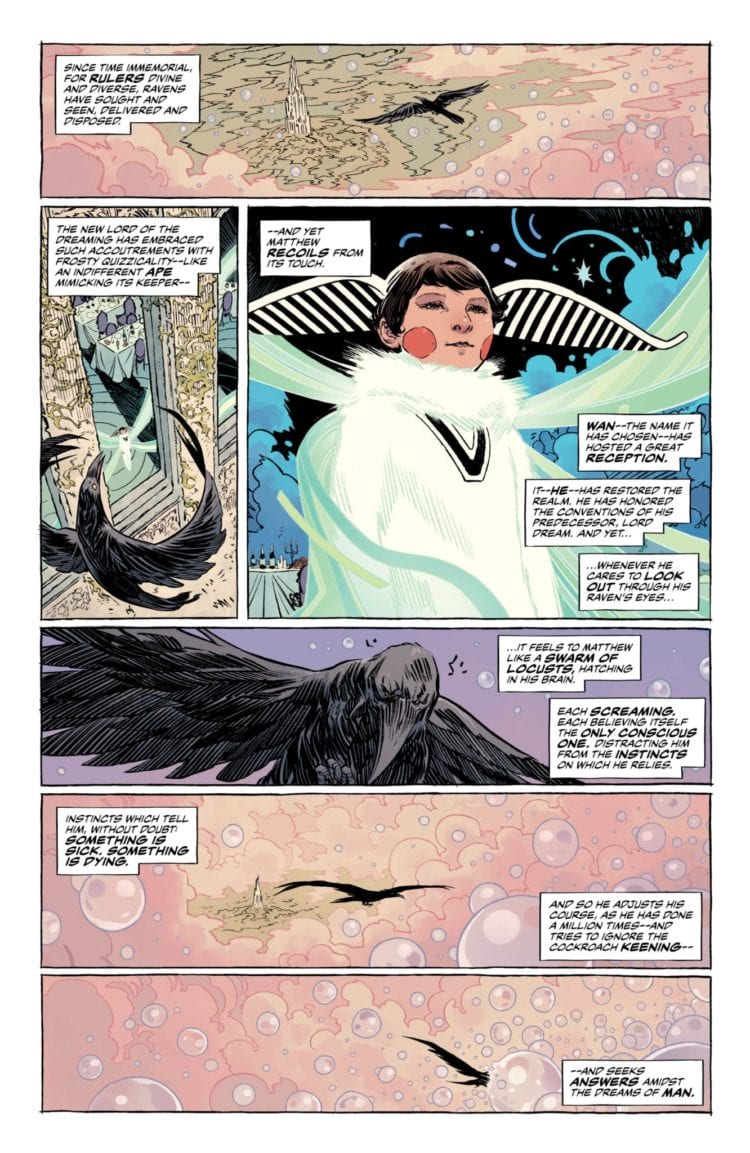 The Dreaming #15 kicks off the final arc of Si Spurrier and Bilquis Evely’s run with a thick atmosphere of foreboding and suspense. Eloquent and beautiful without being too dense, The Dreaming still proves itself to be a worthy successor to Sandman and the rightful flagship title of DC’s “Sandman Universe.” It will certainly be a privilege to witness where Spurrier and Evely take this story in its final three issues.

Si Spurrier and Bilquis Evely once again deliver a chapter of "The Dreaming" that is both beautiful and terrifying to behold.Review: Reality Grows Ill In THE DREAMING #15